In his new show on Aaj Tak, the anchor showed a quotation originally by satirist Jonathan Swift but commonly attributed to Mark Twain. 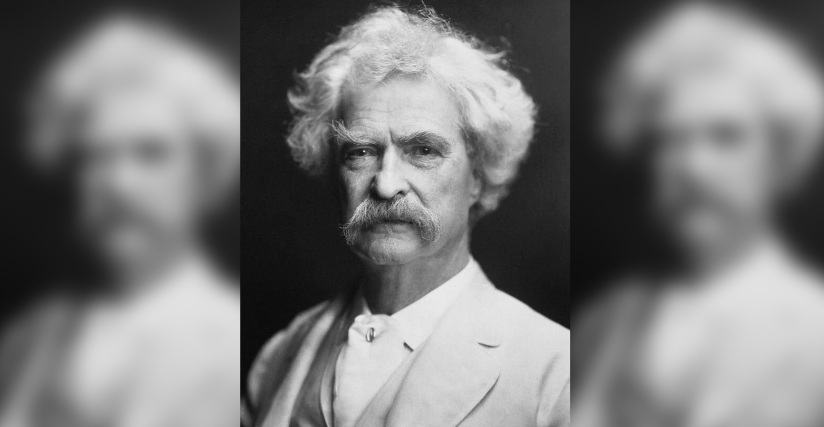 A portrait of the American writer Mark Twain taken by A. F. Bradley in New York, 1907. Photo: Public domain/Wikipedia

Two weeks ago, journalist and news anchor Sudhir Chaudhary announced his resignation from his post as CEO of Zee Media to start his own venture. Following this, it was revealed that he had joined the Hindi news channel Aaj Tak, which is part of the India Today Group.

On July 19, Chaudhary’s new show ‘Black & White’ premiered on Aaj Tak. In the first episode of the show, the anchor, while referring to a rumour that was circulated regarding the Agnipath scheme, mentioned a quote attributing it to American writer and humorist Mark Twain. He featured the following statement, “A lie can travel halfway around the world while the truth is still putting on its shoes.”

The official Twitter handle of Aaj Tak also tweeted the clip of the show along with the quote. Prior to Sudhir’s show, on July 9, a video uploaded on the official Instagram page of Aaj Tak also features this phrase. The adage is attributed to Mark Twain in this video as well.

It is worth noting that the phrase has been attributed to different individuals from time to time. Several tweets that have credited Mark Twain or Winston Churchill for the quote. This includes former American football player Colin Kaepernick, journalist Arpit Sharma of Dainik Bhaskar, the Twitter handle of Bihar Congress, Umashankar Singh of NDTV and the Twitter handle Hindi Panktiyan.

Alt News performed a keyword search, which led us to a report featured in The New York Times. The article, written by Niraj Chokshi features a statement from researcher Garson O’Toole. “Commonly attributed to Mark Twain, that quotation instead appears to be a descendant of a line published centuries ago by the satirist Jonathan Swift. Variants emerged and mutated over time until a modern version of the saying was popularised by a Victorian-era preacher”, said Garson. 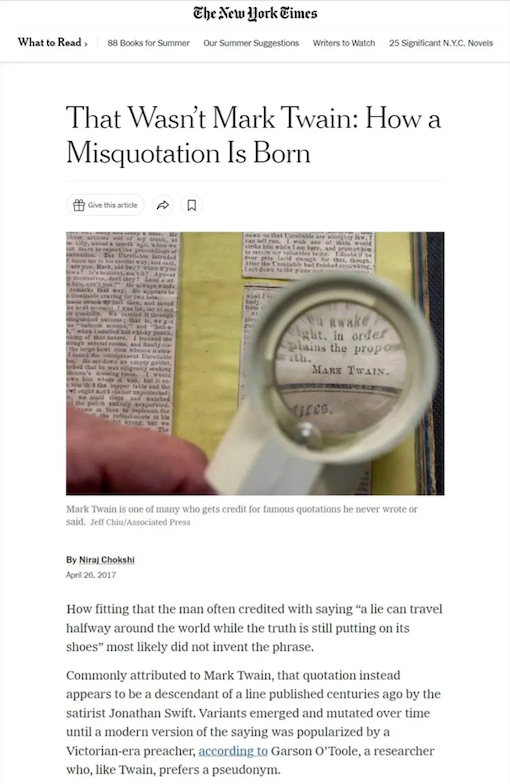 Garson O’Toole runs a website called ‘Quote Investigator‘. On the portal, he publishes multiple pieces of research investigating the origins of famous quotes. We examined the ‘Quote Investigator’ platform for more information and found a detailed report on the Mark Twain quote. With the help of several references, O’Toole concludes that the adage has been in circulation for more than 300 years. He states further, “Jonathan Swift can properly be credited with the statement he wrote in 1710… At this time, there is no substantive support for assigning the saying to Mark Twain or Winston Churchill.”

We also came across a tweet posted by the BBC TV show QI. It confirms that the line has been falsely attributed to Mark Twain, Winston Churchill and Thomas Jefferson.

"A lie can travel halfway around the world while the truth is putting on its shoes" has been falsely attributed to Mark Twain, Winston Churchill and Thomas Jefferson. It's most likely a twist on a Jonathan Swift line: "Falsehood flies, and truth comes limping after it."

International Fact-Checking Network (IFCN)’s fact-checking wing PolitiFact also referenced O’Toole’s ‘Quote Investigator’ portal and wrote that variations of the quote have surfaced from time to time, each attributed to different individuals. However, it likely originated from an adage by Jonathan Swift dating back to 1710.

To sum it up, on the very first episode of his new show ‘Black & White’ on Aaj Tak, host Sudhir Chaudhary featured a quote which he attributed to American humorist Mark Twain. As per researchers, there is no substantive proof to suggest that Twain had coined the phrase.