The Storm Lake Times won the Pulitzer Prize for editorial writing for its coverage taking on Iowa's powerful agricultural interests, including the Koch Brothers. 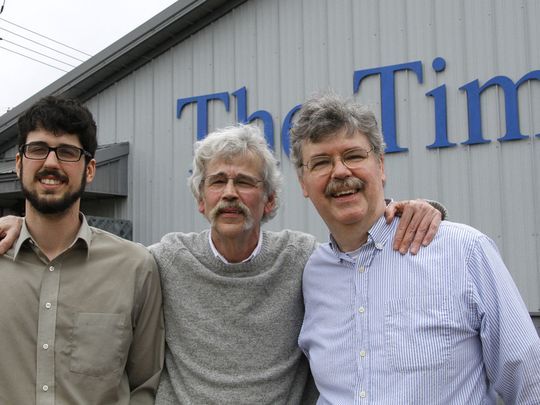 Hard-hitting and sensitive journalism remained undaunted in the US, despite steep financial pressures and visible antagonism from the new presidential administration, as the industry presented its highest honours on Monday, the coveted Pulitzer Prizes.

While the topics that won varied from reporting done on the presidential campaign and election to the Russia’s expansion of power, the winners range from industry bigwigs like The New York Times and Washington Post to surprise winner The Storm Lake Times.

Storm Lake Times is a biweekly newspaper serving the Buena Vista County in rural Northwest Iowa. With a circulation of 3,000, it is one of the smallest enterprises to win a Pulitzer, according to the Sioux City Journal. Storm Lake Times is a small, family-run newspaper with Art – who co-owns the paper with his brother John Cullen – serving as editorial writer, part-time reporter and city editor. His wife and son also work at the paper, which mostly covers local stories, according to Poynter. It was the paper’s persistent and effective coverage of local agricultural issues that won it the prize.

Art won the award for “for editorials fueled by tenacious reporting, impressive expertise and engaging writing that successfully challenged powerful corporate agricultural interests in Iowa,” the Pulitzer citation read. According to The Des Moines Register, Art’s editorials attacked the secrecy and maladministration surrounding the lawsuit that had been filed by Des Moines Water Works lawsuit against the agricultural interests for funnelling nitrates into the Raccoon River, polluting a primary water source for metro Des Moines residents. The small-town newspaper worked with Iowa Freedom of Information Council to force the release of documents backing them up.

In one of his editorials, Art wrote: “Anyone with eyes and a nose knows in his gut that Iowa has the dirtiest surface water in America”. The Des Moines Register also reported that the Cullen brothers and Art’s son, Tom, worked together to do most of the reporting and investigation that was presented in the editorials.

Art beat out competition from the Houston Chronicle and The Washington Post to take home the coveted Pulitzer.  Although he runs a small newspaper, Art sees no reason for an editorial in a small Iowa newspaper to not be as good as one published in big-city newspapers.

A joint effort by ProPublica and the Daily News won the award for public service for revealing abuse of law by the police, while the prize for breaking news reporting went to the staff of East Bay Times for their coverage of the “Ghost Ship” fire. Eric Eyre of The Charleston Gazette-Mail won the award for investigative reporting, while staff at the Salt Lake Tribune took the prize for local reporting. The award for explanatory reporting was given to a sprawling network of journalists called The International Consortium of Investigative Journalists, McClatchy and The Miami Herald for their work on the Panama Papers.

David A. Fahrenthold of the Washington Post won for his national reporting of the US presidential campaign, with The New York Times staff walking away with the prize for international reporting and the paper’s C.J. Chivers winning the feature writing prize. Peggy Noonan won the award for commentary for her column in Wall Street Journal, while Hilton Als of the New Yorker won the prize for criticism for his “bold and original reviews that strove to put stage dramas within a real-world cultural context”. Jim Morin of the Miami Herald won for editorial cartooning for delivering “sharp perspectives through flawless artistry”, freelance photographer Daniel Berehulak won for breaking news photography and E. Jason Wambsgans of the Chicago Tribune won for feature photography.

The award for fiction went to Colson Whitehead for his novel The Underground Railroad, a saga of America, while Lynn Nottage’s powerful drama Sweat won for drama. Heather Ann Thompson won the prize for history with her narrative history Blood in the Water: The Attica Prison Uprising of 1971 and Its Legacy, with Hisham Matar winning for biography or autobiography with his work titled The Return: Fathers, Sons and the Land in Between. Matthew Desmond won for general nonfiction with his exposé Evicted: Poverty and Profit in the American City, the prize for poetry went to Tyehimba Jess for his collection of poems titled Olio, which presents a combination of many poetic styles while Du Yun’s operatic work Angel’s Bone won for music.