BBC's Shafat Farooq and freelance photographer Saqib Majeed were hit by personnel while they were covering a protest. 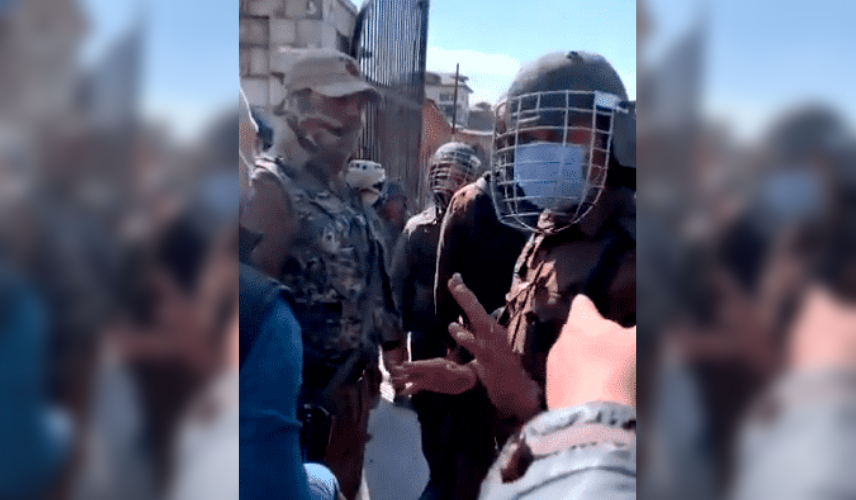 A screengrab from a video showing the photographers with police personnel. Photo: Twitter/@AakashHassan

New Delhi: The Kashmir Press Club has condemned the assault by police on two photojournalists while they were at work covering a protest in Srinagar.

The journalists, BBC’s Shafat Farooq and freelance photographer Saqib Majeed, were at the Nowhatta area of Srinagar. They were covering protests that had broken out at a congregation for Friday prayers, according to the KPC’s statement.

Farooq told KPC that the attack by police took place after the initial unrest had subsided. “As we were covering the protesters, there was a chase by police. After the situation had settled, a policeman came from nowhere and hit me in my back,” he said.

When Farooq asked the policeman why he had been hit on the back, senior police officials apologised on his behalf.

Journalist Aakash Haasan has tweeted a video clip showing what appears to be police personnel attempting to placate the photographers.

The authorities in #Kashmir are making it impossible for journalists to work.

In solidarity with fellow journalists—Shafat Farooq and Saqib Majeed—who were thrashed by police while covering protests in Srinagar today. #JournalismIsNotACrime
pic.twitter.com/oggqLZ18QD

Farooq has been having severe back pain since being hit, he told KPC.

The KPC’s statement says local news reports has quoted the other journalist as having said that a policeman assaulted him out of the blue as well. “…[O]ne of them caught me by my collar, slapped me several times and even dragged me on the road,” Saqib was quoted as having said.

The Press Club urged police to sensitise personnel on how to conduct themselves and respond to the press and mediapersons during contingent situations.

“The KPC also hopes that the press is allowed to conduct its professional duties without fear and coercion,” it said.

Kashmir’s journalists, fresh off a one-and-half-year spell without 4G internet, have braved no end of difficulties for which the state is directly responsible.

Recently, the Clooney Foundation for Justice (CFJ), announced it will monitor the trial of Kashmiri journalist Aasif Sultan, who has been in detention for more than two years on terror charges.

Independent photographer Masrat Zahra and senior journalist Gowhar Geelani have been booked under the draconian Unlawful Activities (Prevention) Act, under which a person can be jailed up to seven years.

Among several other cases, authorities recently sealed the Srinagar office of the Kashmir Times, a prominent daily in Jammu and Kashmir, without offering any reasons behind such government action. The paper’s owner Anuradha Bhasin had been on the forefront of the legal fight for restoration of 4G internet.

The Jammu and Kashmir police also registered FIRs against two Kashmiri news portals based on a complaint from the Indian Army. The two portals, The Kashmir Walla and The Kashmiriyat, had reported that a religious school in south Kashmir’s Shopian district had been ‘forced’ by the Army to hold a Republic Day function on January 26, which the Army complained was baseless and ‘fake’.