Members of the state’s leading journalists' union say they will fight this 'attack on media freedom'. Kozhikode: The Kerala Union of Working Journalists (KUWJ), the largest journalists’ body in the state, organised statewide protests demanding the release of Siddique Kappan, a member of the union who has been arrested and charged with sedition and provisions of the Unlawful Activities (Prevention) Act (UAPA) by the Uttar Pradesh police.

Journalists from different news organisations participated in a protest event held in Kozhikode on Friday. Similar protests were held across the state.

E.S. Subhash, general secretary of KUWJ, said the union is viewing the case “very seriously”. “This is a clear attack on media freedom,” Subhash, who led the protest in Thrissur, told The Wire.

“He (Siddique) has been a journalist in Delhi for several years, and went to report a very serious issue [the Hathras case],” Subhash said.

While speaking at the protest gathering in Kozhikode, senior journalist Kamal Varadoor said the journalistic fraternity is afraid for Siddique’s future. “We don’t know what will happen to him,” he said. “Siddique should be released immediately. This is not a demand of Kerala journalists, but of the entire Indian journalist fraternity.” 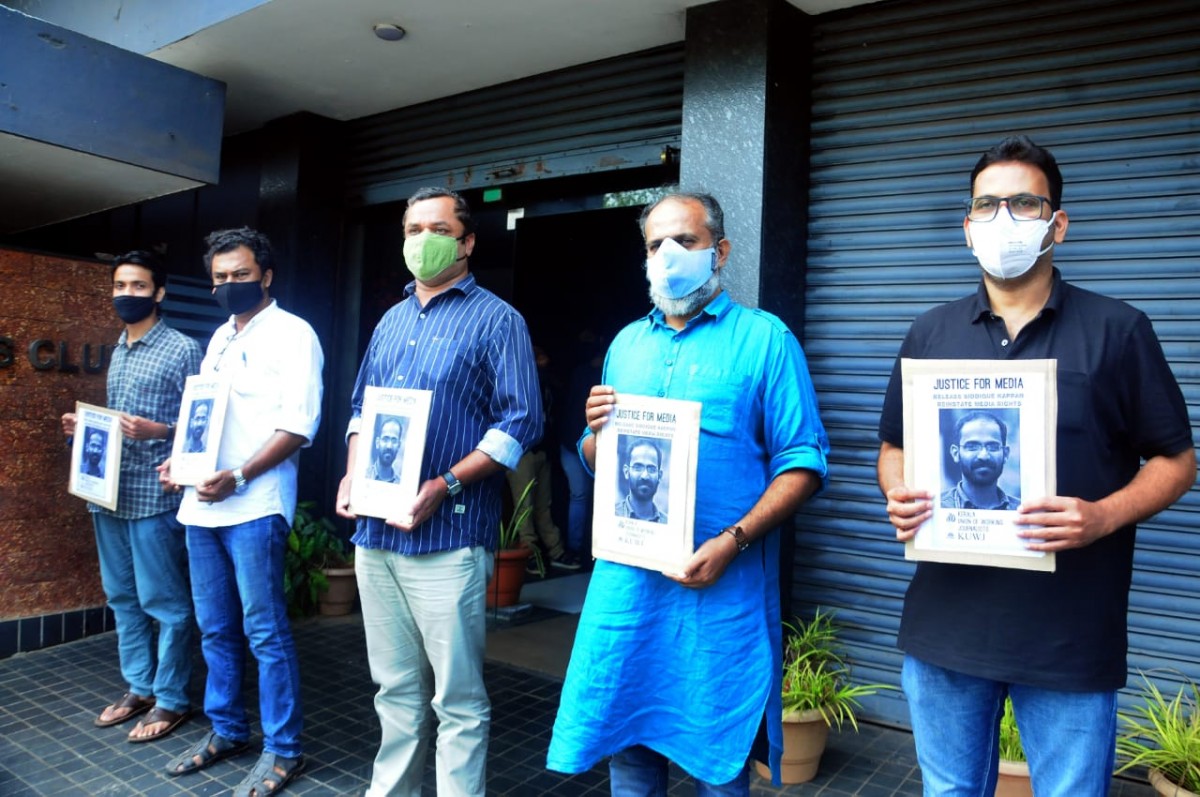 Another Kozhikode-based journalist and KUWJ vice-president P.V. Kuttan said the “UAPA is a law that should not be charged against anyone, leave alone a journalist. Kerala civil society and people of Kerala in general are against this very law.”

Firos Khan, Kozhikode district president of the KUWJ, said Siddique’s arrest is “an effort to silence the dissent”. “If it is Siddique today, tomorrow it can be anyone,” he said.

Firos also said what was happening in Hathras is an “attempt to cover up a series of illegal actions by the government”. “The UP authorities appear to be afraid of journalists who may expose those illegal actions,” he said, adding that the journalists’ fraternity will fight “until we get Siddique released”.

The Friday protest came after the KUWJ’s decision to strengthen its efforts for Siddique’s release.

“All the press clubs in the state today conducted programmes for Siddique’s release,” Subhash told The Wire. He also said the union is planning a public awareness campaign through social media about Siddique’s case.

On Thursday, the KUWJ state committee asked all its district units to hold protest programmes on Friday.

“Our Delhi unit secretary Siddique Kappan, who was arrested by the UP police, has been under unjust detention for last four days with sections of sedition and UAPA charged against him,” said the KUWJ letter sent to its district units.

The letter also noted that even though the union was trying legally and politically, Kappan’s immediate release has not been guaranteed. “Our efforts (to release Kappan) will be successful only if the public pressure too gets strengthened against the illegal arrest and detention,” the letter said.

Several other press bodies, like the Delhi Union of Journalists, Press Club of India, the Press Association and the Indian Women Press Corps, also demanded the reporter’s release.

The Committee to Protect Journalists also called on the Uttar Pradesh government “to immediately release” Kappan and “drop any investigation into him”.

Subhash said many MPs from the state, from both ruling and opposition parties, sent letters to the prime minister demanding the journalist’s release. The KUWJ also approached chief ministers and DGPs of both Uttar Pradesh and Kerala. V. Muraleedharan, the lone Union minister from the state, has also been approached by the KUWJ for Kappan’s release.

Kappan, a journalist who wrote for Malayalam-language news organisations, was arrested along with three others by the UP police in Mathura on Monday when they were travelling to Hathras, where a Dalit woman was gang-raped and brutally assaulted. Siddique and others were eventually booked under provisions of the UAPA and sedition, before they were remanded to 14 days’ judicial custody by a local court in Mathura on Tuesday.

In an affidavit submitted to the Supreme Court on the same day, the UP government claimed that the protests demanding justice for the Dalit woman involved a “criminal conspiracy to spread caste conflict, instigating violence, incidents of vicious propaganda by sections of media and political interests”.

However, there has been a series of criticism against the Yogi Adityanath government and the UP police for their handling of the case, including targeting of the protestors and attempted manipulation of media coverage.