With the Killing of Shujaat Bukhari, a Fearless Voice in Kashmir Media Silenced

The assassination of the veteran journalist has sent shockwaves through the journalistic community. 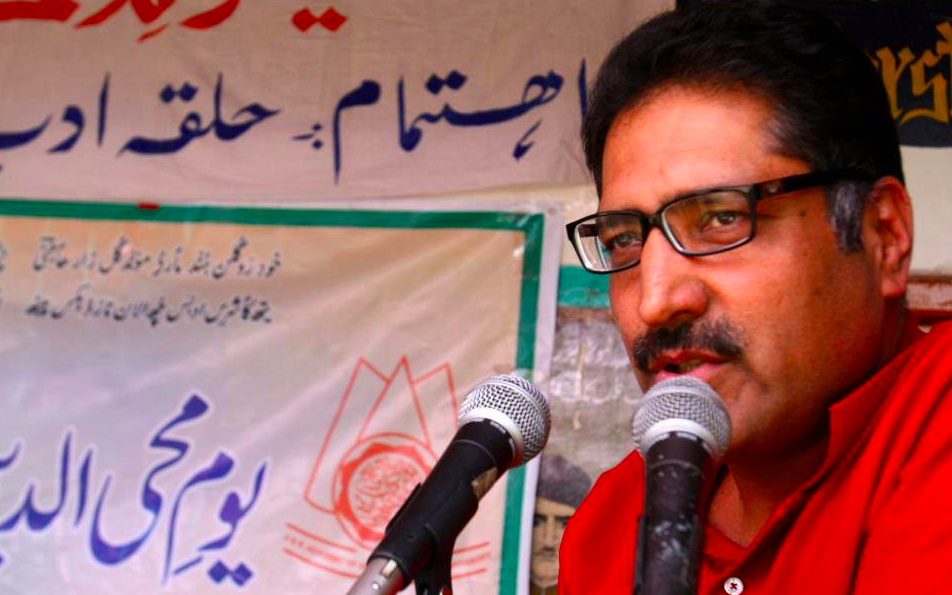 Srinagar: Senior journalist Shujaat Bukhari, who was shot dead by unidentified gunmen on Thursday evening, was a prominent face of Kashmiri journalism who had survived an assassination attempt in 2006.

A journalist for almost three decades, Bukhari was fired at from close range outside his office in Srinagar’s busy Lal Chowk at around 7:15 pm when he was leaving for home in his car – minutes before Iftar. His two security guards were also killed in the attack.

Tall and distinguishable, 50-year-old Bukhari was editor-in-chief of English daily Rising Kashmir which he launched in 2008. In the years to come, he started Urdu daily Buland Kashmir, Kashmiri vernacular Sangarmal and Urdu weekly Kashmir Parcham.

Bukhari’s association with the newspaper lasted 15 years, and during the period he reported on the Kashmir turmoil widely. His write-ups on Kashmir conflict also featured in national and foreign media houses, including fortnightly magazine Frontline and BBC.

A native of Kreeri village in Baramulla, Bukhari was abducted by unknown gunmen in 2006, but he managed to escape following which he was provided security by the government. 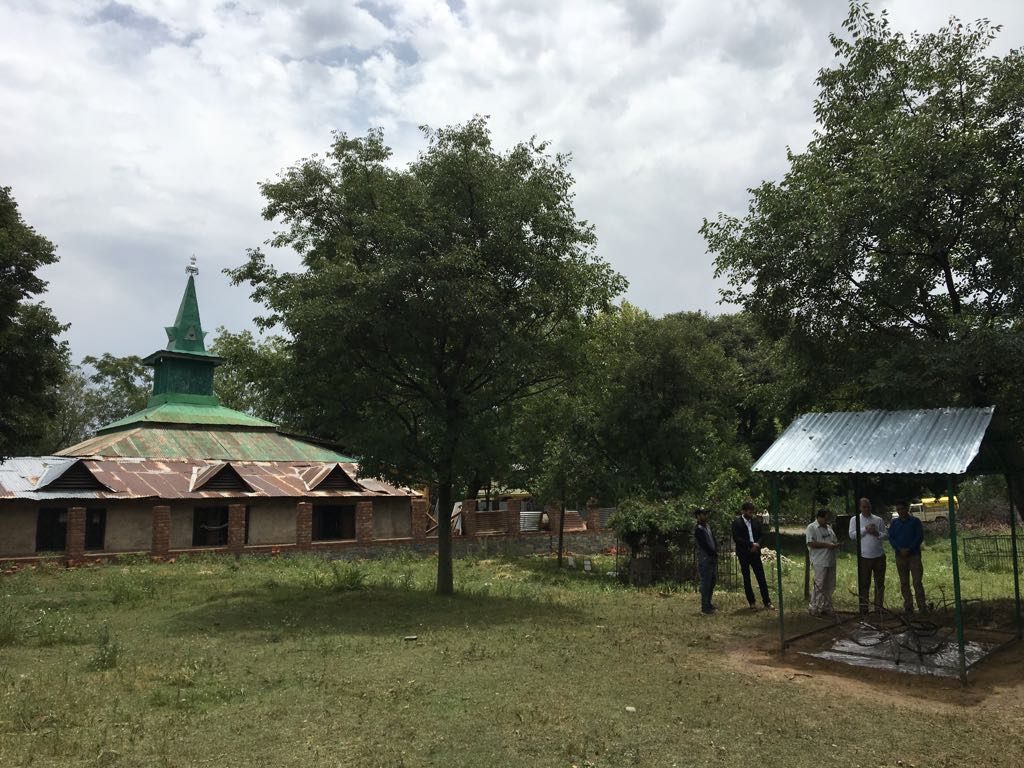 Shujaat Bukhari’s grave in the foreground, at the back is the Kreeri village mosque in Baramulla, Kashmir. Credit: The Wire

Survived by his wife Tahmeena and two children – a daughter and son – both minors, Bukhari had moved from Kreeri to Srinagar a few years ago. His brother, Basharat Bukhari, is a senior People’s Democratic Party leader and a minister in the state government.

A known literary and cultural activist, Bukhari served as the president of Adabi Markaz Kamraz, a literary forum that works for the promotion of Kashmiri language.

A frequent traveller across the globe, Bukhari earlier this month attended the Global Editors Network Summit in Lisbon that focused on the challenge of fake news. Last month when the Centre announced a unilateral ceasefire in Kashmir for the holy month of Ramzan, Bukhari was among those who welcomed the decision, terming it as a “glimmer of hope for common people who have been suffering due to the continuous grind of violence”.

In December 2015 Bukhari survived a massive stroke when he was in Jammu. He was flown to AIIMS, New Delhi, where he remained admitted for three months before his return home.

Known for encouraging young and budding journalists in Kashmir, Bukhari, an avid social media user, would often talk about the threat to Kashmir journalism in a conflict situation. In an article for the BBC in 2016, Bukhari wrote that since the outbreak of armed rebellion in the Valley, media in the region has had to work on a razor’s edge in what is “effectively the world’s most heavily militarised zone”.

“Thirteen journalists have been killed during the conflict since 1990. Threats to life, intimidation, assault, arrest and censorship have been part of the life of a typical local journalist. Journalists have been targeted by security forces and militants alike. Publications have been denied federal government adverts -a key source of revenue for smaller newspapers,” Bukhari wrote. The Rising Kashmir was one among many newspapers which have faced censorship in the past.

In one of his last tweets, the veteran journalist rebuffed allegations that he was a ‘quasi-Islamist’ and responsible for ‘biased reportage’. “In #Kashmir we have done Journalism with pride and will continue to highlight what happens on ground,” Bukhari tweeted. In another tweet he quoted UNHRC’s first-ever report on human rights situation in Kashmir.

It is unfortunate that a credible think tank like @orfonline should allow this diatribe in absence of the person referred to. In #Kashmir we have done Journalism with pride and will continue to highlight what happens on ground. @samirsaran https://t.co/bGjajFT9yb

His killing is third such tragic incident in Srinagar’s Press Colony. In 2003, Parvaz Mohammed Sultan, editor of a local news agency NAFA was shot dead in his office there. Prior to Sultan, in 1995, cameraman Mushtaq Ali was killed in a parcel bomb attack that was intended at former BBC correspondent Yusuf Jameel who, however, escaped with injuries.

Late in the night, J&K Police released a CCTV grab of the alleged assailants, asking people to help identify them. “It was a targeted killing. The preliminary investigation has shown that around three to four gunmen were involved, but the number could be more,” said a senior police official posted in Srinagar. 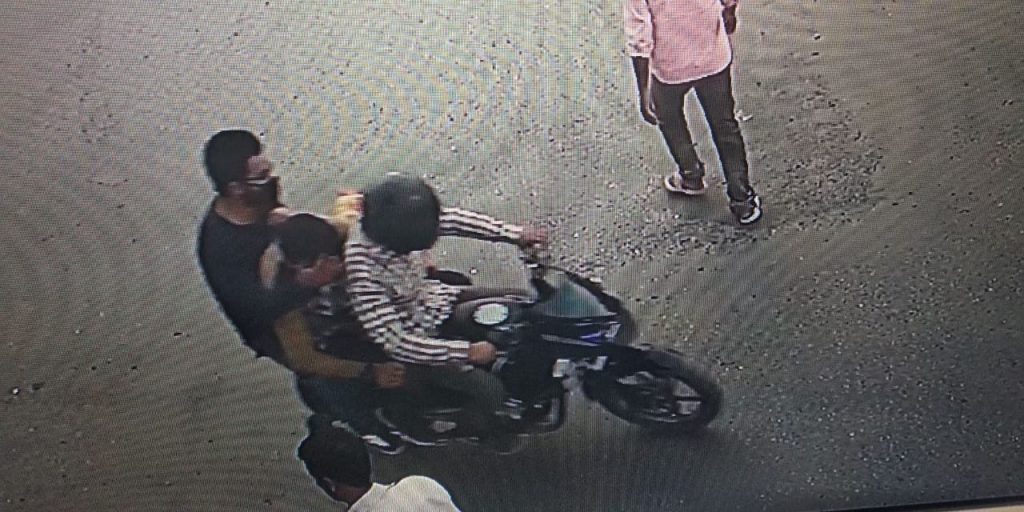 A CCTV grab of the alleged assailants involved in the killing of Bukhari.

He said the police are likely to constitute a SIT to investigate the killings, which happened on the eve of Eid, leaving Kashmir stunned and invoking all-round condemnation.

As the tragic news broke out, chief minister Mehbooba Mufti rushed to the police control room where his body had been brought after he was declared dead by doctors at SMHS hospital. Leaving from there, Mehbooba broke down while recalling her recent meeting with Bukhari.

“This is really shocking. What can I say? Only a few days ago he had come to meet me,” an emotional Mehbooba told reporters.

Even in the last tweet he put out he was defending himself, his colleagues & his profession. He died in the line of duty doing what he did best & loved doing – journalism. #ShujaatBukhari https://t.co/xEA2hg2xp1

“Deeply saddened and shocked by tragic news of Shujaat Bukharis killing! Such inhumanity is unpardonable and condemned in the strongest terms! Proud son of the soil his death is a huge loss. Shujaat was an erudite intellectual a fearless journalist and above all a selfless human deeply concerned for his people…,” tweeted Farooq.

Deeply saddened and shocked by the tragic news of Shujaat Bukharis killing! Such inhumanity is unpardonable and condemned in the strongest terms!Proud son of the soil his death is a huge loss.Shujaat was an erudite intellectual a fearless journalist and above all a selfless …

The killing has sent shockwaves across the journalistic fraternity. In a statement, the Kashmir Editors Guild (KEG), while strongly condemning the killing, termed it “yet another shameful attack on the media in Kashmir that has been surviving with such attacks since 1989.”

“The killing is a great loss to the media fraternity in the state. Media in Kashmir has been operating in a testing situation in Kashmir for all these decades of crisis. The intermittent killings and attacks have been adding to the crisis in which the media was barely surviving,” said the KEG.