The Meghalaya high court has issued a show cause notice to the English daily.

A page from the 1945-established newspaper The Shillong Times.

New Delhi: The Meghalaya high court has issued a show cause notice to The Shillong Times, the state’s highest-circulated English daily, questioning why contempt proceedings should not be initiated against it for publishing a report about a court order seeking better amenities for retired judges and their families.

Titled ‘When judges judge for themselves’, the report, published on December 10, compared a recent order delivered by Justice S.R. Sen seeking several facilities for retired chief justice, judges and their spouses and children with an order passed by former chief justice of the high court, Uma Nath Singh and former Justice T.N.K. Singh seeking certain facilities before their retirement. Justice Sen is to retire in March 2019.

According to a December 6 report published in The Shillong Times, the order was issued by a single-bench led by Justice Sen, hearing a petition of the Register General in relation to a notification issued by the state government in October amending Rule 10 (a) of the Meghalaya State Guest Rule, 1991. As per the order, medical facilities were to be provided not only to the retired judges but also to their spouses and children. 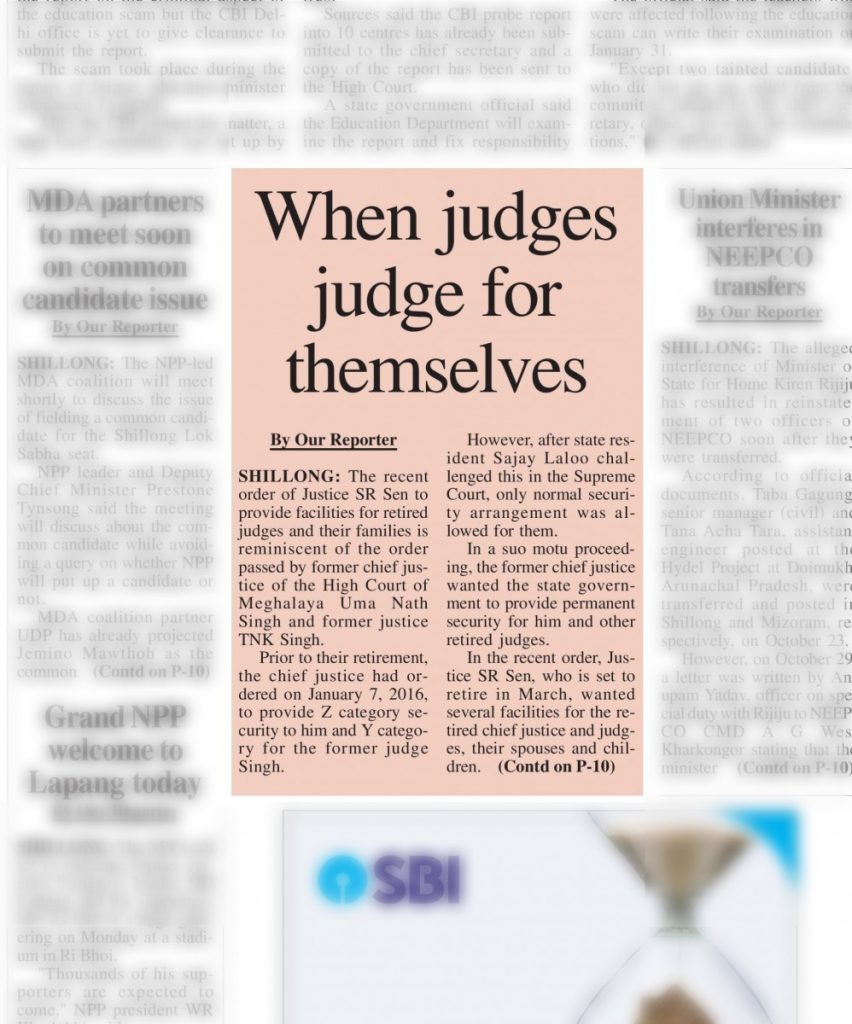 In February, the court also passed a resolution for enhancement of domestic help for retired judges but the state government had sent it back for reconsideration. Justice Sen’s order said, “I am not pressing right now for enhancement of domestic help and it is left with the discretion of the government. However, domestic allowances as per the resolution, the government should also include spouse/children of the retired judges.”

The February resolution also fixed reimbursement of phone bills of retired chief justices, retired judges of the high court at Rs 10,000 per month. Justice Sen’s December 6 order said, “In that regard, the government (is) to issue a notification with immediate effect. That means retired chief justice and judges will be entitled for Rs 10,000 only per month for mobile bill, landline, internet bills, etc. as well as to fix mobile at the rate of Rs.80,000 only for the judges.” It said the order was to be complied within a week. Else, “the court will be compelled to take suo moto contempt against the officers.”

Calling the order “reminiscent” of the order passed by former chief justice of the high court Uma Nath Singh and former Justice T.N.K. Singh, the December 10 report of the newspaper said, “Prior to their retirement, the chief justice had ordered on January 7, 2016, to provide Z category security to him and Y category for the former judge Singh.” It stated that the Supreme Court, however, overturned that decision in response to a petition by one Sajay Laloo challenging the January 7 order.

On December 13, the newspaper’s editor Patricia Mukhim and its publisher Shoba Chaudhuri were asked to appear in person before Justice Sen. A reporter present at the court related to The Wire that Mukhim was asked about her educational qualifications. “On being told that she is BA (Hons) and B.Ed, the judge in the open court said, ‘you are not fit to be a journalist, not qualified.’ She was also asked who appointed her. On being told that the newspaper’s management did, the judge retorted, ‘The management should also be put in jail.’”

Though both Mukhim and Chaudhuri apologised to Justice Sen for publishing the report, the duo was asked to appear before the Chief Justice Mohammad Yaqoob Mir on December 17. On being contacted, Mukhim refused to comment.

Justice Sen was recently in the news for stating in a judgement that India should have declared itself a Hindu nation at the time of Partition. Supporting the Centre’s stand on the Citizenship (Amendment) Bill, 2016, he said, “I make it clear that nobody should try to make India as another Islamic country, otherwise it will be a doom’s day for India and the world. I am confident that only this government under PM Narendra Modi will understand the gravity, and will do the needful as requested above and out (West Bengal) chief minister Mamata Banerjee will support the national interest in all respect.”

Reacting to Justice Sen’s comment, the Hynniewtrep National Liberation Council issued a statement in Shillong on December 13 stating that it hurt the sentiments of the people of the entire Northeast. “Our state cannot afford to have such a religious fanatic judge in the judiciary. He should immediately step down from his post. The entire Northeast pressure groups should demand his removal from the judiciary,” the HNLC statement said.