#RightSideUp: Pomp and Pageantry on Modi's Birthday; 'One Nation, One Language'

BJP supporters along with child priests perform 'abhishek' of a photo of Prime Minister Narendra Modi on his birthday at Sant Pashupatinath Ved School in Patna on September 17, 2019. Photo: PTI

New Delhi: Prime Minister Narendra Modi’s birthday was celebrated with much aplomb, replete with the annual photograph with his mother and a visit to the Narmada river even as anchors on ABP News suggested that his birthday be marked as ‘Narendra Modi Utsav’.

A fresher version of the NaMo app was also unveiled to mark the prime minister’s birthday, particularly to cater to increased traffic by way of birthday wishes.

On Tuesday, as he walked through the gardens and released butterflies, the dam, for the the first time ever, reached its highest mark at 138.68 metres – at the insistence of the Gujarat government to kick-off the Namami Narmade festival, as well as to likely mark our dear leader’s birthday.

But with water levels this high, it is locals who have had to face the brunt of the government’s gusto.

With the dam being pushed to capacity, the risk of floods has gone up for over 175 villages exponentially – many in the state’s Bharuch district. Last week, 3,900 people were evacuated from 23 villages, PTI reported. Locals have also complained of hearing ‘blast-like’ sounds and feeling the earth shake from time to time.

To commemorate Modi’s birthday, Rashtriya Swayamsevak Sangh mouthpiece Organiser published an article by Prakash Javadekar, the minister of environment, forest and climate change and information and broadcasting, which heaps praises on Modi and for his “level 5 leadership par excellence”.

In the birthday note to the prime minister, Javadekar writes:

His honesty and integrity is full and final. For him, national interest is the only interest. This image got widespread acceptability during his stint of 12 years as Gujarat chief minister. This stood out different on the backdrop of policy paralysis, corruption and vacuum of leadership which country experienced during 2004-14. Therefore, people love him… His humane face was visible when he consoled ISRO scientists after last minute snag in Chandrayaan 2.” 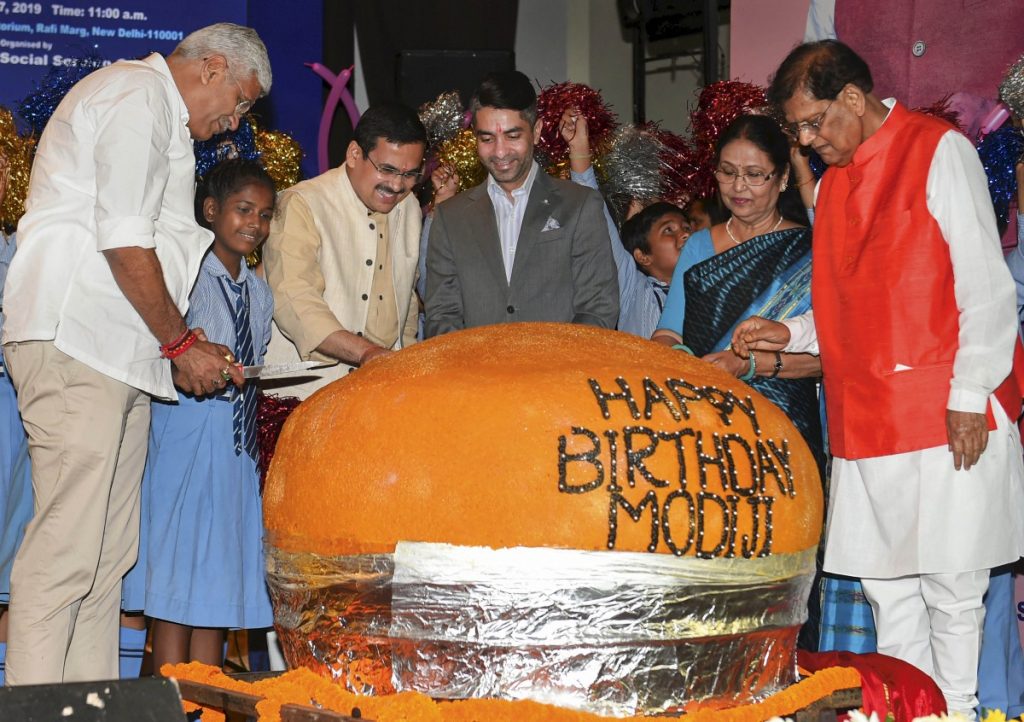 Recounting how Modi bowed before the steps of parliament and then the constitution in 2014, Javadekar lists Modi’s many feats, including being the “first Indian politician to realise the potential of social media and used it effectively”.

GST is a living example of his faith in co-operative federalism. Decisions about every word of GST law, rules and rates were decided unanimously though there is a provision of decision by voting. Increase in devolution to the states from 32% of central resources to nearly 49.5% is shows his faith in federalism.

He has declared new goals for his second term. 5 trillion dollar economy, Assured water supply to every household, providing social security to all needy sections and above all ‘sabka vishwas’.”

Javadekar ends by wishing Modi and with the hope that he “continues to guide us to serve our nation better”.

Home minister Amit Shah’s re-introduction of the agenda to champion Hindi as the ‘one’ language of India has been met with much opposition – after all, the country, with its diverse population, is a mixing pot of many languages and cultures.

The southern states particularly, as expected, have been the loudest in voicing their opposition to this exercise in unbridled homogenisation. On Twitter, many have taken to making jokes about how a large chunk of the non-Hindi speaking population would complete muck up the ‘one language’ situation.

Our family favourite – my uncle was visiting us and had enjoyed the hospitality of one of our neighbours the previous evening. Next day when he met the neighbour, he said, “Aap hamare ghar aana, hum aapko khayega.”

My wife’s Hindi is good enough to just get by.

One night, at the dinner table, she wanted to tell my mother “Please eat, don’t hesitate.”

She said in Hindi, “Khaao, sharam to hai nahi.”

Editorial director of Swarajya magazine R. Jagannathan, in an article, wrote on on how Hindi is “anyway winning the war”, and how “the big threat to other languages is not Hindi, but technology”.

Jagannathan says the “expected pushback against his views came from the non-Hindi-speaking states, even though it was obvious that few of them had any clue on how to make their own languages more understood around India”.

Pointing to how 44% of Indians know Hindi, he explains how by 2050, “some form of non-chaste Hindi will indeed be our de facto national language”.

“Hindi-state demographics (higher birth rates than the rest of the country) and outward migrations to non-Hindi-speaking states making them the most dominant group all over India.”

Jagannathan describes how he saw some posters in Hindi in Chennai before the last assembly polls in Tamil Nadu and how in Bengaluru, many auto and taxi drivers are forced to learn a bit of Hindi to communicate with commuters from outside the state.

“Add some incentives for learning the language, and Hindi will be right where Shah wants it to be in a couple of decades.”

As for technology being Hindi’s greatest enemy, he says that the use of Google Translate will “make it unnecessary for anyone to learn a second language at all – except for the love of it”.

“The ability to understand anyone in everyday situations will allow millions of Indians to work and earn a living anywhere – even if they do not know a single word in the language of the state they are migrating to.”

The Frustrated Indian, known till last month as rightlog.in, published an article this week on how the time is ripe for the RSS to “counter decades of propaganda against it”.

Written by the news desk, it notes how the organisation has been “the biggest victim of extensive left-liberal propaganda” for decades.

“Those who have given the organisation a highly negative image, are either RSS haters or simply don’t know anything about its ideology and still try to make a judgment about it.”

According to the article, RSS chief Mohan Bhagwat is scheduled to meet members of the foreign press sometime in September, and that invitations have been sent to media outlets from 70 countries – excluding Pakistan. A Sangh source the Frustrated Indian spoke to said:

“The main purpose of this meeting is to clear misconceptions about the Sangh and its ideology… it will be an off-camera briefing by Bhagwat and will not be for reporting.”

The article then tries to busting the several “myths” the liberal media has supposedly spread about the RSS, namely the organisation’s hand in Gandhi’s murder and how it is “Islamophobic”.

“Those making such bizarre allegations probably don’t understand that RSS is one of the most inclusive organisations. Its Indianness and nationalistic spirit are beyond any doubt.”

“RSS has also been labelled a casteist, pro-Brahminical organisation. This allegation is also a mere figment of imagination coming from those who don’t understand that every single member of the RSS is treated equally, irrespective of caste or other social divisions.”

Thus, the news desk says, the RSS has been forced to take a step to “dispel decades of fake propaganda against it”.