Even as Dr Anish Singhal showed the reporter his ID card, the reporter described it as 'fake'. Doctors are required to continue working even during the lockdown. 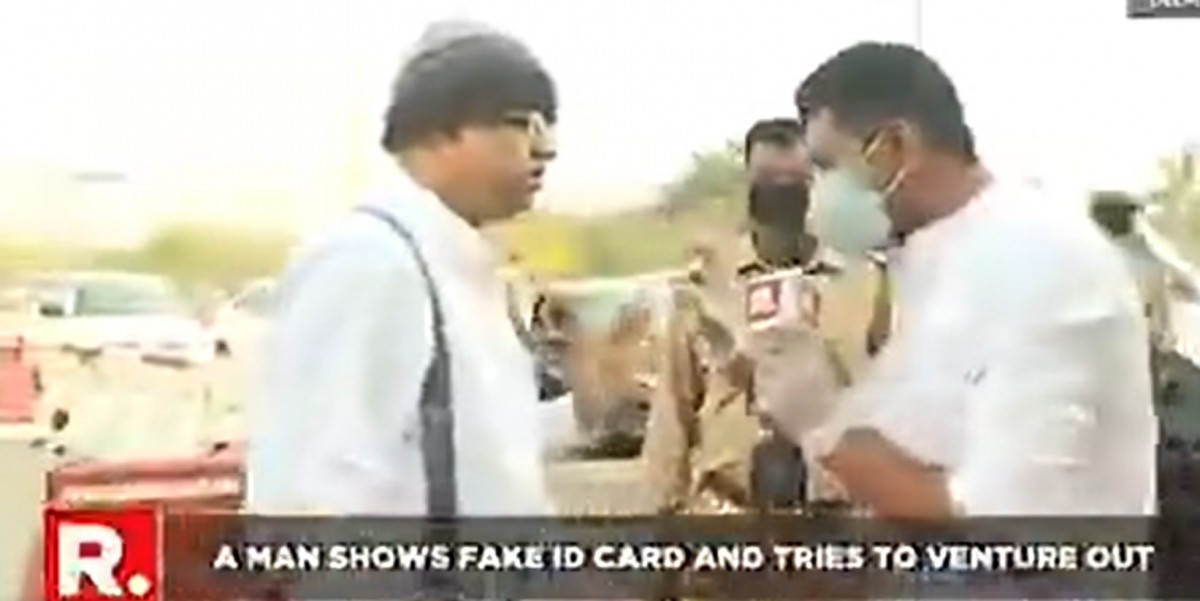 New Delhi: In a case of media vigilantism, a reporter from news channel Republic TV was spotted live on March 24 standing by a team of policemen at the DND flyover which connects Delhi to Noida in Uttar Pradesh, heckling a doctor on his way to work for ‘violating the lockdown’.

When the senior doctor, Anish Singhal, who is the director and medical superintendent of the Employees State Insurance Corporation (ESIC) Hospital in Noida, showed the reporter his identity card, the reporter termed it ‘fake’. In fact, the channel ran a banner which said, “A man shows fake ID card and tries to venture out”. The reporter even takes the doctor’s ID card and flashes it on to the TV screens, calling it “fake”.

ESIC, a statutory body under the Central Ministry of Labour and Employment, offers medical services to around 3.5 crore workers, primarily from the lower strata of the society.

Here is the video pic.twitter.com/o5SLa0LEDA

The ESIC Hospital later issued a press release about the incident, saying, “It is clarified that Dr. Singhal is director and medical superintendent of the 300 bedded ESIC Hospital, Noida (sector 24) where many patients are admitted which include critical one(s). When (the) news clip was shot, Dr. Singhal was trying to convince the police personnel to allow him to enter through checkpoint, when the reporter interrupted and started arguing (with the doctor).”

To contain the spread of the coronavirus, the Delhi administration has imposed a lockdown and has closed its borders with neighbouring states. Only those persons engaged in essential services, and vehicles transporting them, are allowed to ply or cross the borders.

The ESIC press statement further said, “In these testing times, when the entire country is committed to fight this pandemic, medical and para-medical fraternities are the real warriors and they are working beyond their call of duty to save lives from the catastrophic effects of Covid-19.”

“Though the role of media can’t be undermined, ESIC requests their cooperation and forbearance in this testing time to ensure that the personnel working in emergency services are not interrupted or inconvenienced in the performance of their duties.”

The incident attracted a lot of criticism on social media platforms. Union labour minister Santosh Gangwar too retweeted the ESIC press note on the incident.

Republic TV has so far not responded to its reporter’s conduct and or has not apologised for misreporting Dr Singhal’s ID card as ‘fake’.