Republic Bharat reported that according to its ‘sources’, Gandhi had left a Mathura rally venue without listening to an alleged rape survivor’s pleas.

Congress general secretary Priyanka Gandhi’s speech during the kisan panchayat in Mathura was interrupted over an alleged rape case in Rajasthan where Congress is in power. A minor girl’s parents alleged their daughter was gang-raped in Bharatpur bordering Uttar Pradesh. They were accompanied by a group of demonstrators chanting ‘beti ko nyay do’ (give justice to our daughter). The alleged rape victim and her family claimed that their efforts to demand justice for the past one-and-a-half years have been futile and they were also being threatened by the perpetrators’ family.

It is noteworthy that one of the men seen protesting in the video is the one who had threatened Bhim Army chief Chandrashekhar Azad after the alleged gang-rape and murder of a Dalit woman in Hathras. The upper-caste man, along with others, was defending the accused.

Republic Bharat reported that according to its ‘sources’, the police arrested the protesters and Priyanka Gandhi left the venue without listening to the alleged rape survivor’s pleas. 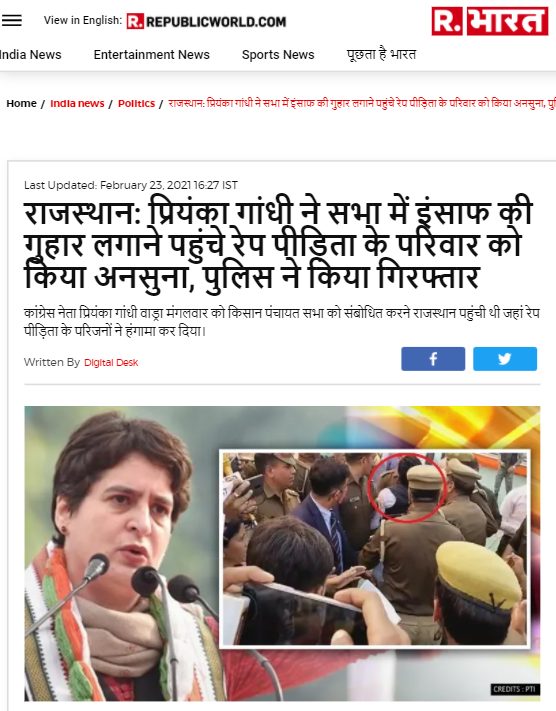 The channel had also tweeted the report. Both are now deleted. Several media outlets reported that Priyanka Gandhi stopped her speech mid-way and got down from the stage to listen to the grievances of the protestors.

#WATCH | A group of people raised slogans during Congress leader Priyanka Gandhi Vadra’s address at a farmers’ rally in Mathura, seeking her intervention in a rape case in Bharatpur, Rajasthan. She got down from the stage & listened to the grievances of the demonstrators. pic.twitter.com/FTfVlC8kUZ

NDTV journalist Saurabh Shukla quote-tweeted Republic and wrote, “This report is incorrect. This is what happened: Priyanka Gandhi got down from the stage, took the rape survivor with her, listened to her and called Rajasthan CM Ashok Gehlot.”

BREAKING: The girl from Rajasthan who reached out to Priyanka Gandhi seeking justice was given immediate attention by her.

She stopped her speech midway to meet her, took her away, dialled CM Ashok Gehlot and directed him to ensure speedy justice for her. Gehlot assured of it. pic.twitter.com/cntntncFx5

UP Congress also tweeted that Gandhi spoke with the alleged rape survivor and subsequently dialled Ashok Gehlot. The party also said that the minor girl wasn’t arrested by Mathura police.

Soon after, Republic Bharat took down its article and one of its tweets. Another tweet carrying the misinformation is still live on its Twitter account. However, the link to the article redirects to Republic Bharat’s homepage.

The channel then wrote another piece that read, “Priyanka Gandhi met the family of the rape survivor who plead for justice, Gandhi spoke to the CM and asked him to take action.”

The title and content of its report were changed without acknowledging the earlier false reporting.