The news outlets recently published reports based on an article by an unknown website claiming author-activist Peter Friedrich is close to “TRT journalist Baba Umar who is believed to be working for Pakistan’s ISI”. 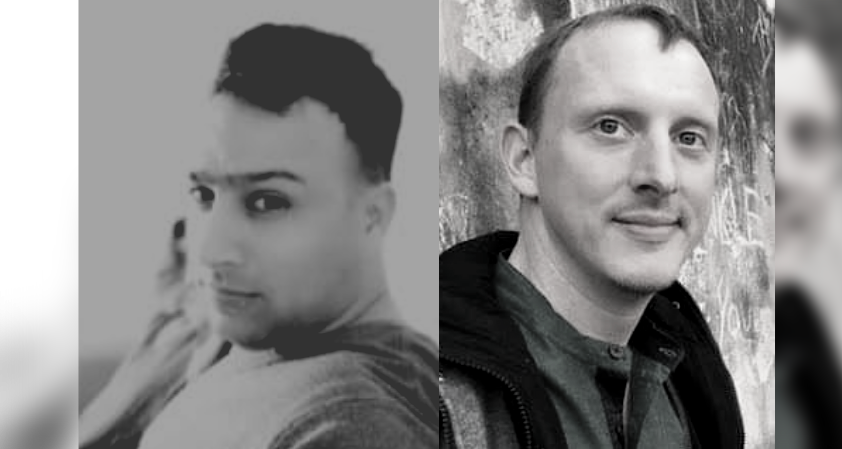 News outlets Zee News and IANS recently published reports based on an article by an unknown website ‘Greek City Times’ claiming author-activist Pieter Friedrich, whom the Indian government is pursuing in the farmers’ protest toolkit case, is close to “TRT journalist Baba Umar who is believed to be working for Pakistan’s ISI”.

“Both of them [Friedrich and Umar] have been following each other and promoting each other’s content as well. Besides, Pieter Friedrich had done several interactions/productions with Baba Umar in the past. In one of the videos that he produced with Baba Umar, and is allegedly sponsored by Pakistan, he attacked India by taking a pro-Pakistani line on Kashmir,” Zee News and IANS quoted from ‘Greek City Times’.

Zee News also provided a screenshot of the interview, however, it is noteworthy that the person has been identified as ‘Umar Baba’ in Peter Friedrich’s tweet. 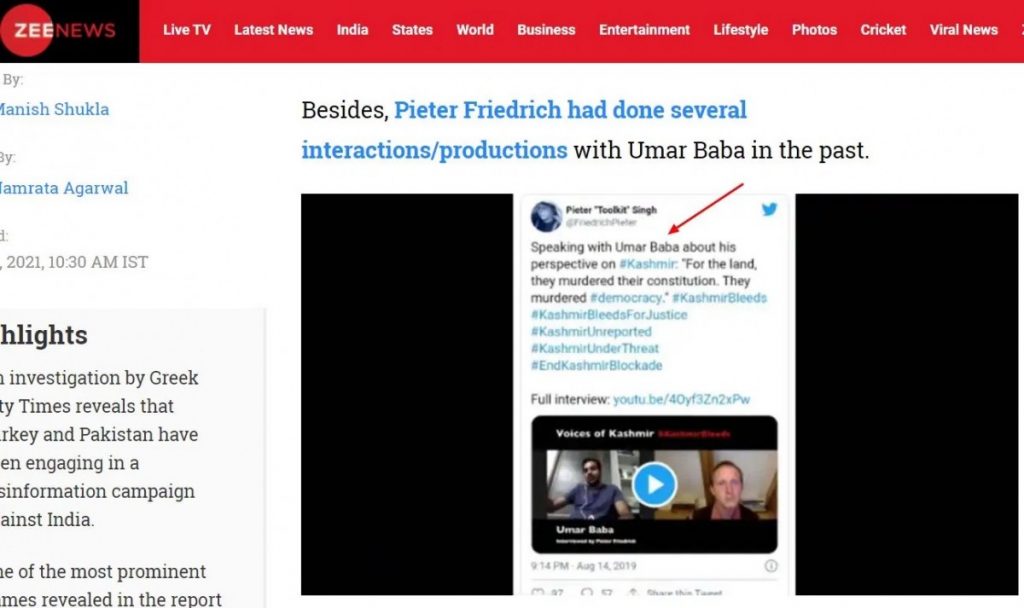 The interview that ‘Greek City Times’ referred to was taken in April 2019. Peter Friedrich spoke about Kashmir with ‘Umar Baba’, not TRT journalist Baba Umar.

Umar introduced himself as a Kashmiri pursuing a research project in South Korea. The full interview on Youtube can be watched here.

Journalist Baba Umar addressed the misinformation in a tweet thread where he wrote, “Wide circulation enjoyed by Zee News, IANS to these false claims have caused severe anguish to me and I’ve to live with the repercussions of an unbelievable amount of abuse and hate towards me and my family.”

I deny having ever interviewed by @FriedrichPieter as claimed by @greekcitytimes in its baseless article, amplified by @ZeeNewsEnglish @ians_india through their dishonest journalism.

Pieter talked to Umar Baba, a scientist/ different person, NOT ME.

This is the level of stupidity of allegations leveled against me & the quality of research. They assail me for having ties to @BabaUmarr, a @trtworld journalist, because I interviewed a Kashmiri named Baba Umar. A different Baba. Good going. 🙄https://t.co/BrWpN0alvY

Origin of the misinformation

A new website ‘Disinfo Lab’ (not to be confused with EU Disinfo Lab) that claims to unveil “fake news and propaganda”, especially in Asia, published a report titled THE UN-ENDING WAR: From Proxy War to Info-War against India on February 15, 2021.

The #toolkit dropped by @GretaThunberg had many key players but the name of the foreign expert Pieter Friedrich was dramatic as he was the part of a true story we were working(About group which tried every possible way to unsettle India)#UnendingWar(1/17)https://t.co/4KixWXZkS1

The report makes elaborate claims about author-activist Peter Friedrich, whose name was featured in the toolkit supporting farmers’ protest. The Delhi police have placed Friedrich at the centre of a ‘Khalistan’ conspiracy against India in the guise of the farmers’ protest. DCP of Special Cell said that Indian agencies have been on the lookout for Friedrich, who is alleged to be close to Bhajan Singh Bhinder. Friedrich denied involvement in any ‘separatist plot’ designed through the toolkit and said, “[The] Khalistan movement today — with which I have absolutely zero involvement — appears to me to be entirely propped up by the [Narendra] Modi regime for purposes of creating a Frankenstein monster on which it can blame all ills”, reported Firstpost.

Bhajan Singh Bhinder is a US-based Sikh activist who is well-acquainted with Friedrich. The Delhi police have claimed that Bhinder is a leading proponent of the “K2 [Kashmir and Khalistan] desk” of the Pakistan ISI. The police alleged that Friedrich has been on the Indian government’s radar since 2006 due to his closeness to Bhinder. The Sikh activist said that K2 is a creation of the Indian government and the media.

The report by Disinfo Lab alleges that Friedrich was recruited by Bhinder in 2006-07 to help his “info-war” against India. It also claims that a number of institutions and organisations were set up in the US to provide credibility to Freidrich and promote the “Khalistani” agenda. None of this information could be verified by Alt News, and the claims have not yet been backed with evidence available in the public domain.

Disinfo Lab then goes on to show how Freidrich has managed to build a prominent follower base on Twitter. Among the many verified names that follow Friedrich is ‘Baba Umar’.

A website named ‘Greek City Times’ published a follow-up report on Disinfo Lab’s investigation. “Another prominent name that emerged was TRT journalist Baba Umar, who is believed to be working for the ISI. Both of them [Friedrich and Umar] have been following each other and promoting each other’s content as well. Besides, Pieter Fredrich had done several interactions/productions with Baba Umar in the past. In one of the videos that he produced with Baba Umar, and is allegedly sponsored by Pakistan, he attacked India by taking a pro-Pakistani line on Kashmir,” wrote Greek City Times. This was republished by Zee News and IANS.

The media outlets amplified unverified news published by an unknown website. The ‘news’ turned out to be false. Both outlets are yet to apologise and clarify for the false reporting despite journalist Baba Umar clarifying that his name has been unnecessarily dragged into the toolkit controversy by a dubious website.