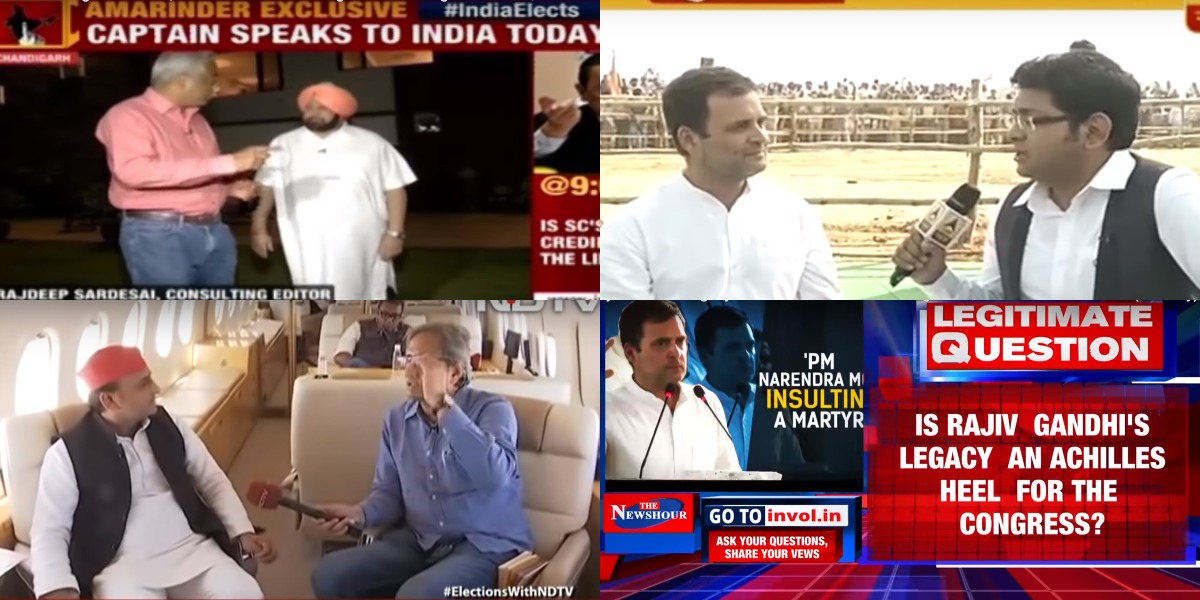 New Delhi: The Congress told the Supreme Court that Prime Minister Narendra Modi’s remarks against former PM Rajiv Gandhi – calling him “Bhrashtachari No. 1” – were “obscene” and “derogatory” to the post he held. A day earlier, it had lodged a complaint with the Election Commission (EC) about Modi’s remarks.

The Supreme Court rejected a review plea filed by 21 opposition leaders seeking a direction to increase VVPAT verification from five EVMs per booth to at least 50%. The opposition leaders said they would urge the EC again to review its vote counting guidelines.

A group of lawyers and women activists protest at the Supreme Court against the procedure adopted by the three-judge panel that gave a clean chit to Chief Justice Ranjan Gogoi in a case of alleged sexual harassment case. The complainant has asked for a copy of the in-house committee’s report.

In “Left, Right and Centre”, the channel discussed Modi’s remarks. Anchor Nidhi Razdan said, “Rajiv Gandhi was a PM who was killed in a terrorist attack – it was totally unnecessary for Modi to speak about him.” She also said the level of discourse has “fallen”, with Rahul Gandhi commenting that the Congress party has “dismantled Prime Minister Modi”.

Swaraj Abhiyan leader Yogendra Yadav said, “The question is if this a way of dodging and distracting from the issues? Why has a PM who died 30 years ago become an issue?”

Vivek Reddy of the BJP responded that his party has not been speaking about emotive issues alone. “BJP has put all its cards before the people. When you say I belong to certain dynasty, you should be prepared to be questioned. Bofors was such a big betrayal of the people. Congress wanted the red corner notice on middleman Quattrocchi withdrawn and allowed withdrawal of slush money by him.”

When Razdan pointed out that the former PM was let off by a court when the BJP was in power, on the ground that there was no evidence against him. Reddy countered that “it was not an exoneration which was complete. Quattrocchi was not brought to India to face trial”.

Pawan Khera of the Congress claimed “when Modi tried to re-open Bofors, the Supreme Court threw it out”. He asked why Modi is speaking about the Bofors case and not demonetisaiton, agrarian distress or unemployment.

To Razdan’s question on whether the legacy of Rajiv Gandhi can be questioned, Yadav said: “Everyone can be questioned, provided it is relevant to the debate and is done in a decent way. But you don’t have to speak in such vulgar language.”

With #FightOverRajivDare, and headlines such as “Rahul calls Rajiv martyr” and “Rajiv legacy Cong Achilles’ heel” on the screen, anchor Navika Kumar asked: “Question is if Rajiv was a martyr or not”.

G.V.L. Narasimha of the BJP said, “Why should Rajiv’s legacy not be questioned? Rahul has inherited that mantle from his father – it is a ‘parivar’ (family) party. The entire family is steeped in corruption.”

He said, “Rajiv’s performance needs to be looked at in the context of 1984 anti-Sikh pogrom, 1984 Bhopal gas tragedy, Shah Bano betrayal and 1987 Bofors scandal. Do you think people who question that he was a martyr are unjustified?”

Political analyst Sumanth C. Raman said, “Rajiv was martyred by a foreign terrorist. Likewise, Indira Gandhi also laid down her life for the nation. You can have a problem with their political legacy, but you can’t question if they were martyrs – they died due to political reasons. What else did they lay down their lives for?”

On “Election Trail”, anchor Rajdeep Sardesai spoke to Punjab chief minister Amarinder Singh. An RTI filed by India Today revealed that just one “surgical strike” was conducted during the UPA regime, as against the Congress’s recent claim that six were conducted.

He asked Singh about the issue. “We did not call them surgical strikes. We called them cross-border raids. One General Jain had recalled how his column went 7 km into Pakistan,” a combative Singh said.

He criticised Modi for taking credit of the surgical and airstrikes. “It is our services and forces who have done this,” the Punjab CM said.

When pressed on the Congress questioning the success of the Balakot airstrike, Singh said, “Proof is something which is part of gathering of information in military. Our missiles have cameras – if we have hit, the government should show it. Why don’t they?”

The channel picked on Congress leader Shashi Tharoor’s tweet in which he said Pakistan PM Imran Khan “reads and cares” about the history of the Indian subcontinent.

With #CongForImran and headlines like “Open alliance, open praise for Pak”, the channel criticised Congress for the statement.

Major General (retired) G.D. Bakshi said in the last 30 years, 80,000 Indians have lost their lives due to terrorism sponsored by Pakistan. “They are lauding it [Pakistan]. What is the reason for this love fest?” he asked.

BJP leader Gaurav Bhatia too questioned “why do we need to have endorsement from Imran for everything”.

Anchor Arnab Goswami quipped, “I did not know Imran had a fan club in India.”

As his panelists created a din by shouting over each other, he was heard telling one person, “You will not get half a word in unless you raise your voice.”

Akhilesh accused the media of not giving adequate space to opposition parties. “They also twist what we say,” he said, adding that people now do not believe everything they see on media.

On the EC’s “clean chits” to Modi, Yadav said, “The question is who appoints them? It is the government. In our case, so many workers have been issued red cards. Police was stationed at their homes, they were told they cannot step out and campaign.”

He added, “When we complained, the EC sought a report from the DM, who is from the government. So how do we get justice?”

He also criticised the use of “foul language” during the campaign, saying “the worst is being used by the BJP”. As for Modi, he accused him of being “the first 180 degree PM – he does the exact opposition of what he says.”

In his primetime show, Sudhir Chaudhary said many regional party leaders like Sharad Pawar, Y.S. Jaganmohan Reddy and Mamata Banerjee, who were earlier part of the Congress, had to move away from it. “Because the Congress never cared for regional sentiments and their leaders, they formed their own parties,” he said.

He said because of the regional parties, the Congress has been dislodged from states like West Bengal, Odisha, Uttar Pradesh and Bihar. H wondered if these regional parties would now ally with the grand old party.

During #RahulonABP interview, the Congress president said his party has a ‘national alliance’ with parties in Maharashtra, Bihar, Jharkhand and Jammu and Kashmir. He insisted, “In West Bengal a secular party will come and in UP a secular formation will win.” He said, “We have closed the BJP’s door everywhere.”

Refusing to be drawn into the question of who will be the next PM, Gandhi said, “My aim till May 23 is to put in full energy to defeat the BJP, RSS and Narendra Modi. I will not get distracted. We have to save our institutions.”

Also Read: What Indian Healthcare Has Looked Like Under Five Years of the Modi Govt

On the BJP targeting him and his family, Gandhi said, “People can say things about me, I just listen and learn.” He denied that his family only sought power, saying no one from the Gandhi family has been the PM for the past 30 years. “Why is Modi still obsessed? Because he knows we fight an ideological battle, have a connect with the people, and love them.”

On allegations around his citizenship and business interests, Gandhi challenged the Modi government to investigate and put him behind bars. “I am not afraid. I am a truthful person,” he said.

The Congress president said the main issues of the election are farmer distress, unemployment and corruption.