Editorials published by English language newspapers said since journalists and constitutional authorities were potential targets of surveillance, the snooping could not have been necessitated by national security concerns. 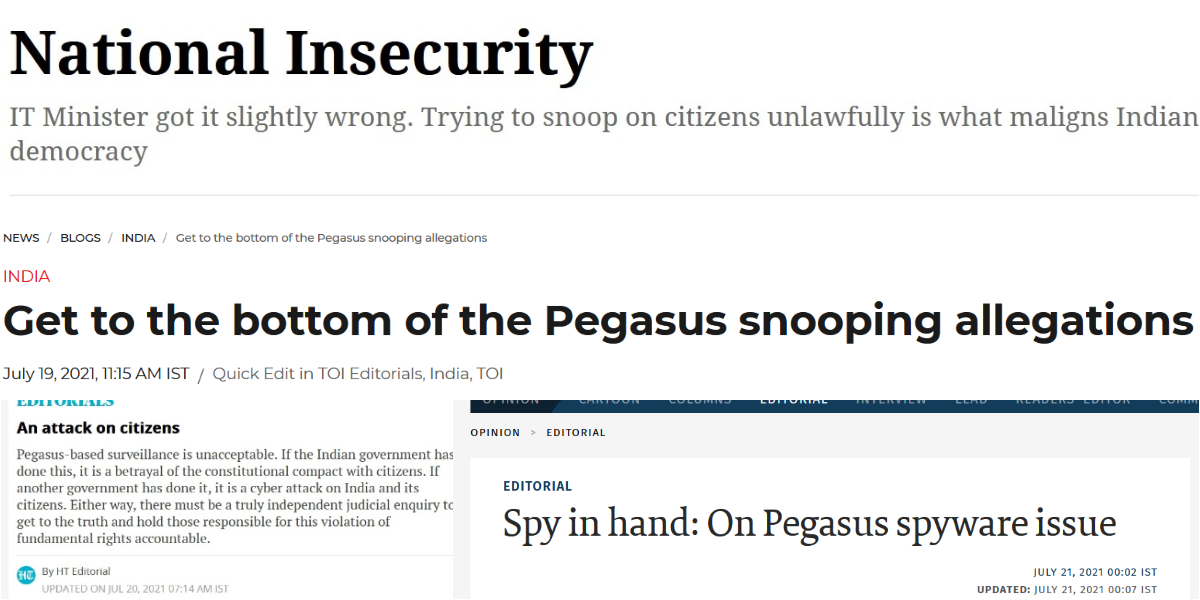 Screenshots of editorials by various English language newspapers on the allegations of snooping through Pegasus spyware.

New Delhi: After The Wire and 16 other media organisations uncovered a ‘snoop list’ that showed activists, politicians, journalists, judges and several others were targets of cyber-surveillance through the Israeli firm NSO Group’s Pegasus software, English language newspaper editorials said the reports raise concerning questions that need to be answered by the government.

Over the past two days, The Wire has published several reports that suggest that the software, which is only sold to governments, was being used to keep tabs on dissidents and journalists. This counters the NSO Group’s claim that the software is sold to fight terrorism and crime.

In an editorial published on Tuesday, Hindustan Times said that the allegations of “widespread surveillance”, if true, “represent an unacceptable and illegal invasion of the right to privacy, right to liberty, and the right to dignity of all those targeted”. The reports also throw up “deeply disturbing questions” about the source of the hack and represent a “subversion of India’s constitutional democracy”, the newspaper said.

Three current employees of the newspaper were on the ‘snoop list‘.

“The Government of India (GOI) has denied allegations of illegal surveillance, and claimed all interceptions are as per law and due process — though it does leave room open to ask if GOI has purchased Pegasus and deployed it,” the editorial says.

The newspaper said that the gravity of the allegations and their implications for Indian democracy are “enormous”.

“If the Indian government has done this, it is a betrayal of the constitutional compact with citizens. If another government has done it, it is a cyber attack on India and its citizens. Either way, there must be a truly independent judicial enquiry to get to the truth and hold those responsible for this violation of fundamental rights accountable,” HT said.

The Hindu, in an editorial published on Wednesday, said that there is strong evidence that Indian citizens were targets of “a vicious, abominable and uncivil surveillance campaign by a government entity, Indian or foreign”, adding that the revelations are extremely credible.

“The buck stops with the Government of India. Instead of coming clean and explaining what it intends to do to protect citizens, the GoI has fallen back on a disingenuous claim that no illegal surveillance is possible in India,” the editorial says.

The newspaper said that since potential targets included journalists, politicians, a constitutional authority and an election commissioner, among others, this “does not indicate that the surveillance was necessitated by national security or public safety concerns”.

“It is safe to assume that no information regarding terrorism or Chinese intrusion can be obtained by spying on a woman who complained of sexual harassment by a former CJI. On the contrary, the composition suggests that private craving, turpitude and even voyeurism motivated the perpetrators,” the newspaper says.

The Hindu said that it is “unsettling for a democracy” that state agencies can “trample upon the lives of citizens” in such a manner, even as elected representatives plead ignorance. “This is antithetical to the basic creed of democracy. The truth about these revelations must be unearthed through an investigation by a JPC [joint parliamentary committee] or by the Supreme Court or any other credible mechanism. A starting point for the Government must be in clearing the air on the foremost question it is skirting around — has any Indian agency bought Pegasus?” the editorial says.

In an editorial published on Wednesday, the Indian Express said that the allegations warrant a probe into the matter of snooping. “When the Israeli vendor insists that the spyware is sold only to ‘vetted governments’, the government does not have the option of brazening it out or resorting to conspiracy mongering,” the newspaper said, referring to information technology minister Ashwini Vaishnaw and home minister Amit Shah’s statements in the aftermath of the revelations.

It said Vaishnaw and the Union government must now “address the Pegasus in the room” and clarify if red lines between authorised interception and illegal surveillance have been breached by the government or its agencies “to target political opponents, dissidents and activists”.

The newspaper said that while earlier governments have also operated in “grey zones” of espionage, the nature of this “alleged scandal is different… because of the scale of the purported abuse of power and the political climate that forms its backdrop”.

The Indian Express said that the Supreme Court must take note of the allegations that the woman who accused then chief justice of India Ranjan Gogoi of sexual harassment in April 2019 was also a potential target of surveillance.

“The court must play its role in ensuring that the questions are answered, and due process is followed, no matter where it might lead to,” the newspaper said. 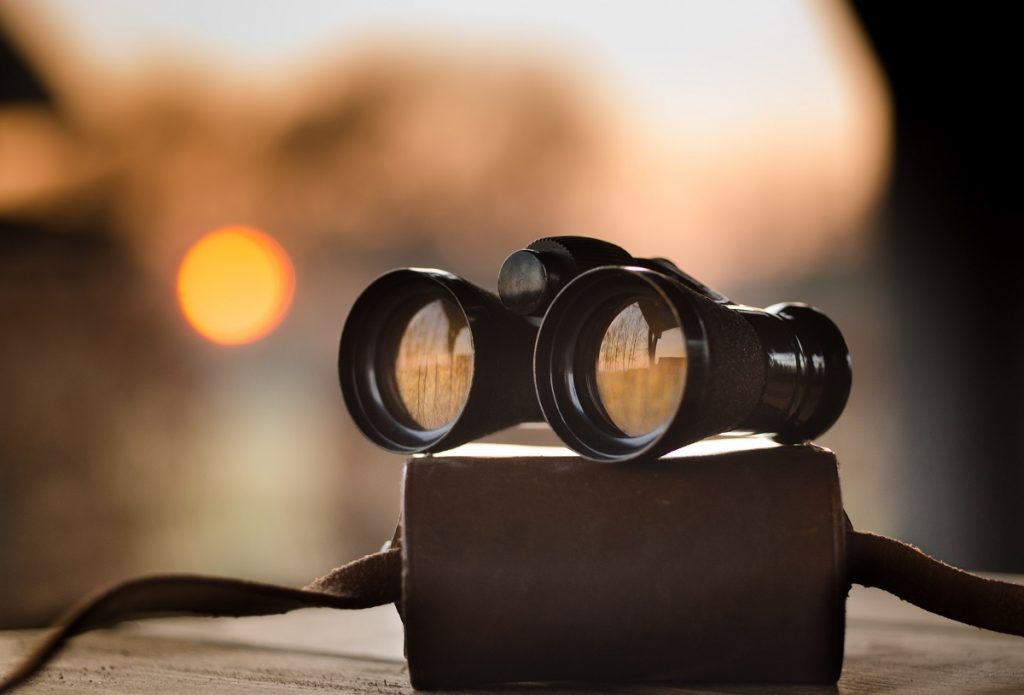 In a ‘quick edit’ published on Monday, the Times of India said that the fresh allegations of snooping raise “uncomfortable questions” despite its rejection of any involvement.  “The existence of companies like NSO Group, which claim legitimacy by working with governments, is just as worrying as rogue hackers attacking governments,” the editorial said.

The newspaper said that “rising international laxity in governmental regard for democratic proprieties” calls for a global audit of such companies and greater civil society activism.

“Domestically, India must revive discourse on judicial and legislative accountability when it comes to surveillance of its own citizens. The current bureaucratic safeguards must be reviewed. Democracy can wither from within. With more tools like Pegasus out there, it must be safeguarded even more strongly,” TOI said.

In an editorial, The Guardian, which is part of the consortium that has uncovered the allegations, said there is an “unregulated global industry” that provides military grade surveillance software.

“Is political dissent now a form of terror? Are activists’ thoughts crimes? For some regimes the answer is, unfortunately, yes,” the newspaper said. It notes that the number of a murdered Mexican journalist was selected by an NSO client and that it was used to target people who were close Saudi journalist Jamal Khashoggi, both before and after he was killed.

The editorial, discussing people targeted in India, says, “In India, the phone numbers of hundreds of opponents of the Hindu nationalist Modi government, including a senior Congress party leader, Rahul Gandhi, are in the leaked data. Mr Gandhi called it ‘an attack on the democratic foundations of our country’. He’s right.”

The Guardian said that the revelations show that there is scant mobile phone privacy and that a “society lacking the virtues of democracy, such as freedom of speech and association, risks a descent into tyranny”.

It also wondered if there should be a legal framework that allows victims of spyware to hold governments, or the complicit companies, accountable for “abuse and misuse”.

“What would not be prudent is to persevere with light-touch regulation that is ineffective at preventing violations of human rights by repressive regimes or at protecting individuals or companies from unlawful hacking,” the editorial concludes.