For Some More Than Others, Being a Journalist in India Comes at a High Price

"We're not being anti-establishment. We're just reporting what's happening, what has to be reported."

Representative image of journalists at a protest. Photo: Reuters/Amit Dave/File 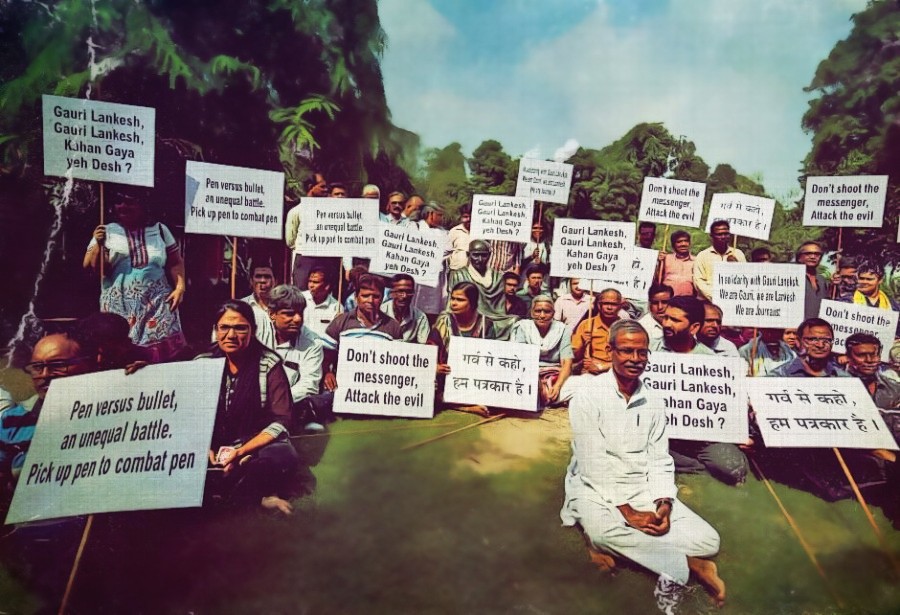 The killing of Gauri Lankesh has highlighted the shrinking space of free speech in India. Credit: Reuters

New Delhi: In July 2012, Tongam Rina was shot point blank in her stomach, right outside the office of Arunachal Times, where she is an associate editor. More than five years later, she still finds it difficult to talk about the attack, which she says undoubtedly occurred because of her work as a journalist. Luckily, Rina survived the shooting, unlike Gauri Lankesh who was assassinated in Bengaluru on the night of September 5.

With the death of the Kannada journalist-activist – who had come under attack for her views against the communal politics of the Sangh parivar in Karnataka – the number of media persons killed in targeted assassinations or violence in India with confirmed motives has climbed to 41. The toll, a Committee to Protect Journalists (CPJ) study has revealed, is just from the past 25 years.

“It’s clear that she [Lankesh] was targeted for what she was doing. She made so many people uncomfortable,” said Rina. “Not many people will want to know the truth or want to know what’s happening in the country or speak about it.”

The killing of Lankesh has not only highlighted the shrinking space for free speech but also the increasing threats that journalists in India face today. The pressure from state and non-state actors, the fear of litigation and the risk of physical attacks often dictate what makes the news – but more importantly, what doesn’t.

According to Rina, a majority of journalists in India are unwittingly succumbing to pressure. Only a handful like Lankesh, she says, are daring to question the actions and motives of the establishment. The biggest media outlets – which continue to wield great influence over the nation – are not among them. “The quality of journalism has shrunk so much that it’s difficult to find good reports,” she adds.

Journalists in the Northeast, says Rina, have problems “so different from other parts of the country”. Besides the pressure from the government in power, underground militant groups also often dictate the narrative of stories.

“They [journalists in the Northeast] work for small newspapers and small TV channels and they really don’t have the resources of big media houses, and they also face a lot of threats not only from the state but also from a lot of underground organisations and a lot of other agents.”

Though the influence of non-state actors is not too much in Arunachal, Rina says her colleagues in other parts of the Northeast face increasing threats from militant groups that work off the ground. “They have a say in what kind of reporting is done, in what we write and also what we leave out.”

Also read: Do Women Journalists Have it Harder in India?

Regional journalists in India – like Lankesh, who ran the Kannada weekly Gauri Lankesh Patrike – face an added layer of risk due to the absence of big media houses protecting them, according to Sudipto Mondal, an investigative journalist who reports on caste, communalism and corruption, and has worked for big newspapers like The Hindu and The Hindustan Times.

“As an English language journalist, I’ve always worked in a mainstream publication – which is the last frontier really for the right-wing,” Mondal says. “The day an English journalist or mainstream journalist is attacked is the day we can conclude that they have no restraint or fear anymore.”

Mondal himself has faced threats during his reporting in Mangalore, which he labelled as the “southern laboratory of the Sangh parivar,” and had to carry a toy gun with him to ward of any attackers.

According to the CPJ data, none of those killed in targeted assassinations since 1992 in India worked for English publications, with a majority working in smaller cities like Jhansi, Siwan and Shahjahanpur.

For the most part, according to Mondal, journalists in India are simply doing their job. Lankesh’s death, he says, is evidence that “a group of journalists is already doing a lot. It is unfair to say that they should do more.” A protester displays a placard during a protest rally against the killing of Gauri Lankesh in New Delhi, September 6, 2017. Credit: Reuters/Adnan Abidi

In the northeastern states, as is in other parts of the country today, it is becoming increasingly difficult to take an anti-establishment stand, with many journalists facing a backlash for doing so. CPJ data has revealed that of the 41 journalists who have been killed since 1992, 21 were covering politics, 17 were focused on corruption while ten were crime reporters.

Even as journalists in Guwahati joined the thousands across India condemning Lankesh’s brutal killing, Nava Thakuria, the secretary of Journalists’ Forum of Assam, pointed to the fact that the state has witnessed 32 murders of journalists in the past three decades – some by militant groups including the United Liberation Front of Asom, Thakuria told Indian Express.

“Most alarming is the fact that not a single culprit has been arrested in any of the cases, not to speak of conviction.”

Reiterating what Thakuria said about the lack of convictions in the cases of violence against journalists, Rina said that unfortunately, even in the case of Lankesh, “it’s going to be a long journey for people who care for her and who think that they deserve to know who killed her.”

And even if the investigations are able to reveal who the shooters were, it may never be known who the attack was actually orchestrated by.

When male journalists are critical of the regime in power, they are called corrupt. However, when women journalists do the same, apart from all the threats of physical attacks and intimidation, an army of online trolls is unleashed to malign them, according to investigative journalist Neha Dixit, who has been in the line of fire of such online abuse since 2013 when she covered the Muzaffarnagar rape cases.

“They [online trolls] put out my personal pictures, they put out pictures of my family. They send me pictures of their private parts and I regularly get rape threats,” says Dixit, adding that this has become her new normal.

The state intimidation, she believes, has made it increasingly difficult to find outlets willing to publish stories that are critical of particular political organisations and government bodies. Specifically, stories that are based on thoroughly investigated ground reports and that are not opinion pieces but have solid documentation and evidence to back the claims. “Those kinds of stories are becoming difficult to publish.”

In 2016, Dixit’s investigative series exposing how 31 tribal girls from five border districts of Assam were illegally taken to Punjab and Gujarat by three outfits affiliated to the Rashtriya Swayam Sevak (RSS) was published by Outlook. During the reporting, she says, apart from constant threats by the RSS when she was in Assam to speak to the parents of the girls abducted, Dixit also faced physical threats.

On one occasion where she made a trip to the ‘shishu mandir’ in Gujarat to meet 23 of the 31 girls who were being kept there and being given “Hinduvta lessons rather than any formal education,” she was locked inside the premises on orders from an influential trustee.

“The trustee grilled me and asked me all kinds of questions and they were just not letting me out, and eventually, after a lot of pleading he let me out,” says Dixit. The most frightening part of the whole incident, she says, was the obvious protection the organisation seemed to enjoy when they dared her to contact the police.

“When we [journalists] are moving in territories where all these organisations that are involved in wrongdoing enjoy some kind of impunity from law and order and the police, then it becomes a major cause of concern.”