While more than 150 have been injured in the riots, most reporters on the ground have gruesome stories of intimidation and attacks to recount. 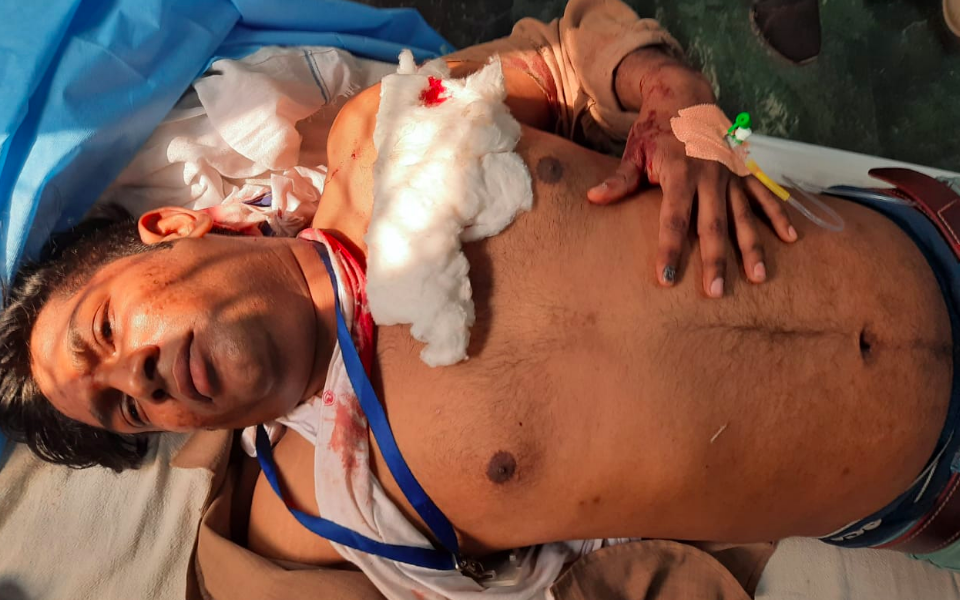 Journalist Akash Napa, after he was shot at. Photo: Twitter/@sarkarshanta

New Delhi: In the three days through which the violence in Delhi’s north east have escalated into what is now being understood as communally targeted attacks on anti-Citizenship Amendment Act protesters, journalists have been among those injured – some quite seriously.

The total toll rose to 10 on Tuesday evening, with more than 150 people injured.

On Tuesday, Akash, a correspondent for JK 24×7 News, was shot at in east Delhi’s Maujpur.

A journalist has been shot at while covering #DelhiRiots

He was reporting for JK24 from Maujpur in Delhi and has been admitted to GTB hospital.

This is getting way out of hand.

Meanwhile, four of NDTV’s reporters and camerapersons were assaulted by what the news channel described as “armed mobs.”

Reporter Arvind Gunasekar lost three teeth in a barrage of blows and was reportedly about to be hit by a stick when cameraperson Saurabh Shukla intervened and ended up taking the blow instead. Gunasekar and Shukla had spent the day covering parts of north east Delhi that have been seeing the most violence, reporting from within vehicles at times when the clashes escalated.

Reporter Mariyam Alavi and cameraperson Sushil Rathee too were injured after having been attacked by a mob in a different part of north east Delhi.

Tuesday’s edition of Times of India carried a firsthand account by photojournalist Anindya Chattopadhyay, who was asked to prove by raging mobs if he was a Hindu at Maujpur.

Scroll.in reported that its correspondents “saw supporters of the law threatening journalists and checking their phones for videos and deleting them.”

Meanwhile, messages have also poured in from reporters on the field and their colleagues off it, on the necessity of staying safe.

Horrific reports of mobs turning on reporters, attacking them. Pls be safe, all crews that are out there, risking so much to do their jobs.

This is a riot! Protesters from both sides heckling & thrashing media persons. I was told “Camera band karle warna gaad denge yahin pe”. All this while 10 men were holding me tightly from my waist & shoulders. Have never felt so scared! Camera person was pushed badly with lathis

The walk from Jaffrabad to Maujpur wasn’t one bit easy. We were heckled and abused.

Men with sticks are roaming around. Shops have been burnt. A mention of ‘media’ is enough to get you attacked.

Despite all this, journalists are there. And they are doing their job. pic.twitter.com/fE15yrJy6f

Journalist Akash has been shot at #Maujpur, kardampuri area.
Two NDTV journalists have been brutally beaten @arvindgunasekar @Saurabh_Unmute
Cops being shot. Journalists being asked religion. Civilians caught in crossfire. Is this the New India? #DelhiRiots #DelhiViolence

“We have little doubt the attackers actively sought to prevent videography or photography that may lead to them being identified. A lethargic police and politicians instigating communal violence cannot escape blame for attacks on the media,” the organisations wrote in a strongly worded statement.

The Editors’ Guild too released a statement on Tuesday night, calling the attacks a “direct assault on press freedom”.

The Editors Guild of India has issued a statement pic.twitter.com/ezg28wgkb9