No, the President Was Not Stopped From Entering the Pushkar Temple

Despite the local administration claiming that the prayers were offered from outside the temple because the president’s wife had difficulty in climbing the stairs, various posts and tweets asserted that the president had been a victim of casteism.

President Ram Nath Kovind and First Lady Savita Kovind being presented a memento on their arrival at Pushkar in Rajasthan on May 21. Credit: PTI

Note: This article was originally published on May 23, 2018 and is being republished. Patrika has reported the tragic incident of a pujari at the Brahma temple in Pushkar being stabbed by an assailant who declared he was angered by “President Kovind not being allowed to enter the temple”. The “news” was fake and The Wire debunked it. The attack is a reminder of the grave consequences that fake news often has.

Jaipur: After President Ram Nath Kovind and his family visited the Brahma temple in Pushkar and offered prayers from the stairs on May 15, photographs and forwards started circulating on social media claiming the priests had objected to the president entering the temple on caste grounds, thus compelling him to worship outside.

President Kovind is a Dalit and historically many prominent temples across India and especially in Rajasthan had discriminated against Dalit Hindus by preventing them from entering. The purported news from Pushkar was, however, fake.

Despite the local administration claiming that the prayers were offered from outside the temple because the president’s wife had difficulty in climbing the stairs, various posts and tweets asserted that the president had been a victim of casteism. 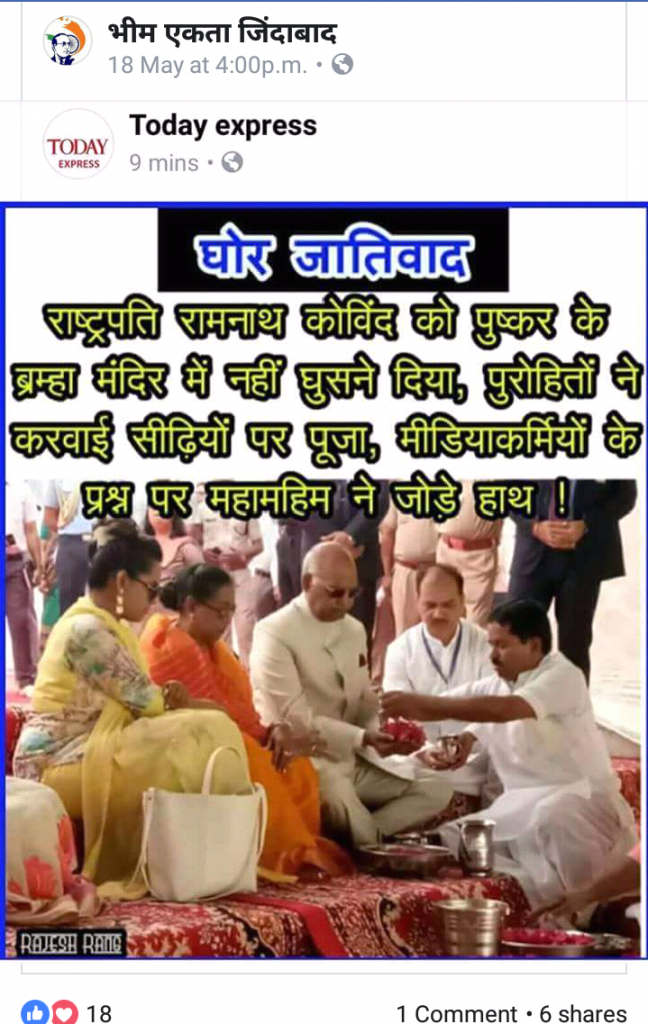 This post claiming President Kovind was a victim of caste discrimination was widely circulated on social media Credit: Facebook 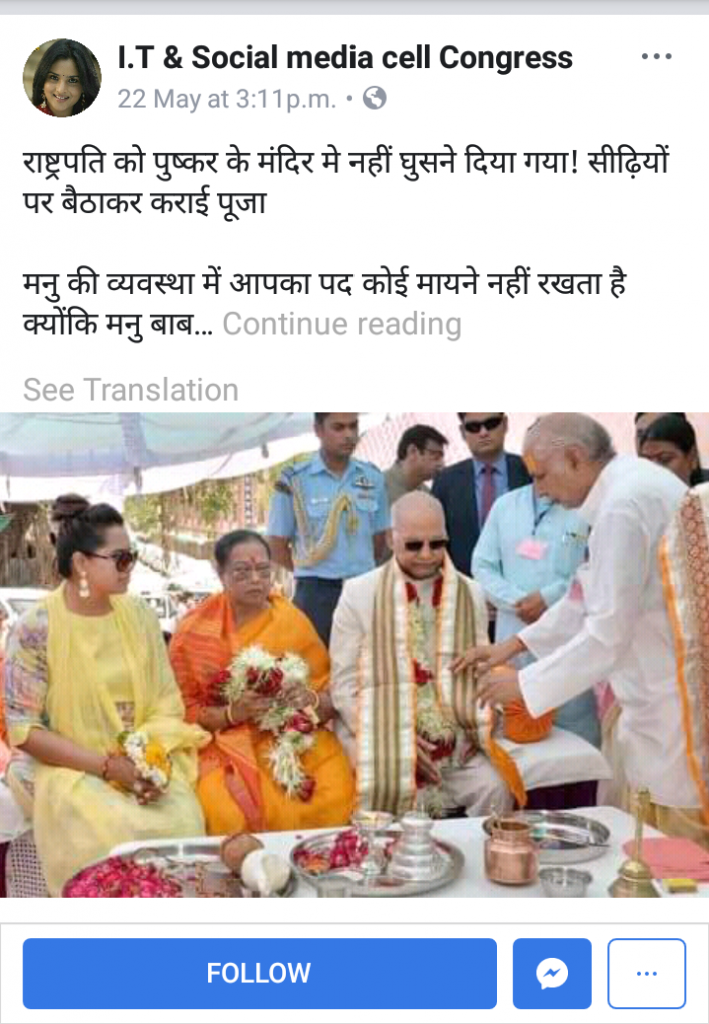 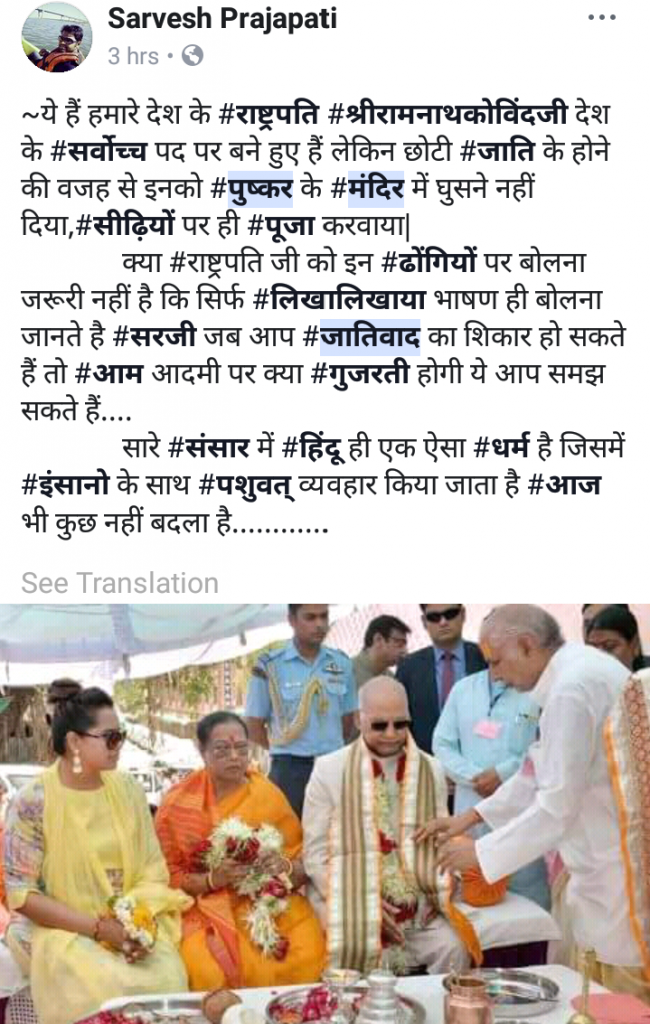 A wrongly captioned image by Times of India added to the suspicion that had already invaded social media. On his visit to Pushkar, the president offered prayers at two places – Pushkar lake and the Brahma temple. However, ToI published a picture of the family offering prayers from the top of a set of steps at Pushkar lake and wrongly headlined it as ‘Prez visits Brahma temple in Ajmer.’  Pushkar is close to Ajmer. Tweets that used the ToI picture to prove that the President was stopped from entering the temple. Credit: Twitter

Since, the angle from which the image of the family at the lake was taken, no stairs were visible from their back. It made people believe that they were already at the top of the stairs at Brahma temple but the priest stopped them from entering inside.

Speaking to The Wire, Krishna Gopal Vashishth, priest at the Brahma temple, said, “When we got to know about the president’s visit, we arranged the prayer at the garbha griha (main temple), opened especially for VIP devotees. It was only a day before that we were told that the prayers will be offered on the steps as the president’s wife has difficulty in climbing steps.”

Asked whether he stopped the president and his family from entering inside the temple, he replied, “We insisted the couple come inside several times but they refused. Later, the president sent his daughter [inside] for darshan at the garba griha. I myself took her.” The prayers were offered from middle of the stairs of the Brahma temple. Credit: Special arrangement

The fact that the daughter went inside the temple for darshan with the priest renders the allegation of casteism baseless. Also, at both the places – Pushkar lake and the Brahma temple – the president and his family refused to climb the steps. However, the fake news posts highlighted only the temple’s part.

“Even to reach the lake, there are few stairs but the couple and their daughter didn’t go down them and offered the prayers from the one of the stairs. …Whatever is in circulation on social media is fake news,” Surendra Rajguru, priest at the Pushkar lake told The Wire.

The district administration responsible for the arrangement at the Brahma temple called the allegations frivolous.

“How can even people think that way? Who can stop the president from entering the temple? We don’t even wish to respond to such frivolous accusations,” said Vishnu Kumar Goyal, sub-divisional magistrate, Pushkar.

Meanwhile, the press secretary to President Kovind, Ashok Malik tweeted an explanation, “President’s visit to Pushkar was very short as he had to fly to Mumbai that afternoon. Despite repeated requests of government, temple authorities and the priests, his schedule didn’t permit him a full darshan. This was entirely the president’s decision. There was no other factor at all.”