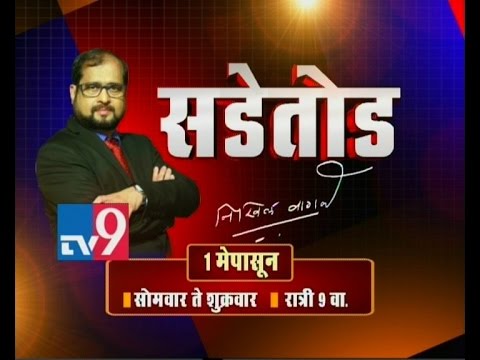 Pune: Two and a half months after it began, a popular show on Marathi television run by well known journalist Nikhil Wagle was cancelled by the channel’s management without any explanations leading to charges of political pressure.

Wagle was suddenly informed on Wednesday that his show, ‘Sadetod’, which aired on TV9 every night between 9 p.m. and 10 p.m., would not be screened from the next day. In its short span, the show – in which Wagle would moderate a debate with representatives of different political parties and organisations – had reached the highest viewership among Marathi news shows.

After completing the episode for July 19, the management at the TV9 channel informed Wagle that they were closing down the show from the next day. Wagle was shocked as his agreement with the channel was to host the show for a year. And within two and a half months of the show starting, the channel had decided to close the show.

TV9 began as a Telugu channel in 2003 and has since expanded its footprint to cover 7 languages.

“It is political pressure. I don’t think there can be other reason. The debate show had the highest ranking and a large number of viewers. The show helped the channel to get a higher ranking,” Wagle told The Wire.

Though The Wire was unable to to get TV9 management to speak on the issue, the channel told Newslaundry that Wagle’s show was not doing “as per expectations and the numbers were not good”.

This is the second case in recent days of a senior journalist and editor finding himself out of a job suddenly because of issues with management. Earlier this week, Paranjoy Guha Thakurta quit as editor of the Economic and Political Weekly (EPW) after the Sameeksha Trust, which publishes the magazine, accused him of ‘grave impropriety’ in seeking legal opinion without the trustees’ approval. Thakurta and the magazine had been threatened with legal action by lawyers acting on behalf of the Adani group.

According to Wagle, things were not going smoothly in the last month or so. “I had been sensing trouble for the last one month and the management would crib over trivial issues. I was asked why I talk against Narendra Modi or the BJP. My show had spokespersons from all the political parties including the BJP. How could I then be blamed for criticising a single party or man?”

On the show, he said, he had been critical of the Maharashtra government’s failure on various fronts “During the farmers’ strike, I hosted shows from places like Nashik and Puntamba where the strikes had started. I exposed how the government was fooling farmers with false promises. I ran many shows criticising cow vigilantes and their attacks on innocents. That did not go well with the members of a certain party. I unearthed scams in slum rehabilitation projects which were connected to senior government ministers. This must have displeased the BJP.”

For Wagle, this turn of events is familiar. He pointed out a pattern since 2014 when the BJP government came into power “I was the editor of IBN Lokmat and would run shows criticising government policies. When the Ambani group took over IBN (Network 18) I knew I would not get editorial freedom and I quit the channel. Later, I joined another Marathi news channel, Mi Marathi, but ministers like Vinod Tawde began to put pressure to not do shows that criticised the government. And now this is TV9.”

Still, he said, he was surprised because it was the management of TV9 that had approached him. “They had approached me to host the prime time show. I had then told them that I needed completed freedom and that they may get political pressure but they had assured me that they would ensure that did not happen.”

“The management had given him one month time to achieve certain parameters and Wagle had accepted it. ‘When he could not meet what he promised, the management has decided to change the time of his programme. Today in the name of oral and written communication, he wants to litigate for personal benefit.”

Wagle disagrees. “The management and I are bound by an agreement – they should have given me one month notice. As the channel has breached a contract it should give a valid reason. Otherwise I will take legal measures… Certain political parties want to shut my voice but I will continue my work with the same principles as I have all these years,” he told The Wire.

Note: The article was edited on July 22 to include quotes TV9 management gave to Newslaundry