The National Broadcasting Standards Authority has directed Aaj Tak to remove the show from YouTube within seven days. 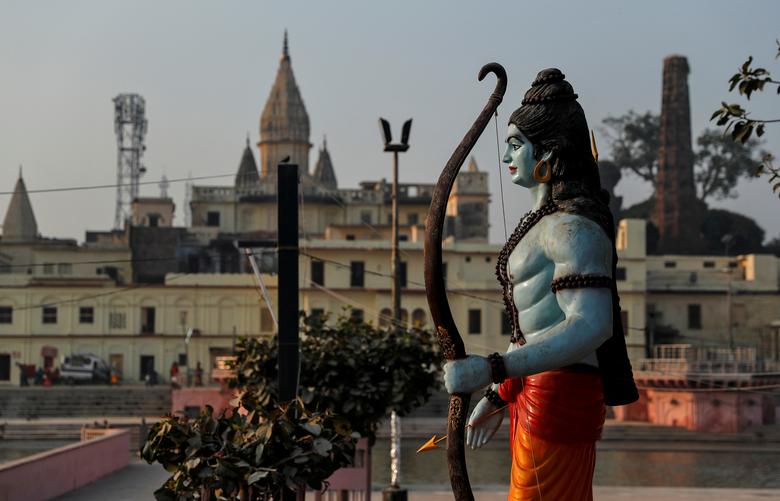 A statue of Ram is seen after the Supreme Court's verdict on a disputed religious site, in Ayodhya, November 10, 2019. Photo: Reuters/Danish Siddiqui

New Delhi: Following a complaint from Citizens for Justice and Peace (CJP), the National Broadcasting Standards Authority (NBSA) has reprimanded television news channel Aaj Tak for broadcasting communally divisive and inflammatory content during its coverage ahead of the Supreme Court’s delivery of the verdict on the Ram Janmabhoomi-Babri Masjid case.

In a show hosted by Rohit Sardana on the channel, one of the guests, one Swami Karpatri, had declared, “On November 18, the formation/birth of Ram Janmabhoomi will begin; the judgement will undoubtedly be in our favour.”

This had violated the special advisory issued by the NBSA that explicitly mentioned guidelines to be followed by news channels while telecasting news and holding debates pertaining to the Ayodhya case.

The NBSA has now directed Aaj Tak to remove the controversial programme from YouTube and report compliance within seven days.

It also observed that, “broadcasters would be responsible for violations of broadcasting standards and guidelines in regard to the content of any programme aired on the channel; that neither any ‘disclaimers’ before any programme nor the fact that offending statements/views expressed by independent anchors, invited guests or other participants, would relieve them from the liability/responsibility for violation of the standards/guidelines of NBA/NBSA.”

Satisfied with the NBSA action, CJP secretary Teesta Setalvad said, “This is part of CJP’s ‘Hate Hatao’ campaign. Television channels, driven by ‘TRP ratings’ often forget to draw the constitutional line. CJP will continue to do its bit in monitoring hateful coverage on television and in the print media.”

Aaj Tak had also posted a provocative tweet, on October 15, a day before final hearing of the Ayodhya case, that said, “Our [Hindu] land, our Ram, where did the mosque come from?”

When CJP objected that the caption does not carry any disclaimer saying that it is not a view endorsed by the news channel, Aaj Tak said, that the caption “was taken out of the discussion that took place in the courtroom during the hearing of civil appeal in the Ayodhya dispute.”

While NBSA took strict note of the debate programme on Youtube, the tweet posted by Aaj Tak could not be inquired into as monitoring of hate or inciteful content on social media does not fall under its jurisdiction.