In a separate order, Zee News was censured for calling members of the Constitutional Conduct Group "cunning" and a "gang". 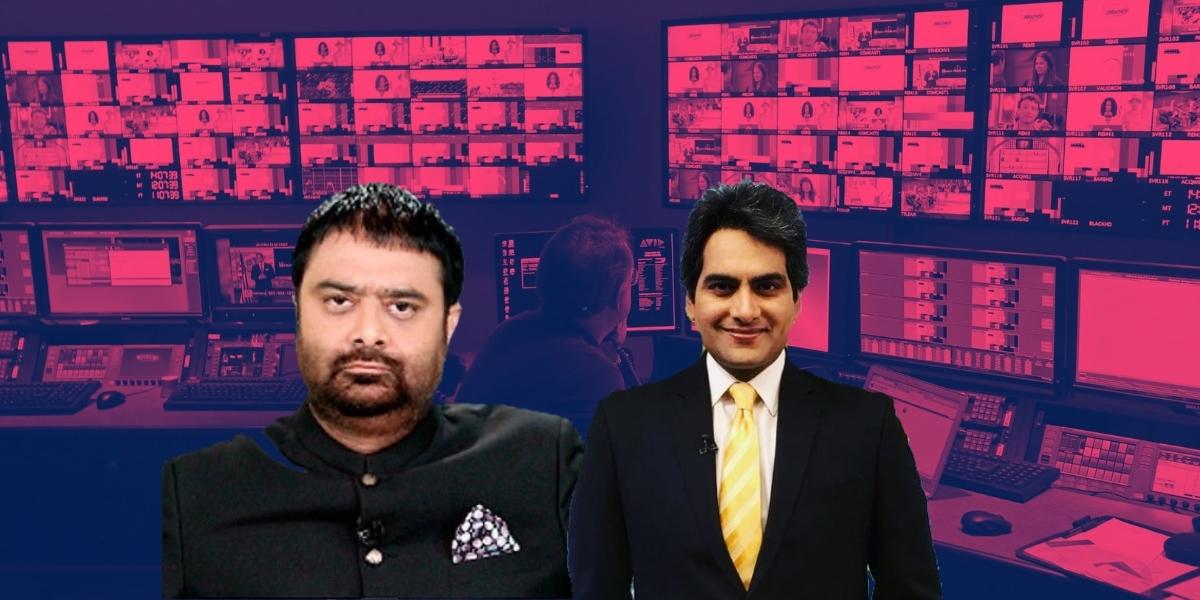 Anchors Deepak Chaurasia and Sudhir Chaudhary with a TV control room in the background. Illustration: The Wire

New Delhi: The News Broadcasting and Digital Standards Authority (NBDSA) has issued more orders censuring TV channels for airing programmes that violated the Code of Ethics and Guidelines, faulting News Nation for a debate on “conversion jihad” and Zee News for describing members of the Constitutional Conduct Group (CCG), who are all former civil servants, “cunning” and a “gang”.

The self-regulatory body of private TV channels has issued a slew of orders during this month. As The Wire has reported earlier, Times Now was asked to take down two videos on the Delhi riots of February 2020, in which the channel’s anchors did not conduct debates in an “impartial and objective manner”. Zee News was also asked to take down a video in which farmers who were protesting against the farm laws were called “Khalistanis”. The full list of orders issued by the NBDSA, which is chaired by former Supreme Court judge A.K. Sikri, can be found here.

The complaint against the programme on News Nation was filed by the NGO Citizens for Justice and Peace, saying that anchor Deepak Chaurasia during his ‘Desh Ki Bahas’ show discussed ‘conversion jihad’ on November 6, 2020, which was a made up term referring to alleged forceful conversion of Hindus by Muslims. The anchor was “selling hate by insinuating that the ‘Hindustan’ we are living in was no longer safe for Hindus”, the complaint said.

The NBDSA, after going through the complaint, the broadcaster’s response and reviewing the footage of the broadcast, noted that certain statements made by the anchor and captions such as “Memchand zinda hai Jamaat sharminda hai”; “500- Hindu kaise banaye Muslim?” and “Kya Mewat Pakistan ban gaya?” that were aired during the impugned programme violated certain guidelines on adhering to racial and religious harmony.

The body, in its order dated November 13, also noted that the broadcaster had in its response made “generalised submissions” which claimed it ensures due diligence in its programme and also apologised if the hurt the sentiments of the members of a particular community. “However, it had failed to submit any specific reply to the grievances of the complainant,” the order says.

The NBDSA observed that the broadcaster had in previous complaints and hearings made similar submissions and expressed regret, promising to strictly adhere to the Code of Ethics and Guidelines and take corrective action.

“In view of the above submissions by the broadcaster, NBDSA stated that there was need for introspection on the part of the broadcaster and it should take remedial actions/measures against anchors who fail to remain neutral and impartial during broadcasts,” the order says. It suggested that anchors should be trained regarding the manner in which they should conduct programmes or debates.

The channel was asked to remove videos of the said broadcast, if still available on the website of the channel or YouTube or any other platforms, immediately.

Meanwhile, in another order dated November 22, the NBDSA looked into the Constitutional Conduct Group’s complaint, which said Zee News’s Sudhir Chaudhary – who is a board member of the National Broadcasters and Digital Association under which the NBDSA functions as a regulatory body – had maligned the group in a news programme aired on November 2, 2020. Discussing an open letter written by the CCG, which asked advertisers not to fund channels which spread “hatred and communal disharmony”, Chaudhary claimed that the group did not want channels which spread “truth” to be funded.

Chaudhary also accused the members of taking biased decisions during their time as civil servants but did not provide any evidence to support his claims, the complaint said.

Zee News defended the broadcast, claiming it was impartial and accused the CCG of bias, saying the open letter “appeared to be an attempt to stop the media from reporting on issues of national importance”.

The NBDSA was of the view that the channel had “certainly crossed boundaries by questioning the credibility of the members of the Constitutional Conduct Group (CCG) by calling them ‘cunning’ and ‘gang’.”

The body noted that the programme lacked impartiality, and the name-calling and mudslinging by the anchor also offended the standards of good taste and decency. The authority said that while the broadcaster was within its right to criticise CCG’s open letter, “the pre-determined judgment of the anchor cannot be construed to be an analysis”.

Zee News was censured for violating the Code of Ethics and Broadcasting Standards and directed the broadcaster to take down videos of the programme from its website, YouTube or any other platform.