Convention on attack on journalists throws up challenges faced by the fourth estate, especially in small towns and villages, even as Centre’s growing influence among owners threatens the entire fraternity. 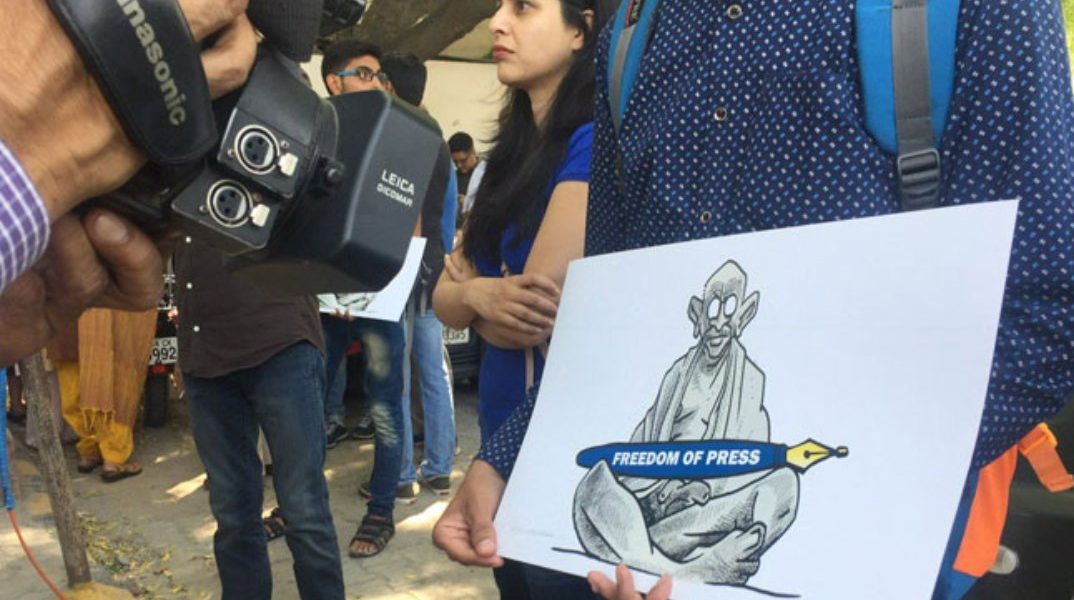 New Delhi: Journalists in small districts and towns are not only underpaid, they also face more threats and attacks from politicians, the police and the mafia. As for the media organisations they work for, they mostly exploit the journalists while utilising their services to raise revenue. To top it, the organisations usually desert them when it comes to even a whiff of trouble – such as when false cases are filed against them to intimidate them.

During the session on “misuse of law, state machinery and defamation”, Rachna Khaira, who had in January this year done a very incisive story for The Tribune on how UIDAI data pertaining to Aadhaar details of citizens was being sold at the rate of just Rs 500 for 10 minutes of access, spoke about how instead of rectifying the flaws in the system as exposed by the story, the Centre went into a denial mode. “The Union Minister for Law and Information Technology Ravi Shankar Prasad fought with me on this issue and an FIR was also registered against me,” she said.

Khaira said the story in the words of then editor-in-chief of The Tribune, Harish Khare, was “written in the best journalistic tradition” as it did not carry any agenda against Aadhaar but only sought to point out the flaws in its implementation. “We also made minimum use of the access to the UIDAI data,” she said.

Yet, Khaira lamented that the UIDAI, which had ignored warnings over leakage of data it had been receiving over emails, chose to file an FIR against the journalists rather than rectifying the flaw.

She suggested that whenever such motivated cases are filed against journalists, there should be a mechanism to provide them a government lawyer. “When we can provide Kasab a counsel, surely we can also have the provision for our journalists.” She also demanded that in such cases the journalists should be taken for questioning to redressal centres and not police stations and there should be fast track courts to try such cases.

Some of the journalists at the session also explained how cases are used to intimidate them so that they desist from asking uncomfortable questions. Shiv Das from Sonbhadra district of Uttar Pradesh narrated how an FIRs were registered against him for writing on diversion of funds meant for schools and also for raising issues pertaining to NREGA payments. In one of the cases, “the sub-inspector told me that the FIR was lodged because my writings were ‘critical’ of the administration.” With the case being assigned to an officer posted 40 km away, he recalled how he was made to undertake those long trips, despite his having developed some problems with his legs by then.

Das said since some people with BJP-RSS links were involved in the cases exposed by him, nothing ever came of his expose. On the other hand, the cases filed against him have not been closed yet.

Prabhat Singh from Raipur in Chhattisgarh spoke about how in order to not let the world know how the Adivasis  were being treated in the forest areas of the state, the administration and police keep a close tab on local journalists, who also assist journalists from New Delhi or other big cities get stories on the Naxal movement. “But before a journalist reaches Chhattisgarh, information about him or her reaches the police as the intelligence agencies keep the phones and mails of all local journalists under watch.

Singh said he too was arrested in a case, eight months after the FIR was lodged. “To prevent me from getting bail, the papers were changed by the police and the case diary was not produced in court. It took me three months to finally get bail,” he said, adding that one of the senior cops in the state used to openly threaten journalists and NGO activists so that they did refrained from reporting truthfully.

Another journalist from Chhattisgarh, Anwesh Tiwari, recalled how the nexus of corrupt politicians, police and administration in the state wielded enormous power. “After I did a story on the education minister officer sending a dummy candidate to appear for his wife in an examination and about a collector’s wife taking up a job as a pilot in the aviation company of a prominent company operating in the area, this nexus got after me.”

He said when he was posted in Bastar by Rajasthan Patrika, the minister who was an MLA of the area and the officer, who had also been transferred there, got about 700 students to protest against his newspaper after as part of its “midnight reporting” package it ran a story on how some scheduled caste children were tortured with electric current by some scheduled tribe ones at a local care facility.

Similarly, he said, an FIR was registered against the newspaper correspondent for running a story on an warden’s male family members entering a women’s hostel at night.

With most of the journalists now also being asked by the owners to get advertisements for the publications, he said, it has become difficult for them to work on the stories objectively against such powerful interests. “It is the owners who decide if journalists become revolutionaries or commission agents,” he quipped.

Rai said small publications are now faced with an existential crisis because release of advertisements has been centralized and powers have been withdrawn from the district officials. “This has also impacted fairness of news. Earlier you could expose corruption in departments in the hope that others would still release advertisements to you, but now the release depends on the whim of just one person in the state capital.”

‘Real threat is to journalists in small towns and villages, not on those writing about Bofors or Rafale’

Another journalist from Chhattisgarh, Kamal Shukla, quipped that truth has been facing a threat since it was born. Out on bail in a case of sedition, Shukla said there was a need to expedite the passage of a draft law on protection of journalists which had been prepared in association with civil rights group, the Peoples’ Union for Civil Liberties.

Shukla quipped that the real stories were the ones that impacted ordinary citizens in small villages and towns. “We are the ones who also face the biggest threats. Has anyone received a threat for writing about Bofors or Rafale,” he asked.

Two FIRs against Moradabad journalist whose RTI led to deduction of Rs 6,000 from SSP’s salary

Salim Beg, who has been running a magazine from Moradabad for the last 10 years, said he had been using RTI as a tool to expose corruption and after a Rs 25,000 fine was imposed by the State Information Commission on the public information officer of the Superintendent of Police (Rural) and Rs 6,000 was directed to be deducted from the salary of SSP Moradabad by the panel in the first such order against a serving IPS officer, he was implicated in two false cases which are still running against him. “I was told by the SHO that he had been appointed to arrest me,” he quipped while showing how vendetta runs deep in the state.

The session on “surveillance and censorship” saw several senior journalists speak about the pressures the ordinary journalists today work in.

Senior journalist Om Thanvi said the tragedy of the day is that while the links of most reporters bring news, those of the editors only lead to their suppression. In an obvious reference to the BJP, he said, the offices that the party was supposed to have vacated, as it moved its national headquarters to a new building, were now being used to mount surveillance on the media and to control what gets published or shown and what does not.

In this light, he quipped that the statement of former French President Francois Hollande that it was the Indian government that had suggested Anil Ambani’s Reliance Defence as a service provider for the Rafale deal had found less mention in the media which highlighted more the BJP government’s statements and clarification in the matter.

Adityanath’s statement carries more weight than truth in UP

On how the governments manage the narrative, Manoj Singh, a journalist from Gorakhpur in Uttar Pradesh said recently when chief minister Yogi Adityanath claimed that there had only been six deaths due to Japanese encyphalitis no one in the media questioned it despite data showing there to be 161 deaths due to the disease. This, he said, was how media was being made made captive.

Singh said when a woman and her two children died of alleged starvation in Kushinagar district, the media again avoided covering the stories since the CM had claimed that the deaths were due to tuberculosis despite the medical records suggesting otherwise.

Another journalist Josy Joseph spoke about how the assault on journalists and journalism began at the time of Emergency itself and journalists have only contributed to it by allying with the political parties. Since 2014, he said, the powers that be have only been exploiting this situation more.

Joseph said while initially journalists accepted small demands from editors and owners to not do certain stories, “the problem has only grown with his government going on the offensive.” In the bargain, he said, the journalists got their salaries to suppress their dreams and values.

Some things do not change with the regime

Journalist and an activist associated with civil rights group People’s Union for Civil Liberties, Seema Yadav, narrated how she had been booked during the previous UPA regime under Unlawful Activities Prevention Act, which she demanded should be repealed as it trampled upon human rights.

“Before my arrest, then Union Home Minister P. Chidambaram had stated that UAPA would be imposed on all those involved in the Lalgarh agitation in West Bengal. This was a clear example of censorship,” she charged adding that imposition of UAPA amounted to misuse of democracy.

Yadav said merely reporting on agitations was held as evidence against activists and they were booked on basis of just papers pertaining to those protests. “When in my case Barkha Dutt had asked Mani Shankar Aiyar if she too could be arrested on similar charges for merely carrying such papers, he had replied in the affirmative,” Yadav said while noting how things were not much different in the Congress regime.

Well known television personality Punya Prasun Bajpai who was recently forced out of ABP news for running a story on Prime Minister Narendra Modi’s claim about a Chhattisgarh woman, Chandramani Kaushik’s farming income doubling was actually not true, spoke about how today in the media no one is stopped from pursuing a story – but the owners only go on to bargain with the politicians on whether to run them and how much.

Bajpai said what has changed since 2014 is that now the Centre wants to have a say in the way every institution functions and that has come to include journalism. He said while the RSS had begun experimenting on several aspects, including demonetisation during the Janata Party rule, these experiments were only being repeated now and probably on a bigger scale.

Senior journalist Hartosh Singh Bal said the situation was bad earlier but it has deteriorated since 2014. Stating that surveillance was nothing new, he said what has changed is the atmosphere of fear. “What the local mafia don, or an SP or Collector could do in a district – one man is doing in the country now.”

He also had a word of advise for journalists: “Leave the fear of losing your job. If you want to do good journalism, you will have to be in a good organisation which allows you to do it.”