In that period in April, Modi addressed 64 rallies across the country and Rahul Gandhi spoke at 65. Yet the top eleven Hindi channels lavished far more time on the Prime Minister. 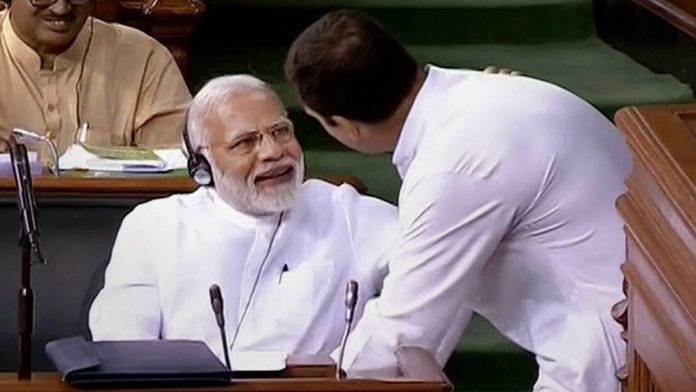 New Delhi: Confirming that news channels have broadcast the Bharatiya Janata Party’s campaign more widely than their opponents’ in this election season, a study of airtime between April 2 and 28 shows that the top 11 Hindi channel gave more than 850 hours of airtime to Prime Minister Narendra Modi and BJP president Amit Shah.

A report published in Dainik Bhaskar quoting data collected by the Broadcast Audience Research Council (BARC) says, within this nearly one-month period, while Modi was given a total of 722 hours by these channels, Shah could get 123 hours of airtime.

BARC data show that Rahul Gandhi was given about 251 hours within this period, and Priyanka about 84 hours.

Modi addressed 64 rallies across the country between April 2 and 28, Rahul spoke at 65 rallies within the same time period. Yet Modi managed to get more attention from the top 11 Hindi channels in the country.

The focus on the Prime Minister appears to help the channels amp up their TRP ratings.

TV news watchers do agree that Modi gets more attention than any other leader on the telly. For instance, when he did a road show a day before filing his nomination papers from Varanasi on April 25, channels went live for up to three hours. Also, his television interviews were quite long that day. Compared to that, TV reporters’ interactions with Rahul Gandhi on the campaign trail comprised only 25 minutes of airtime.

The recent ‘non-political’ Modi interview conducted by Bollywood actor Akshay Kumar was also telecast by all these channels at the same time. Data show that it could reach 1.7 crore viewers. Although Prasoon Joshi’s interview of Modi in April 2018 was watched by 2.5 crore people, the stickiness (watched by viewers for a longer period of time) of the Modi-Akshay conversation was far greater. In terms of impressions, the Modi-Akshay conversation was at 52 lakh, while ‘Bharat ki Baat’ by Joshi only drew 35 lakh impressions.

BARC data have also shown that TV channels beamed Modi’s Republic Day speeches for a longer period. While in 2016, the prime minister’s speech telecast on 137 channels was watched by 11.7 crore people, in 2017, 10.9 crore people watched it on 147 channels. In 2018, his speech aired in real time through 147 channels and could reach 12.1 crore viewers.

Abhinandan Sekhri of NewsLaundry opines that the question of who is getting more time seems immaterial, as the channels are anyway not doing what they are supposed to do. He says if we talk about time given on the channels, some aberrations aside, most parties are given equal time. But during this time, the opposition parties are presented in a lopsided manner.

In one period in November 2018, in the run-up to assembly elections in five states, the BJP became the largest advertiser on TV (in terms of number of ads broadcast). It had been in second position the previous week, but stole the number one spot from a paan masala brand.