How Newspapers Covered the Farmers' Protest in Mumbai

Most English and Hindi papers saw it only as a photo-op for the front pages, relegating the story on what had driven farmers to stage their protest to the inside pages. The Marathi press, however, gave the story due prominence.

New Delhi: As many grieved the ‘death of journalism‘ after television news anchors and reporters dived into bathtubs to solve the mystery of Bollywood star Sridevi’s ‘controversial’ death, some found solace in the fact that they could rely on newspapers to do their job.

However, the sad state of journalism in India was on display this Monday when the nation’s leading newspapers gave a wide berth to the farmers’ march in Maharashtra.

On March 6, 35,000 farmers began a gruelling journey from Nashik to Mumbai. After walking for almost 140 hours, they reached Mumbai late Sunday night. Their main demands include a total farm loan waiver, implementation of the Swaminathan Commission recommendations, transfer of forest land to those who have been tilling it for years and minimum support prices.

The Times of India, Mumbai’s largest circulating English daily, chose to run only a photograph of the rally but no story on its front page. 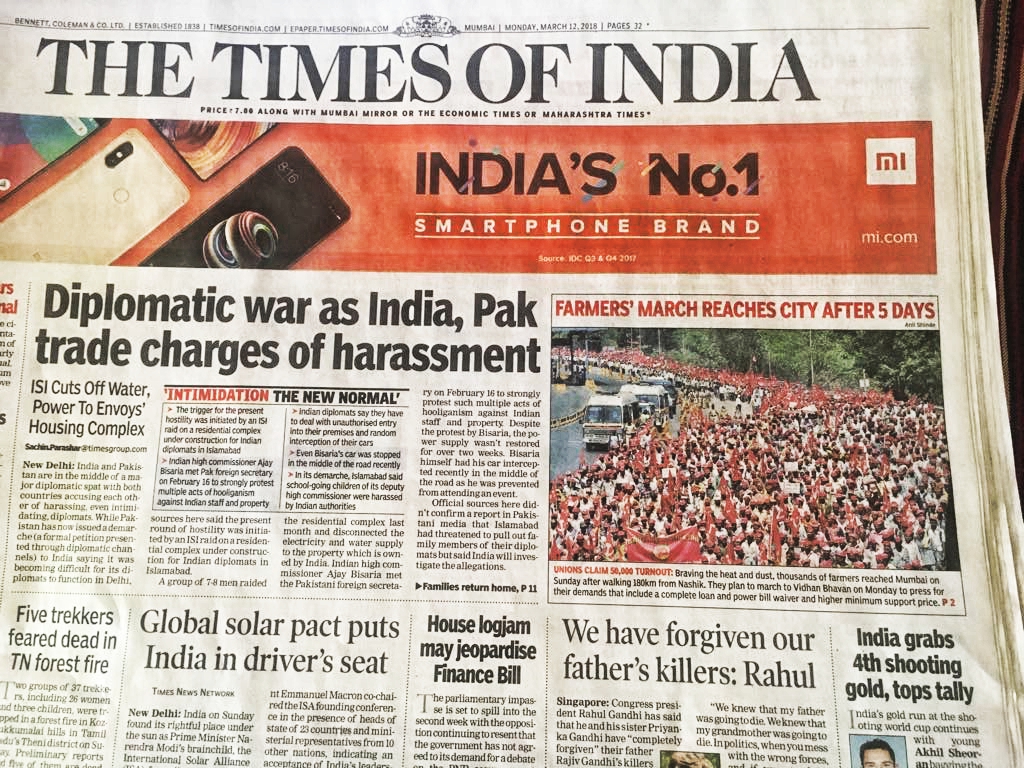 On the front page of the TOI’s Delhi edition, the protest was given just one sentence. They followed up the story on page eight and nine. 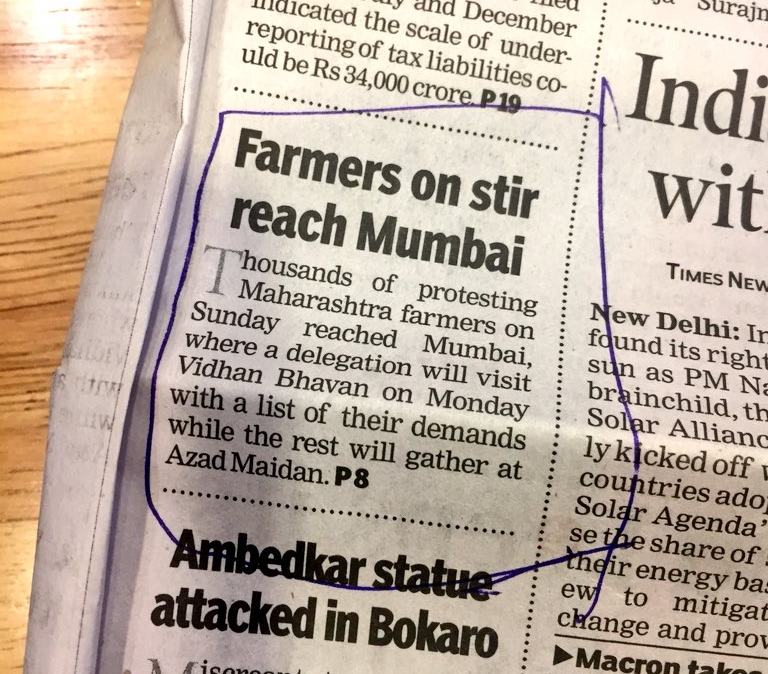 The Times Group’s Marathi newspaper, Maharashtra Times, did more justice to the issue and carried a photo and two reports on the front page on Monday. 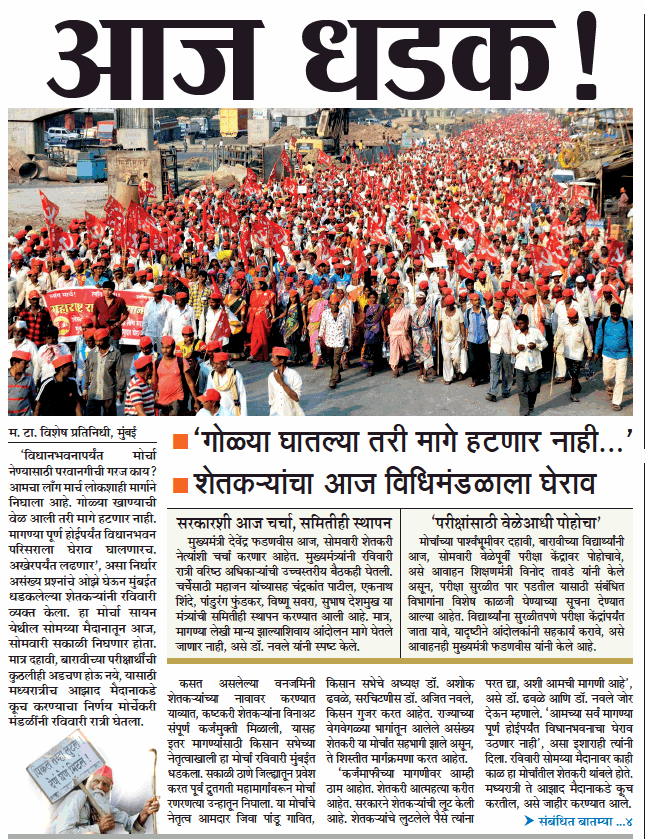 Mumbai Mirror, the group’s tabloid launched a few years ago to counter DNA and Hindustan Times, covered the story on front page and a follow up on page four.

Navbharat Times published a small photo with a caption on what it claims is the paper’s ‘front page-two’. In reality, it is the last page of the paper. 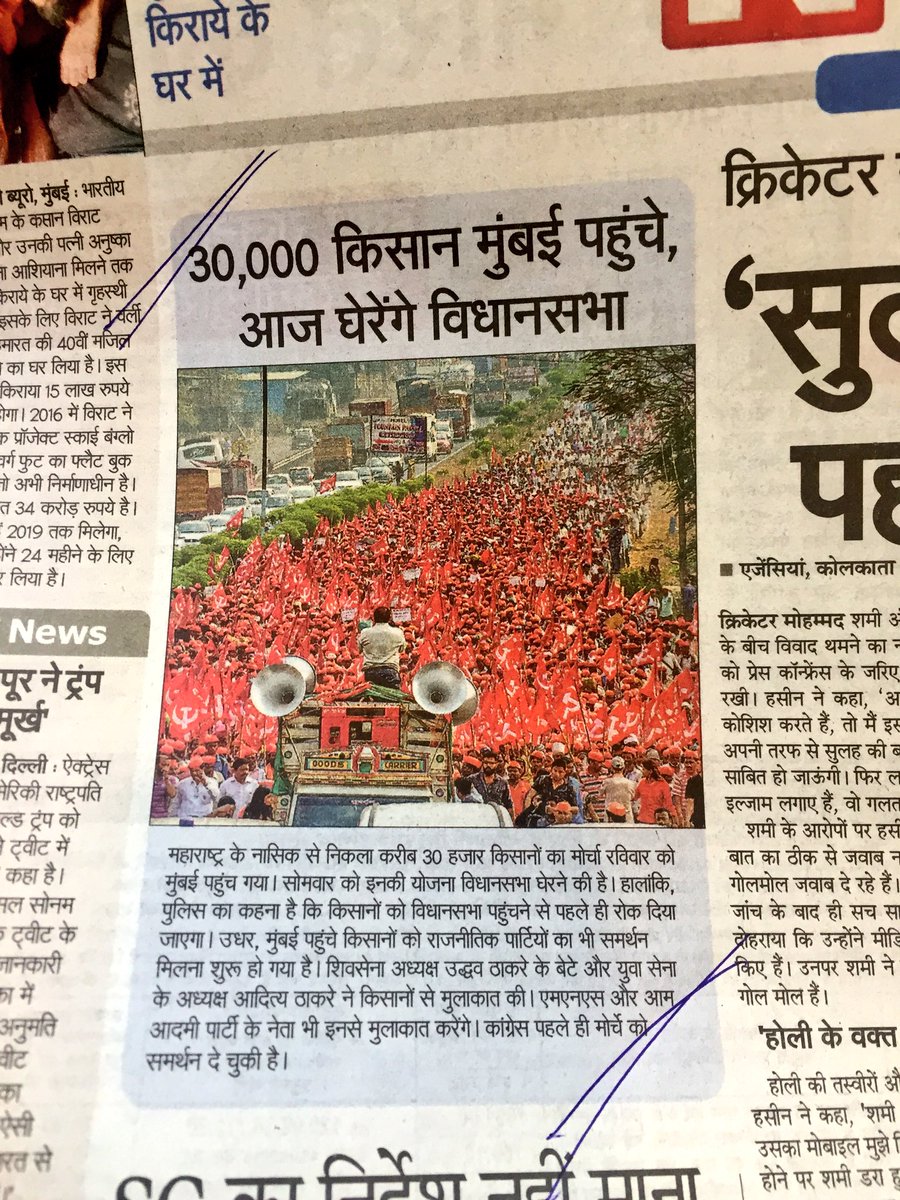 DNA, a joint venture by Zee Media & Dainik Bhaskar Group, in its Mumbai edition dedicated the left-top column on the front page and first half of page four to the story. 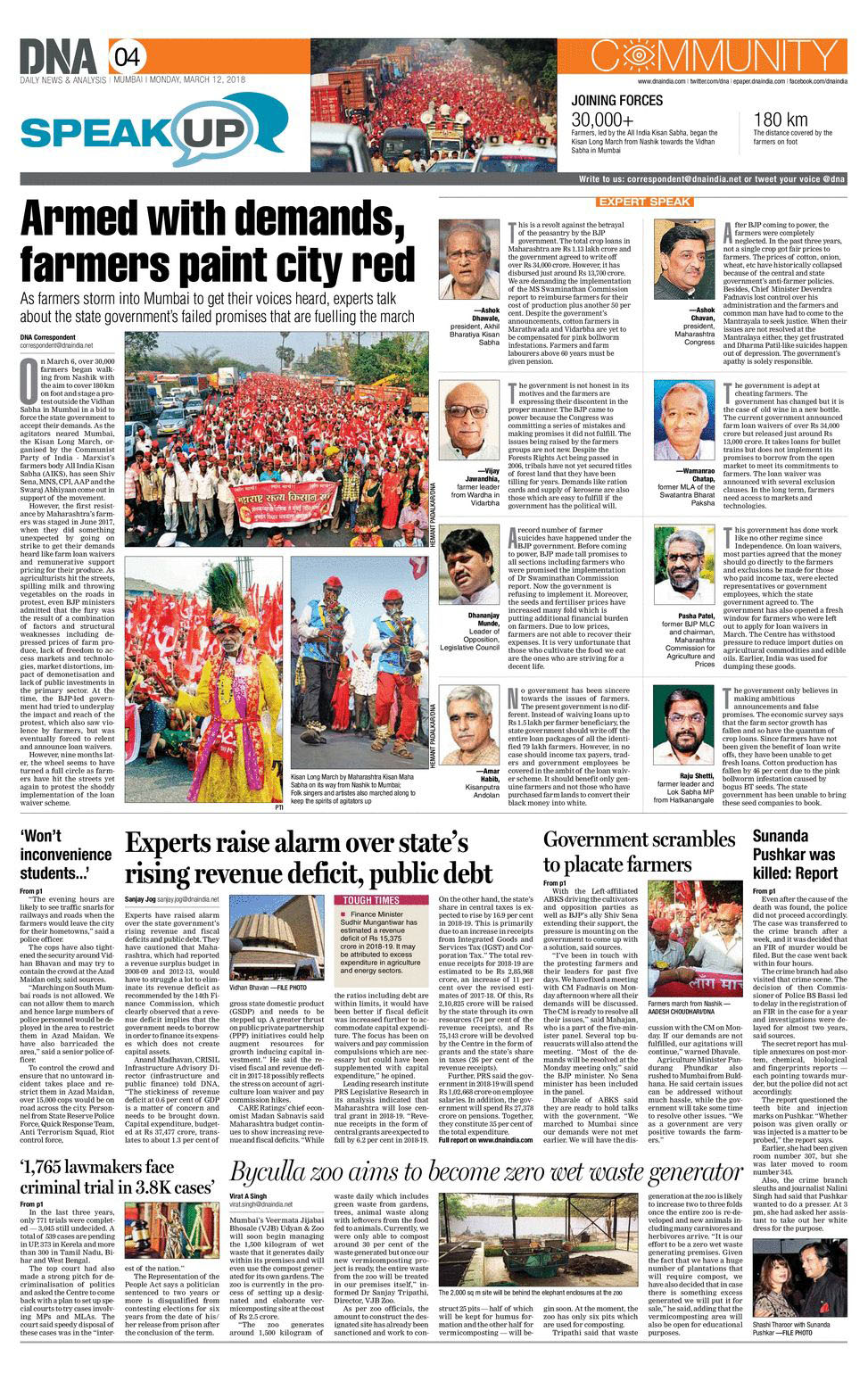 Hindustan Times‘s Delhi edition carried a photo on the front page and two reports on the protest and Maharashtra government’s response on page 10. 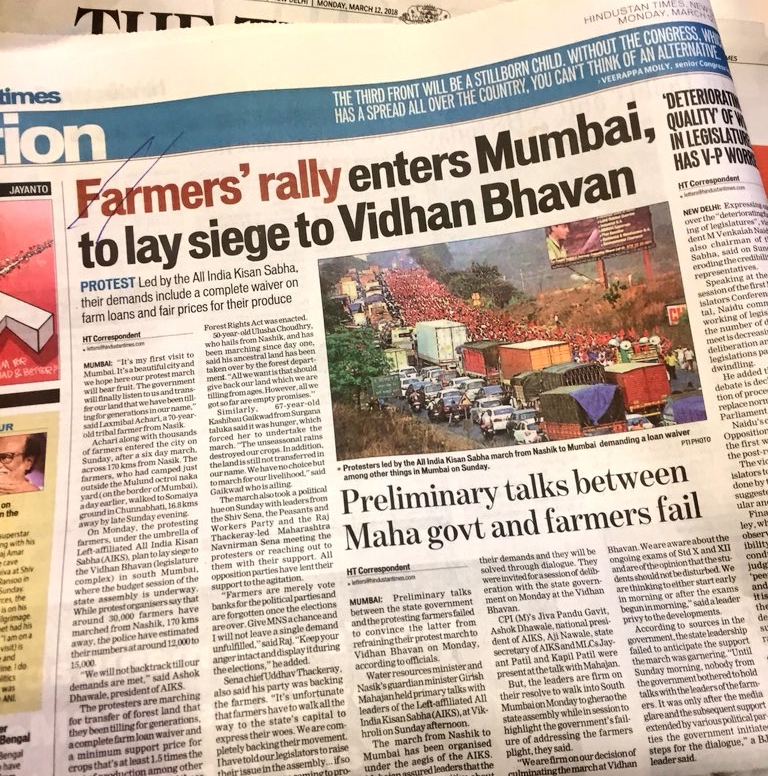 Unlike its English edition, Hindustan, in Hindi, carried a small agency story on its second page. 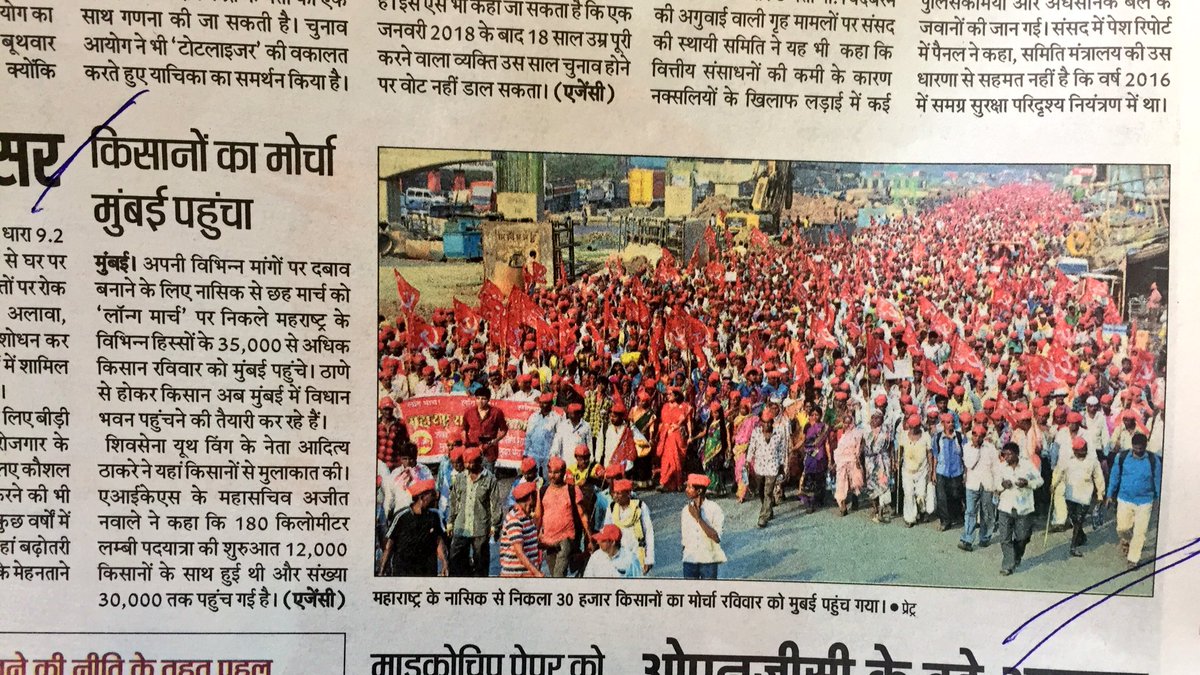 Curiously, the story couldn’t make it to the front page of one of the country’s most respected newspapers, The Hindu, which carried the story on page seven in its Delhi edition. 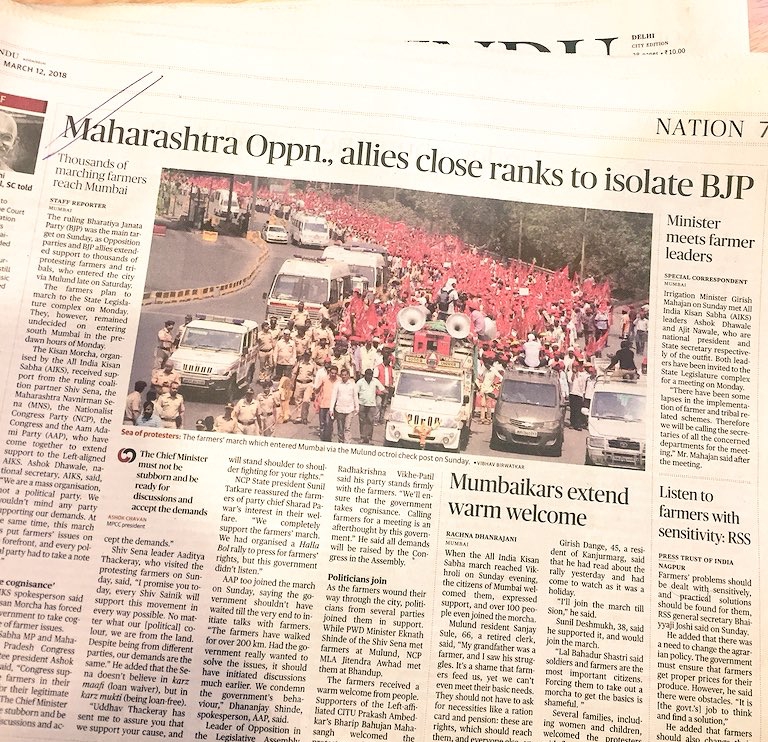 While the edition in Mumbai didn’t mention the farmers protest, the ‘Mumbai Local’ edition carried a full front page spread. 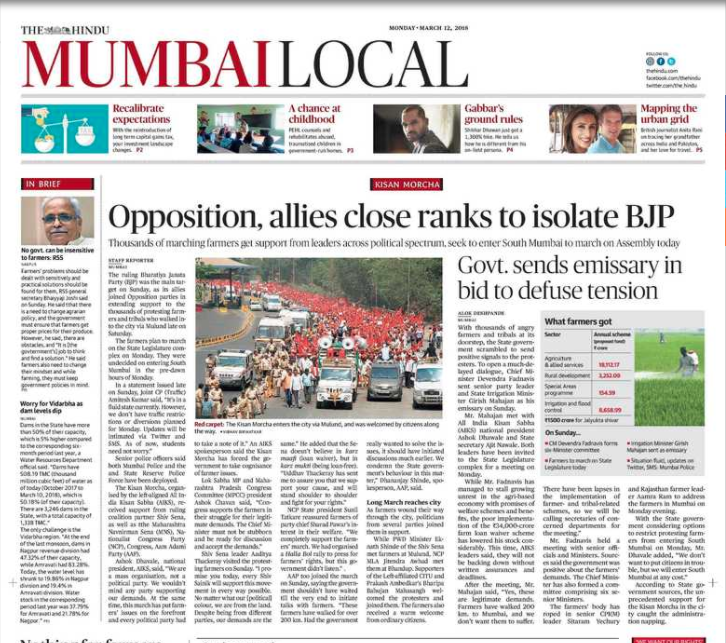 In its Bengaluru edition, the newspaper carried a small piece on the nation page highlighting politicians’ reactions to the protest instead of the farmers’ demands. 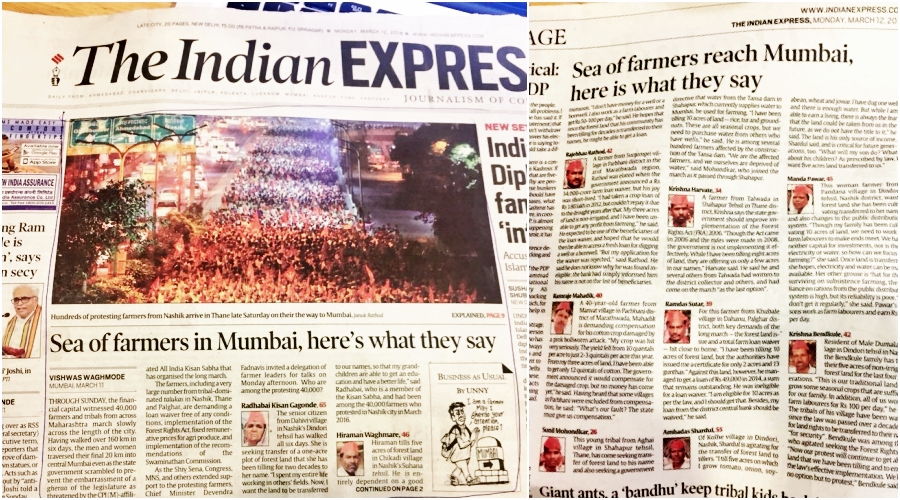 The Indian Express was the only national newspaper that gave the story proper coverage with the main slot on the front page and a follow up piece on page two with quotes from farmers.

Its Marathi newspaper, Loksatta, also carried the story on the front pages of its Mumbai, Pune, Nagpur and Nasik editions. The Marathi newspaper Lokmat, which sells over a million copies a day, carried the story on the front page of all its editions, except in Goa. 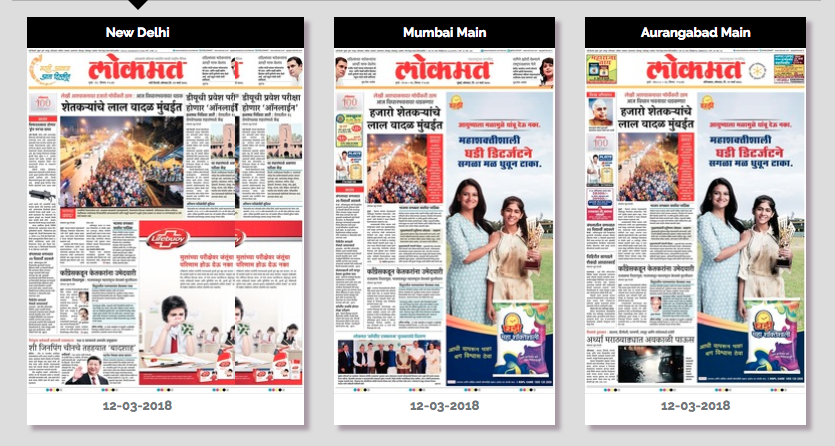 The newspaper publishes editions in several cities in Maharashtra.

While Jagran Prakashan Limited’s Hindi newspaper ‘Dainik Jagran‘ gave the story a miss in its Delhi edition, a small article showed up on the paper national edition’s page six.

The group’s Mumbai daily, Mid-Day, dedicated most of its front page to the story. However, its Urdu daily carried the farmer protest on its second last page. The Inquilab is one of the top read newspapers published in Urdu.

Rashtriya Sahara‘s Urdu edition, which comes close in terms of circulation, did not carry the story at all. 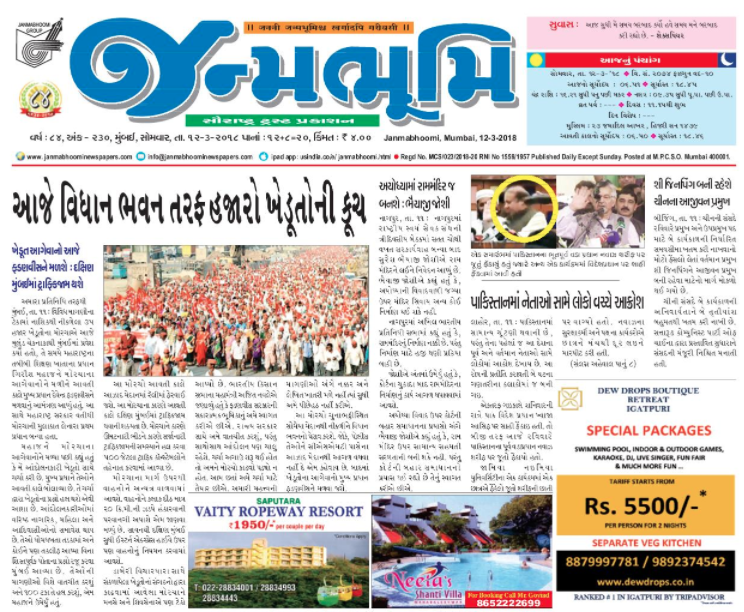 Marathi daily Navakal and Gujarati daily Janmabhoomi, which have been running for over 90 and 80 years respectively, reserved the top slots for the farmers’ protest.