Modi Government Turns Its Sights on Freedom of Digital Media

The information and broadcasting ministry has now constituted a committee to frame rules to regulate the functioning of news portals and media websites, including platforms like YouTube. New Delhi: A day after Prime Minister Narendra Modi ordered the Smriti Irani-led information and broadcasting ministry to withdraw its order laying down new guidelines punishing journalists for fake news, and official spin suggested her move had left him “fuming”, his government has now gone ahead and constituted a committee to frame rules to regulate news portals and media websites.

According to an official “order” issued by the ministry on April 4, a decision was taken to constitute a high-level 10-member committee comprising of the secretaries of the ministries of information and broadcasting, electronics and information technology, home affairs, legal affairs and the department of industrial policy and promotion as members.

There will be no representation from digital media – the very object of the government’s ‘regulatory’ exercise.

The order in the “terms of reference” for the committee noted that the idea behind constituting the panel was to “delineate the sphere of online information dissemination which needs to be brought under regulation, on the lines applicable for print and electronic media”.

Further, it stated that the committee would also “recommend appropriate policy formulation for online media/news portal and online content platforms, including digital broadcasting which encompasses entertainment/infotainment and news/media aggregators, keeping in mind the extant FDI norms, programme and advertising code for TV channels, norms circulated by PCI, code of ethics framed by NBA and norms prescribed by IBF.”

The third and final term of reference for the committee would be to “analyse the international scenario on such existing regulatory mechanism with a view to incorporate the best practices”.

Order says need to have regulatory framework for digital media

On the reason behind constituting the committee, the order said, is that while television channels are required to adhere to the programme and advertising codes mentioned in the Cable Television Networks (Regulation) Act, 1995 and “there exists a well-settled mechanism for dealing with any violations thereof” and similarly, the PCI has its own norms to regulate the print media, “there are no norms or guidelines to the to regulate the online media websites and news portals including digital broadcasting”.

Therefore, it noted that “it has been decided to constitute a committee to frame and suggest a regulatory framework for online media/new portals including digital broadcasting and entertainment/infotainment sites and news/media aggregators.”

Largely due to their ability to lean on media owners, governments at the Central and state level exercise considerable influence over the print media, while official licensing terms make electronic media even more vulnerable to official pressure.

Though the order makes the claim that digital media is unregulated, legal experts say this is hardly the case.

In the case of digital media, the government has the Information Technology Act, which provides for criminal liability of “intermediaries” for content that they upload or circulate. The government has used these powers to take down posts or pages or block certain websites, mostly on grounds of copyright violation/content piracy, but also for hosting content deemed offensive. Foreign digital platforms like Facebook, Twitter and YouTube have all complied with these demands.

Besides the overarching regulatory framework of the IT Act, digital media outlets are subjected to more or less the same rules governing the publication or dissemination of other forms of content, such as the laws of civil and criminal defamation, and other relevant provisions of the Indian Penal Code.

The reference to “digital broadcasting” suggests the government is looking to formulate a policy that would allow it to subject news and current affairs content distributed via YouTube, Facebook and WhatsApp to the same degree of control as it exercises over conventional broadcasting. For example, the government does not allow private FM stations to broadcast news and current affairs. But its ban does not apply to web radio.

Similarly, Indian citizens are allowed to upload video content directly on to a platform like YouTube or WhatsApp which other Indians are free to watch without first getting a license from the I&B ministry. Given that the internet allows every citizen to function as “media”, tt is not clear how the committee set up by the ministry can hope to formulate a regulatory framework for digital news that will not encroach upon constitutionally guaranteed freedoms, especially since the exercise of those freedoms are already subjected to the “reasonable restrictions” envisaged by the constitution itself.

Under Irani, curbs on press are growing 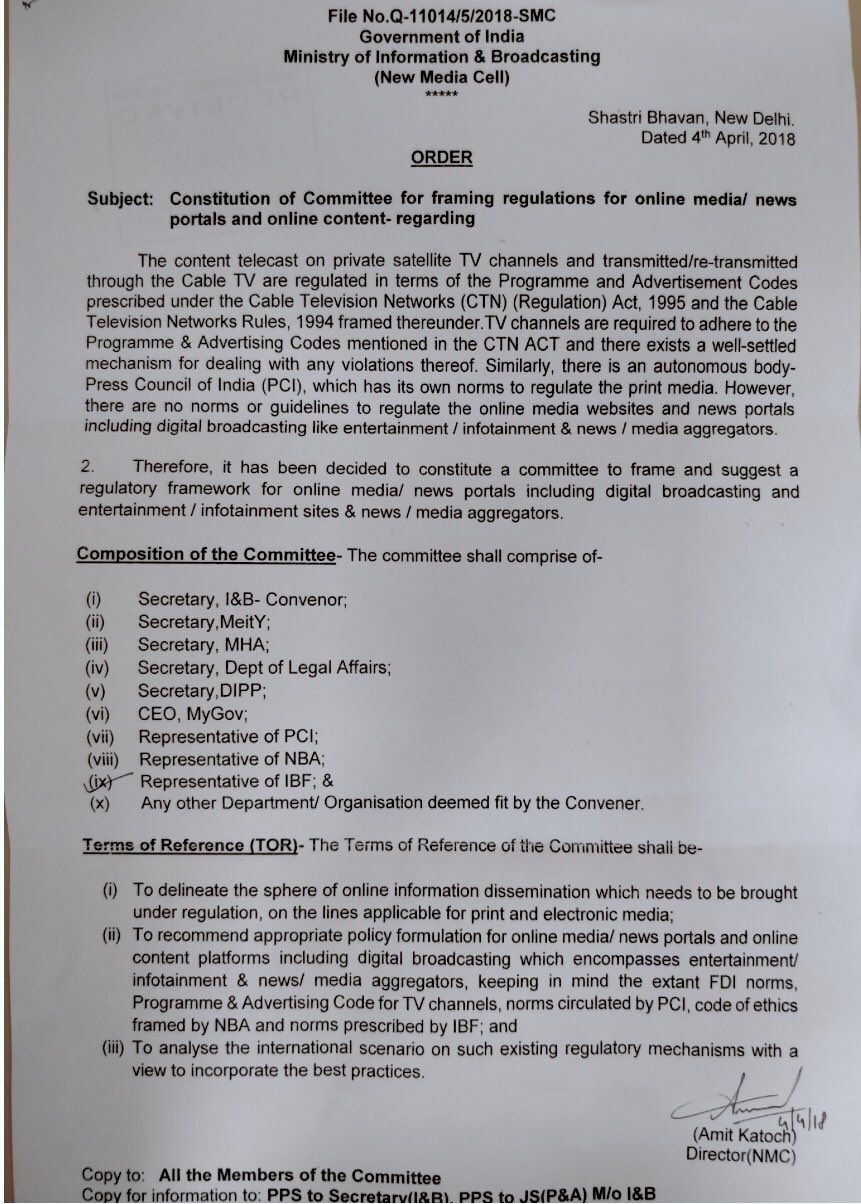 As I&B minister, Smriti Irani has come under fire for seeking to curb the free flow of information. The April 2 announcement on curbing fake news was seen as one such attempt since, apart from merely attempting to clamp down on such news, it envisaged the suspension of a journalist’s accreditation simply on the basis of a complaint.

It was only when the decision was panned as an attempt to muzzle press freedom that Modi intervened and directed the ministry to withdraw its controversial order. However, the ministry’s order announcing its intention to “regulate” digital media suggests the government remains committed to finding ways to restrict the freedom of the media, especially of digital platforms and websites.