Sister-in-law of the deceased alleged that the police placed someone near the pyre to falsely project that the family was present during the funeral. 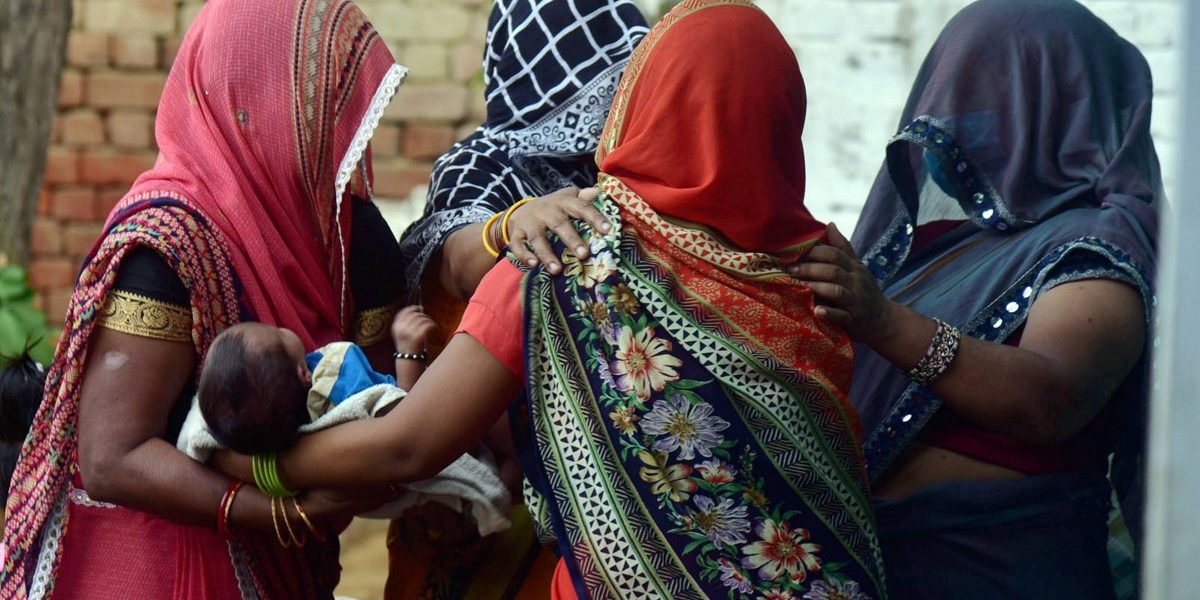 Family members and relatives mourn the death of a 19-year-old woman, who was gang-raped, in Hathras district, Tuesday, September 29, 2020. Photo: PTI

A 19-year-old Dalit woman in Uttar Pradesh’s Hathras was allegedly tortured and gang-raped by four upper-caste men on September 14, 2020. She succumbed to her injuries on September 29, 2020. The UP police reportedly cremated her body in the dead of the night early September 30, 2020, as family members and villagers attempted to stop the funeral process.

The accused were charged with gang-rape and attempt to murder ten days after the incident based on the victim’s statement who was fighting for her life in Delhi’s Safdarjung hospital. Following her tragic demise, the UP police said there is “no proof” of rape. Hours later, she was cremated without the family’s consent as cops blocked relatives, the media and protesters from the funeral ground.

The police denied that the woman’s last rites were performed without her family’s permission. A video has been pushed on social media platforms to support the police’s version of events. Bharatiya Janata Party (BJP) Haryana IT cell head Arun Yadav tweeted, “Victim’s family did her last rites themselves.” He blamed the media for ‘propaganda’.

TRUTH: Victim’s family did her last rites themselves pic.twitter.com/sok0DvCcwz

The video shows a person behind the camera questioning an elderly man’s relationship with the victim. While the old man is barely audible, people around him say, “Ladki ke baba hai ye (He is the woman’s baba.)” The word ‘baba’ could mean father, grandfather or an elderly male relative/acquaintance. The voice behind the camera then says, “Aap baba ho na? (You’re her baba right?)” to which the man nods his head in affirmative. “Acha thik hai (Alright then),” the person behind the camera says, following which the audio is muted for six seconds. The subsequent scenes show people, including the elderly man, performing rituals around the pyre.

TRUTH: Victim’s family did her last rites themselves.

Instead of spreading fake rumours to build political narratives, let us concentrate on ensuring #JusticeForManisha. pic.twitter.com/SPFgc6SVco

Hathras District Magistrate claimed that the deceased’s father and brother consented to the funeral and her family members were present during the last rites.

The allegations that funeral was conducted without family’s consent are wrong. The father & brother gave their consent to conduct funeral at night. Family members were also present at funeral. Vehicle carrying victim’s body was present at village from 12:45 to 2:30am: #Hathras DM pic.twitter.com/muZeiACF9L

Did the victim’s family members participate in her funeral?

India Today journalist Tanushree Pandey was reporting live from the ground in the early hours of Wednesday. She tweeted a video where villagers and family members are seen blocking the ambulance and begging the police to let them take their daughter home. The pleas, however, fell on deaf ears and a burning pyre could be spotted at a distance.

#HathrasCase Major ruckus in the village right now. UP cops & officials forcing kin to cremate body overnight. Family begging that let us at least take the girl home one last time. Village people came in front of the ambulance, saying “we will not let you burn our girl forcibly” pic.twitter.com/gHAv4Oq5Yd

The victim’s brother confirmed to Alt News that no one from his family was permitted to attend the cremation. He also said that his grandfather died in 2006 which means that the elderly man in the video cannot be the woman’s grandfather.

Several other outlets showed visuals of women blocking the ambulance carrying the victim’s body. Mojo spoke with the woman’s father who stated that the police locked the family inside their house and conducted her funeral in their absence.

NDTV spoke with relatives locked inside their houses alleging that neither did they consent to the funeral nor was the victim’s body handed over. One of the men says that the deceased’s father consulted relatives and decided that the funeral will be held in the morning with all customs and rituals.

However, the police did not permit the family to attend the dead-of-night cremation.

Watch | “None of us could attend the last rites and the body was also not handed over to us. Everything was done by the police. No one is talking about justice to us”: relatives of the victim to NDTV #HathrasCase pic.twitter.com/6zIn4oFmrP

The father’s statement was also taken by NDTV at night when the cops formed a human chain to disallow people, including media persons, from entering the funeral ground.

CNN’s Marya Shakil reported that the family’s wishes to conduct a funeral with Hindu rituals were not met as the police performed her last rites. The victim’s mother said, “They [police] did not give my daughter’s body. They took her away. They could’ve at least let me see her face one last time. But they didn’t let us bring her body home. We pleaded but they didn’t listen.”

#HathrasHorror– We begged the administration to allow my daughter’s remains to be brought back to our house, but no one listened: Hathras Rape Victim’s mother tells @maryashakil pic.twitter.com/6LWPM3hUJo

In another video, the mother can be seen inconsolably wailing and saying that she wants to perform her daughter’s last rites with Hindu rituals.

The victim’s brother also said that her dead body was forcibly cremated.

#HathrasHorror – The District Magistrate told us not to politicise the issue and cremate my sister’s body in the night, we tried to resist but they did not listen to us, they took the body and cremated her: Hathras Rape Victim’s Brother tells @maryashakil pic.twitter.com/x1CyKyPxeJ

Her sister-in-law alleged that the police placed someone near the pyre to falsely project that the family was present during the funeral.

Her sister-in-law responds to the UP police video that relatives were present during cremation.

Journalist Arvind Gunasekar wrote that the Uttar Pradesh government claimed that the victim’s ‘uncle’ performed her last rites. However, her parents maintained that they weren’t at the site.

UP Govt says this ‘uncle’ of the #Hathras victim did the last rites.

Her parents say they weren’t there at the site.

According to an NDTV report, “Amid spiralling outrage, the Hathras police claimed the cremation was carried out with the family’s consent and some members were present. It turned out to be one uncle – not her parents – who was called and shown the cremation.”

Initial reports from the ground do not support the UP police and state administration’s claim that the funeral was not conducted forcibly. Scenes from early hours of September 30 show a distraught family begging cops to let them take their deceased daughter home one last time.

Their pleas were met with coercion. Family members were locked inside their homes while the police formed a human chain around the funeral ground where the alleged rape victim’s body burnt without her parents in sight. A video of a frail elderly man tossing logs of wood in the pyre was used to claim that her family performed the last rites. The man, however, was not a part of the victim’s immediate family.