In Philippines’ War on Media, Maria Ressa 'Holds the Line'

The veteran war correspondent and CEO of online news portal 'Rappler' is among Time's '2018 Person of the Year'. “Independence is no small thing. It marks the distinction between tyranny and democracy,” writes Karl Vick in Time magazine on press freedom and why “The Guardians” – Jamal Khashoggi, the staff of Capital Gazette, Maria Ressa, Wa Lone and Kyaw Soe Oo – are Time‘s ‘2018 Person of the Year’.

Ressa, 55, a veteran war correspondent and the CEO of online news portal Rappler, is on the cover of Time for her outspoken criticism of Philippines President Rodrigo Duterte’s regime. Rappler has been a leading opponent of President Duterte’s “war on drugs” that has led to the extrajudicial killings of more than 12,000 people, according to the Human Rights Watch.

In November, Philippine authorities reported that they have grounds to indict Rappler and its co-founder Ressa on charges of tax evasion and failure to file returns. On December 11, she posted bail for four of these charges. Ressa could face up to ten years in prison.

The charges against Ressa, she says, are meant to threaten and intimidate her.

This is not the only uphill legal battle the news website is facing against the government. In January, the Securities and Exchange Commission (SEC) had ordered for the revocation of Rappler’s registration for violation of Philippine laws that bar any foreign ownership and control of local media. The Rappler continues to operate. Ressa has challenged the SEC’s accusations for giving the decision “without due process.”

Duterte has denied the involvement of his government in the Commission’s decision, according to local news reports. Nevertheless, a month after, he banned the website from covering any official presidential palace events.

Presidential spokesman Salvador Panelo, when questioned by reporters on Ressa’s recognition by Time, reportedly said: “That’s the call of the awarding organisation; it has its basis for awarding certain people.” 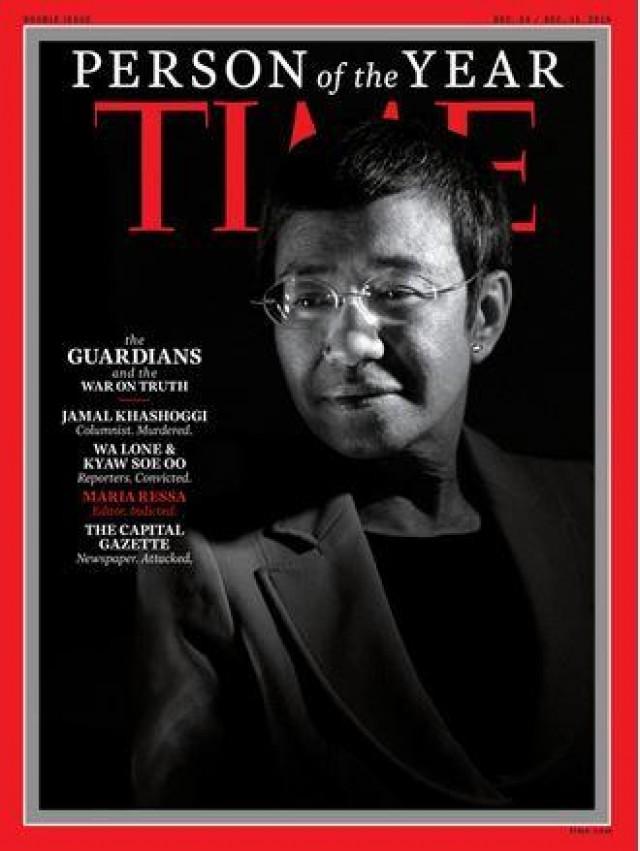 Maria Ressa is on the cover of Time for her outspoken criticism of President Duterte’s regime.

State of press freedom in the Philippines

Journalism has always been a dangerous job in the Philippines. A 2016 report by the International Federation of Journalists (IFJ) found it to be the second-most dangerous beat for reporters in the past 25 years. Only Iraq was higher on the list.

Few Filipinos have forgotten the Maguindanao massacre of 2009, where 32 journalists, along with 25 civilians were murdered by members of the Ampatuan clan, in what is considered the single-deadliest attack on journalists globally. While the key suspect of the massacre, Andal Ampatuan Sr., died in custody in 2015, the rest of the perpetrators remain on trial.

The Committee to Protect Journalists has listed the Philippines as fifth on its 2018 Global Impunity Index that ranks “states with the worst records of prosecuting the killers of journalists.” Since 1992, 78 journalists have been murdered in the Philippines. In 66 of these cases, the suspects were not prosecuted and the killers walked away with complete impunity.

In 2016, when questioned about the high number of attacks on journalists, Duterte said that they deserved it, reports BBC. “You won’t be killed if you don’t do anything wrong,” he said.

Also read: Time’s ‘Person of the Year’ Recognises the Global Assault on Journalism

Rappler is not the only press organisation targeted and vilified by the president. In an expletive-laden speech in April, Duterte threatened to block the renewal of the broadcasting franchise of ABS-CBN network, the largest media network of Philippines. He has also threatened the Philippine Daily Inquirer, a popular English newspaper, with tax evasion charges.

The critics of the government, including news organisations and political opponents, are hounded by trolls online. A 2017 study by the University of Oxford titled ‘Troops, Trolls and Troublemakers: A Global Inventory of Organized Social Media Manipulation’ found that President Duterte spent $200,000 (approximately 1 million Philippines pesos) to hire a staff of 400-500 trolls to spread propaganda and target opposition. In her recent speech for the 2018 Gwen Ifill Press Freedom award, Ressa called out not just the Philippine government but also Facebook for planting seeds of “violence, fear and lies that poison our democracy.”

In the Philippines, 97% of internet users have a Facebook account. This is possible due to free internet for selective sites offered under Facebook’s Internet.org programme. The use of social media to access news is rampant and so is the misuse of it to spread misinformation. The limited access to the internet under Internet.org means that the users cannot cross-verify the information they receive on Facebook.

Katie Harbath, Facebook’s Global Politics and Government Outreach director, has described the Philippines as “Patient Zero” in the fight against misinformation.

Cambridge Analytica improperly accessed Facebook accounts of an estimated 1.2 million Filipino users, reports Quartz. The second most compromised accounts during Cambridge Analytica breach were in the Philippines after the US. Cambridge Analytica, which ran both the campaign for Donald Trump and for Brexit, came under fire when news broke out in March that they had obtained the data of 84 million people without their consent and used it to further their political goals.

In response to criticism, Facebook has recently taken down almost 100 pages and accounts from its website for violating their span and authenticity policies. Some of them have been linked to Duterte. In comparison, it took down 30,000 pages of fake accounts for violating their policy before the France elections. 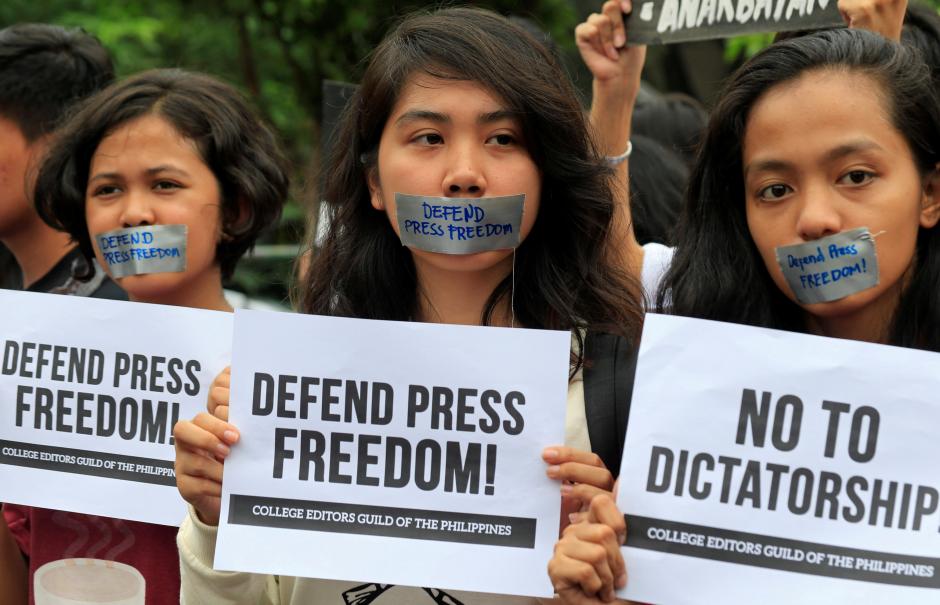 Members of the College Editors Guild of the Philippines hold placards during a protest outside the presidential palace in Metro Manila, Philippines January 17, 2018. Credit: Reuters/Romeo Ranoco

Since April, Rappler has been working with Facebook as a third-party fact checker in an official news verification programme to flag fake content, reports New York Times. However, many believe that these efforts are not enough and Ressa continues to stay critical of the social network.

Rappler was also founded on Facebook and the social network continues to be a major source of traffic for the news site. Some have even been critical of the role social media news sites like Rappler have played in providing a voice to Duterte. Tom Smith, a senior lecturer in International Relations at the University of Portsmouth, has called Rappler a “cautionary tale” for its initial favourable coverage of Duterte.

Also read: The Toughest Enemy of Press Freedom Is the One Within

“The Philippines needs its journalists to be sceptical and on constant guard,” writes Smith in The Diplomat. “Media outlets who curry favour with leaders can expect no guarantee that those leaders won’t turn on them in the end.”

It is a tough time to be a journalist. Earlier this year, the Washington Post concluded that 2017 was the most dangerous year ever for journalists and 2018 might be worse.

On December 12, Wa Lone and Kyaw Soe Oo, the Reuters reporters listed alongside Maria Ressa in Time magazine, finished the first year of their seven-year sentence in Myanmar. They are imprisoned for their exposure of the military involvement in the Rohingya massacre.

Jamal Khashoggi, a columnist for the Washington Post, disappeared in October after visiting the Saudi Arabian Embassy in Turkey. He was allegedly assassinated and dismembered in the embassy on the orders of the Saudi crown prince Mohammad bin Salman. Among the honorees is also the staff of The Capital Gazette, a newspaper in Maryland, who lost five team members in a mass shooting in June 2018.

Maria Ressa and Rappler’s problems have just begun – but she remains hopeful. Last month, during her acceptance of the 2018 Gwen Ifill Press Freedom award she said:

“We decided that when we look back at this moment a decade from now, we will feel that we did everything we could. We did not duck, and we did not hide. We are Rappler, and we will hold the line.”