'The press club should maybe look at their abysmally falling standards of members and the miserable state of the paid godi media before wasting time issuing statements against me,' said the TMC MP. Kolkata: The Kolkata Press Club has issued a statement condemning a comment made by Trinamool Congress MP Mahua Moitra on journalists. The latter has responded saying the Club should look at the “miserable state of godi media before wasting words” on her.

In a release written in Bengali, the Press Club wrote that it was “deeply concerned” and lodges a “strong protest” against comments made by the Krishnanagar MP.

While the press release did not mention what Moitra had said, local media has reported that she had called journalists who had gone to cover an internal meeting of the Trinamool, members of the “two paisa press”.

“In a democratic set up, the importance of journalism and the respect it commands is known to all. Journalists braving adverse situations as part of their professional struggle and social responsibility are respected by globally,” the statement says.

The press club has demanded that Moitra withdraw her comment and express regrets over it. 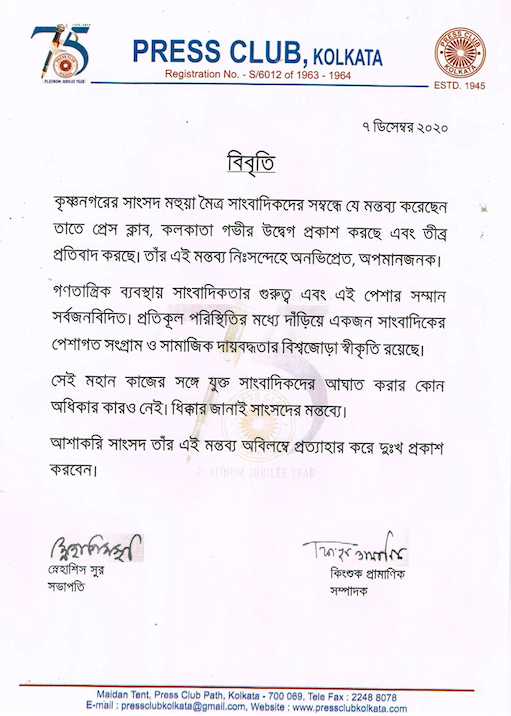 The Kolkata Press Club is headed by Doordarshan journalist Snehasis Sur and regional newspaper Sangbad Pratidin‘s Kinshuk Pramanik, who are the signatories to the release.

When contacted, Sur said the contents of the release were “self explanatory.”

Moitra has told The Wire that she was attending an internal party workers’ meeting at Gayeshpur. “Strictly no press was allowed in the meeting. One group [of the TMC] was against the town president of the area, so when I arrived, they broke into a commotion, saying ‘we cannot accept him, he is ignoring us.’ So I was trying to sort out the matter,” she said.

In the meantime, Moitra said that one of the two warring factions – in attempt to gain leverage – called local stringers to the area. They began to record the commotion with their phones. “I was disappointed with the workers, because while they can tell me anything, they cannot call the press to an internal meeting. So I told them, ‘Why do you call these ‘dui poeshar press‘ here’? Someone, at a distance, recorded it,” she said.

The MP said that while she stood by her words – and that the press did not belong at an internal meeting – the Press Club should not waste its time on a matter which was fomented by ‘bad elements’ in the party who had called the press for their gains.

“The press club should maybe look at their abysmally falling standards of members and the miserable state of the paid godi media before wasting time issuing statements against me,” she said.

The incident has been taken up with gusto by the Bengal chapter of the Bharatiya Janata Party, which tweeted a video in which Moitra is purportedly heard making the comment on a microphone.

Not long after the Club released the statement, BJP’s newly appointed West Bengal in-charge, Amit Malviya, also took to Twitter over this.

Repression of the press has been a recurring complaint in a number of states, run by both BJP and non-BJP governments. In West Bengal, the Mamata government has been frequently critical of journalists who have written against the government – with the chief minister often singling out channels and outlets in public meetings over unfavourable coverage.