BJP legislators and other rightwing leaders all tweeted photos of the Srisailam dam, claiming it was part of a project inaugurated in UP by PM Modi.

In a three-day visit from November 19 to 21, to Uttar Pradesh, Prime Minister Narendra Modi inaugurated and launched infrastructure projects worth more than Rs 6,000 crore in the Bundelkhand region.

I will be in Mahoba and Jhansi tomorrow, 19th November to inaugurate various development projects which will benefit the Bundelkhand region. This includes key projects relating to overcoming the problems of water shortage. https://t.co/uXZTysrhm3

On November 19, BJP MLA Dr Avadhesh Singh posted an image of a dam and claimed that Bundelkhand will get such irrigation projects. He wrote, “Bundelkhand which was traditionally used by politicians for their personal benefits is today witnessing a sea of change.” It’s worth noting the text over the dam’s image reads “Bundelkhand’s gift” (translated from बुंदेलखंड की सौगात).

Bundelkhand which was traditionally used by politicians for their personal benefits is today witnessing a sea of change. #बुलन्द_बुन्देलखण्ड pic.twitter.com/rddId0NV5n 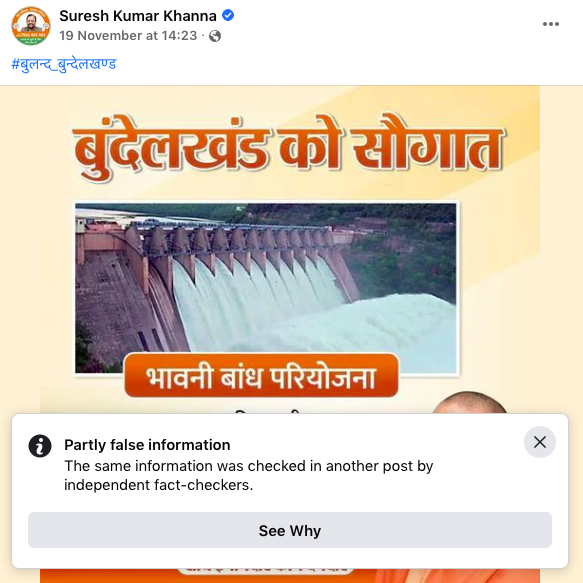 Alt News performed a reverse image search and found that the image in question was published by Deccan Chronicle in 2014. As per the report, the image shows the Srisailam Dam. This is constructed across the Krishna River in Nagarkurnool district in Telangana and Kurnool district in Andhra Pradesh.

The image shows the comparison between the viral image and the image in Deccan Chronicle. Both images are identical.

To sum it up, several BJP leaders posted a photo of Srisailam Dam and claimed that it is a gift for Bundelkhand.