Kishorechandra Wangkhem was taken into custody by the state police under the National Security Act (NSA) on November 26.

New Delhi: Imphal-based journalist Kishorechandra Wangkhem, who was taken into custody by the state police under the National Security Act (NSA) on November 26, has been sentenced to a 12-month jail term – the maximum period of detention allowed under the Act.

The advisory board of NSA, set up under Section 9 of the Act to look into the allegations brought by the state government against the journalist, met on December 11 and conducted hearings on the matter. On December 13, the board submitted its report to the authorities approving his detention under the NSA.

“After considering the proximate past activities of the [detainee] and potential danger of his activities which are prejudicial to the security of the state and maintenance of public order and there is apprehension of his continuing to act in [similarly] prejudicial activities, the moment he is released from detention, is further of the opinion that the said person should be detained for the maximum period of 12 months as provided under Section 13 of the said Act.”

On November 21, Kishorechandra, then working as an anchor-reporter with ISTV, a local news channel, was arrested by Imphal West Police in response to a video he uploaded on social media, criticising the BJP-led state government. In Meitei language, he severely condemned the state chief minister N. Biren Singh for organising a function to commemorate the fight of the Rani of Jhansi against the British and linking it to the freedom movement of Manipur.

He also reportedly used foul language against the BJP-led government and the ideological fount of the party, the RSS, besides challenging the state government to arrest him if it could for opposing the function.

He was arrested under sections 294 and 500 of the IPC in addition to section 124 A, which deals with sedition. However, on being produced before a local court on November 25, it released him on bail on the ground that his words were “a mere expression of opinion against the public conduct of a public figure in a street language.”

“It does not appear to me as an act which is intended to create enmity between different groups of people community, sections etc. nor does it appear to be one which attempts to bring hatred, contempt, dissatisfaction against the government of India or of the state. It is mere expression of opinion against the prime minister and chief minister of Manipur which cannot be equated with an attack to invite people to violence against the government of India or Manipur to topple it.”

However, Kishorechandra was re-arrested by the police and detained under the NSA. He has since been lodged at the central jail in Sajiwa, on the outskirts of Imphal. 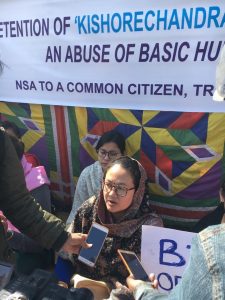 Kishorechandra’s wife Ranjita at the sit-in protest in Imphal on November 30 demanding her husband’s release from custody. Credit: Special arrangement

Meanwhile, Kishorechandra was sacked by ISTV for uploading the video. This August, the editor of the channel, Brojendro Ningombam, who is also the president of the Manipur Working Journalists Union, apologised to the chief minister for another social media post of Kishorechandra which spoke against his government. He was thereafter released from custody.

Speaking to The Wire from Imphal, Kishorechandra’s wife Ranjita Elangbam said, “We have appealed to the Union Home Ministry to reconsider the order two days ago and are awaiting a response. Hopefully, it should come in a day or two.” She said she hasn’t met her husband since his sentencing. “I have put in a request. As per the rules, he would be allowed to meet his family only after 15 days,” she said.

On December 17, members of the Manipur Students Association, Delhi and Manipur Muslim Students Union staged a protest in front of the Manipur Bhavan in Delhi opposing the detention of Kishorechandra. The Delhi police took into custody the presidents of both student unions along with other protesters and kept them under detention for a few hours. The All Manipur Students Union (AMSU), a powerful student body of the state, has issued a press statement in Imphal condemning the police action against the protesters.

The Indian Journalists Union and the Press Council of India condemned Kishorechandra’s detention and demanded his release.