While addressing the media in Kochi on November 7, Khan said he will not speak to reporters of 'Kairali News' and 'MediaOne'. 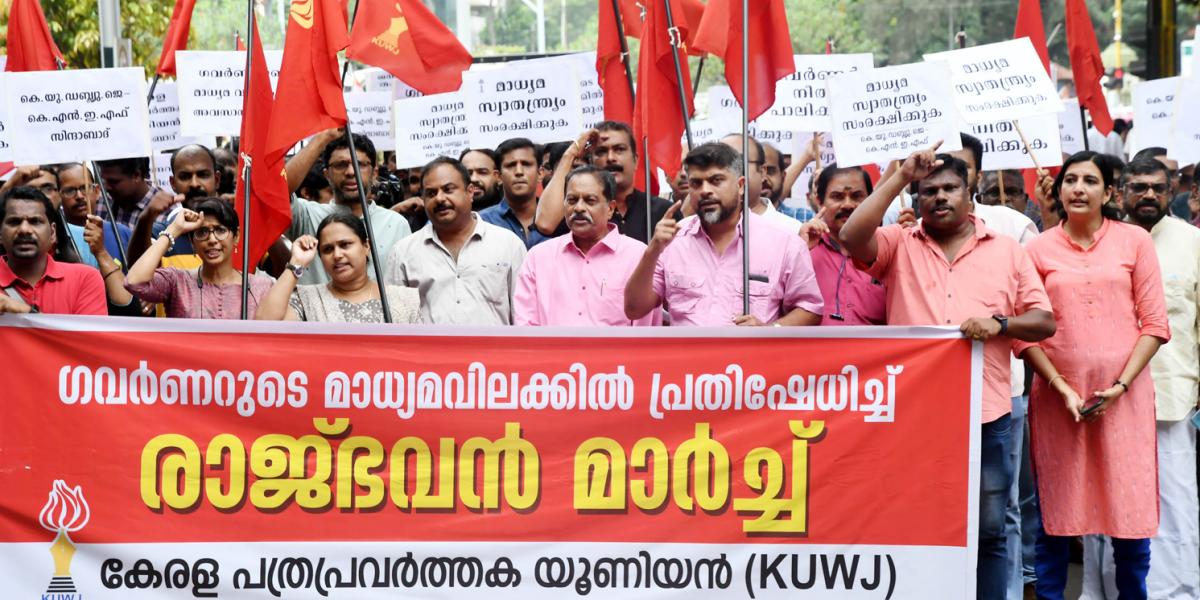 Thiruvananthapuram: Hundreds of journalists under the banner of the Kerala Union of Working Journalists marched to Raj Bhavan on Tuesday, November 8, in protest against governor Arif Mohammed Khan, who had humiliated and ousted some media persons from his press briefing.

The journalists demanded an apology from the governor, reminding him that they are “professional journalists” and not “cadres” of any political party – an allegation Khan repeatedly made against reporters of some news channels.

While addressing the media in Kochi on November 7, Khan targeted the reporters of Kairali News and MediaOne, two Malayalam news channels.

“I won’t talk to anybody from Kairali… I hope there’s no Kairali here. I hope there’s no MediaOne here. Is there any MediaOne [here]?” he said. Then he was seen shouting at a reporter from MediaOne, saying: “I don’t want to talk to you. Get out… Please go away.” 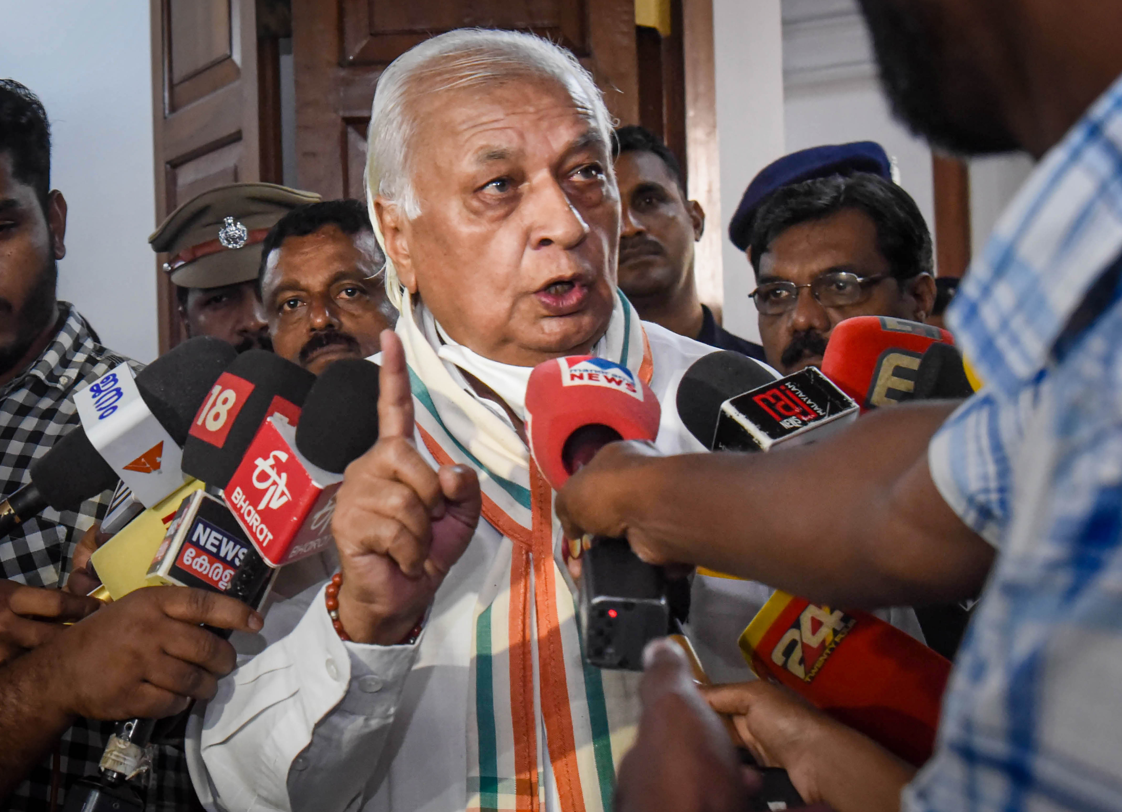 Umesh K.M. of Kairali News and Muhseena P.M. of MediaOne were asked to leave. They had come to attend the governor’s news briefing with an invitation.

While Karali News is owned by the Communist Party of India (Marxist), MediaOne is backed by Jamaat-e-Islami.

However, this is not the first time Khan has been criticised for his mistreatment of journalists.

On October 24, Khan called a press conference at Raj Bhavan but channels including Kairali, Reporter, Media One and Jaihind were not given permission to cover the same.

The journalists in their protest march raised slogans such as “We are not cadres, nor are we slaves,” “Both the government and Raj Bhavan are equal before us,” and “Governor, apologise; we want an apology”.

Speaking to The Wire, Vineetha M.V., president of the KUWJ, said, “The governor must apologise for humiliating the journalists.”

The ruling CPI(M) and the Opposition Congress also condemned Khan’s mistreatment of the journalists at a press meet.

Also read: Kerala HC Asks Governor Not to Take Any Action Against VCs Over Their Resignation

Some senior journalists told The Wire that Khan may have identified that these two channels are not in tune with the Sangh parivar‘s ideology, which is known for its trenchant support of the idea of a ‘Hindu Rashtra’.

In fact, many politicians in the state, including chief minister Pinarayi Vijayan, said that Khan is acting as a “Sangh parivar tool”.

Opposition leader V.D. Satheesan said that Khan’s behaviour at the press briefing was “embarrassing” and “undignified”.

“His behaviour doesn’t suit the office he holds… The governor should apologise to the journalists and correct himself,” he added.

Thomas Isaac, a veteran leader of the ruling CPI(M) and a former finance minister, said that Kerala is “united” in defending press freedom in the state, and against the governor’s rude behaviour towards the journalists.

He also called the governor’s behaviour “undignified”, adding that the state is “unfamiliar” with such mannerisms.

He said that Kerala gives a “greater importance to media freedom”, and hence, any attempt to throttle it, “not just by the governor but by any institution, including the government, is not acceptable here”.

‘Violation of the constitutional principles’

The Wire spoke to editors associated with MediaOne and Kairali News, who said that Khan’s mistreatment of the journalists was a violation of constitutional principles.

John Brittas, Rajya Sabha member and a former editor of Kairali News, said that Khan’s behaviour was a “blatant violation of the constitution”, and goes against the right to equality and freedom of expression.

Pramod Raman, the editor of MediaOne, also said that Khan’s behaviour is a violation of Articles 14 and 19(1)(a). He added that the governor humiliated “the entire journalist fraternity”.

Senior journalists said that some initiatives should be taken to strengthen the journalistic fraternity.

“There should be collective responses against the attempts to control and threaten journalists and the media. There should be new platforms beyond the KUWJ,” said Manila C. Mohan, a senior journalist and an editor based in Kozhikode.

“Our mainstream media formed a culture of competition within the media fraternity. This needs to change. The new political scenario demands a new response from the media and a new journalism culture,” she added.

Yaseen Ashraf, an editor and a media critic, said there can be a “set of guidelines” for journalists to follow when they have to deal with “such undignified behaviour by persons holding high offices”.

For John Brittas, “there should be a joint movement against such despotic acts of the governor”. He said he witnessed such a joint effort in the KUWJ’s Raj Bhavan march, as “there was a presence of all the major political parties in Kerala except the BJP”.

An attempt to implement the Sangh parivar’s agenda?

According to Mohan, Khan’s mishandling of journalists has more than one dimension.

She said that he is “trying to implement the Sangh parivar’s agenda” in Kerala – an allegation some other governors in non-BJP states like Tamil Nadu also face.

She said the governor hand-picked Kairali News and MediaOne because he may have seen these channels as “representatives” of communists and Muslims – the “enemies” of the Sangh parivar, she said.

As mentioned earlier, Karali News is owned by the CPI(M) and MediaOne is backed by Jamaat-e-Islami.

She, however, added that it will be difficult for the Sangh parivar to control the media in the state.

“In Kerala, the media is quite strong. The Sangh parivar has not yet succeeded in purchasing the media here, even though there may be individual journalists who may be Sangh sympathisers,” she said.

She also called for enhanced media scrutiny of divisive politics. “Kerala’s mainstream media shows no mercy when it criticises the state government. But I think the same vigour is missing while criticising and exposing the Sangh parivar/BJP government at the Centre or their divisive, dangerous policies,” she said.

Ashraf, too, warned journalists against the attempts to “import ‘Godi media’ culture” into Kerala, where there’s “a better atmosphere of media freedom” than in many other states.

Muhammed Sabith is a journalist and researcher. He tweets @MuhemmadSabith