In the current context, these debates serve the same purpose as gladiatorial contests in ancient Rome: promoting a violent spectacle of duelling parties to distract the public from serious policy failures. In prime-time TV news debates in Kerala, a scam surrounding a gold-smuggling case has usurped the COVID-19 pandemic to become the primary focus of public attention.

For over two weeks now, evening news debates have been centred around only one issue: the extent of the involvement of the chief minister’s office. The allegations aren’t entirely misplaced and cannot be dismissed, given that a key bureaucrat and a confidant of the chief minister maintained relations with at least two of the main accused persons. The level of involvement, however, remains uncertain.

Since the smuggling of contraband involved the consular offices of the UAE and the potential end-use in terrorism (both conventional and financial), the National Investigation Agency (NIA) has taken over the investigations.

Given the murky nature of the case – and the opposition’s desire to attack the state government at a time when its handling of the COVID-19 outbreak has drawn international praise – it was inevitable that the issue would come to dominate the evening news debates.

The familiar format, which lasts for an hour, features four or five speakers from the ruling CPI(M)-led LDF, Congress, BJP and another category called “political observers”. Unsurprisingly, attacks by the non-LDF speakers against the government take up most of the time. The one-hour format does not allow the LDF speakers more than ten minutes to respond. 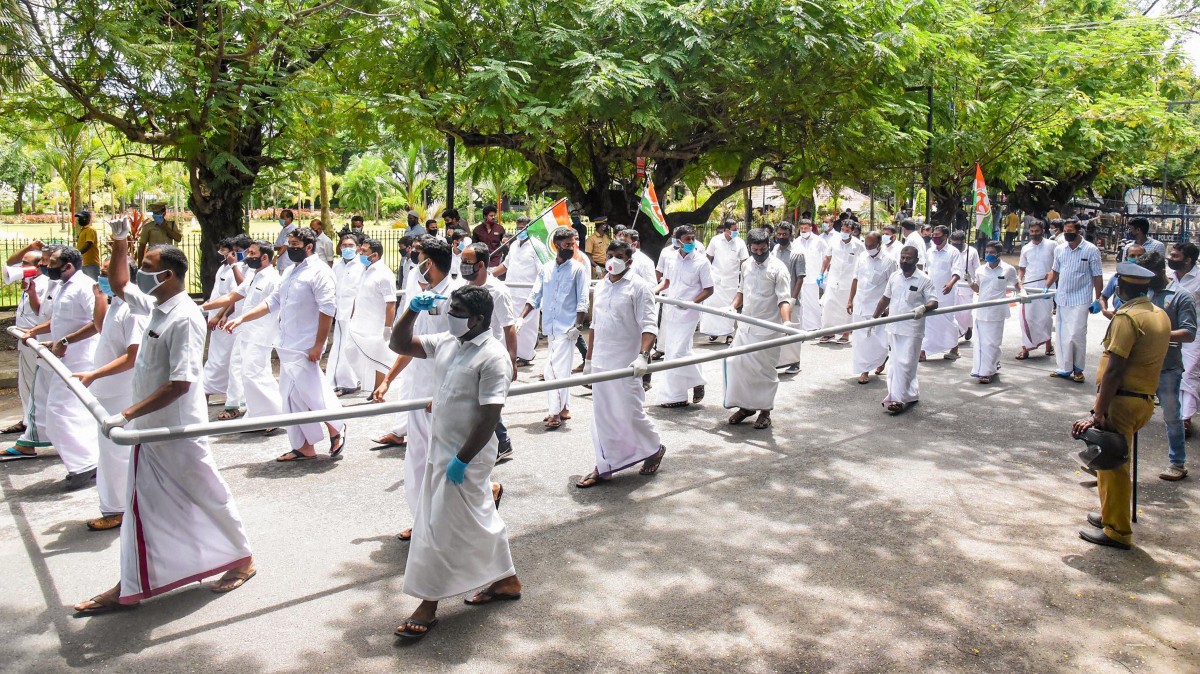 After two weeks of continuous engagement, the CPI(M) decided to boycott Asianet’s prime-time debate, which has the largest viewership in Kerala. The party said it was frustrated about not being given sufficient time to respond to the allegations. It argued that the viewers were being misled by presenting partisan individuals as neutral observers. In addition to the attacks from opposition spokespersons and observers, the news anchor also had his own monologues and interrupted government spokespersons when they attempted to respond while allowing opposition spokespersons unhindered speaking time.

For the time being, CPI(M) has chosen to continue participating in debates on other news channels including major channels like Manorama News and Mathrubhumi which are also aligned with anti-Left politics in the state. Thus, the boycott appears to be a tactical move to corner Asianet without giving the impression that the government has reasons to avoid any and all press scrutiny. In addition, the party has started putting out a series of videos on social media titled Satyanantaram (“post-truth”) to counter the mainstream media’s narrative.

Saving democracy or a business model?

Asianet’s chief editor, the widely-respected M.G. Radhakrishnan, responded to CPI(M)’s boycott by comparing it to the attacks on press freedom by right-wing populists – explicitly referring to Donald Trump, Jair Bolsonaro, and Recep Erdogan – and their preference for monologues through social media, where they are not questioned.

What Radhakrishnan ignored was the fact that for months, the chief minister had actually been giving hour-long press briefings on a daily basis where he fielded a host of unscripted questions from journalists. He turned a blind eye to the fact that CPI(M) spokespersons were present on rival channels, and also chose to defend the Asianet anchor’s belligerently partisan approach as normal in the contemporary debate format.

On closer examination, Radhakrishnan’s analogies and unwillingness to self-reflect seem to have been triggered less from a concern for democratic ideals and more from desperation to preserve a lucrative business model.

Television debates and cable news serve the same purpose that gladiatorial contests did in ancient Rome – a violent spectacle of two or more groups duelling that distracts the public from the serious shortcomings of rulers. Viewers remain glued to these debates hoping for the spokespersons representing their parties to deliver “killer arguments” that “demolish” opponents. A well-articulated insult or contempt for the opposition by the spokesperson helps reiterate their own choice of political affiliation. These negative emotions, particularly outrage, can be addictive which, for commercial TV channels, translate into high TRP ratings and advertising revenue.

Without a CPI(M) representative, Asianet’s debates fail to ignite fervour in rival spokespersons, the anchors, and the anti-Left viewers who yearn to see the ruling party’s spokesperson publicly mocked. They also risk repelling the substantial left-leaning viewership in Kerala.

This is a channel owned by the BJP MP Rajeev Chandrasekhar who has been quoted saying that he expects editors “to do what you have to do to get a large share of the market” even if that means maintaining a “leftist slant”. Radhakrishanan, who was brought in by Chandrashekhar, must only be too aware of these expectations.

Whether the CPI(M)’s boycott will make a dent in Asianet’s viewership is yet to be seen. The strategy seems to be working to the extent that anchors at Mathrubhumi and Manorama, who were equally disdainful, have become notably cautious with caustic remarks – one anchor apologised immediately after instinctively suggesting that the CPI(M) spokesperson is a regular “nuisance”. After all, none of the media houses can afford to ignore their commercial interests.

The episode should also bring into focus the futility of news debates for political communication or engagement with the press. The framing of news stories to provoke party spokespersons into delivering incendiary remarks, ad hominem attacks, misinformation and mockery against each other prevents a deeper analysis of serious issues. This also has serious consequences for society. It is wrongly assumed that public deliberations in any form are good for democracy. Political scientists have found that a certain kind of debate can lead to intractable polarisation, particularly when the groups are homogeneous. Individuals competing to signal deeper allegiance can push the group towards extreme positions that were not under consideration before the discussions began. The preferences of a group can also restrict the range of information and arguments that are considered for discussions. As a result, the discussions will progress only in the direction to which the majority of the group members were already inclined.

This means that debates which are framed for sensationalism – where the majority of time is spent on a single perspective (“CM must resign”) with blatantly partisan anchors who prevent alternative viewpoints from even being articulated – are bound to turn into echo chambers that move to the extremes.

Also read: For the Media to Regain Credibility, the Business of News Needs to Change

Individuals also engage in ‘motivated reasoning’ – a way of interpreting evidence such that their identities are not disturbed. Motivated reasoning is common irrespective of their position on the left-right spectrum of political affiliations. Furthermore, the source of corrections to worldviews also matters. Corrections made by sources that are seen as affiliated to antagonistic groups fail to make an impact on core supporters of a group.

TV debates are fabricated to fuel combativeness and antagonism between spokespersons and in turn to push the viewers, who are already divided into insular groups, further apart. Claims that such debates can ‘expose’ the lies of other political groups and transform public opinion are misplaced. Rather than strengthen democracy, these kinds of television debates widen social cleavages and serve anti-democratic political agendas.

All deliberations need not be detrimental of course. Discussions amongst participants who are sufficiently diverse and agree to debate with mutual respect and tether their argument to reason and evidence are even essential for democracy. Debates should become venues where citizens learn to oppose political adversaries without hating or fearing their existence. Social polarisation can be bridged if participants consciously choose to ‘argue to learn’ from each other, rather than ‘argue to win’. However, such standards are anathema to contemporary TV debates, which are designed to keep participants and viewers outraged and polarised.

There is an insightful story in the Panchatantra where a jackal eagerly licks up the blood that splattered from a fight between two goats. This proverbial jackal was not, however, guilty of making the goats fight each other. The same cannot be said of contemporary editors and anchors of commercial television news channels who script debate topics and then egg on confrontations between political spokespersons to ensure a steady flow of TRP-driven advertising revenue.

The contempt, hatred, and disdain for facts displayed by spokespersons in a debate is spilling over to societies and widening divisions within families, among friends, colleagues and neighbourhood associations. In effect, in their eagerness to ensure profits, these channels are creating television spectacles that pre-empt any form for solidarity needed to address the pressing issues of our time.

Also read: Frenzied Media Trials Are All About Audience Numbers

In this context, the CPI(M)’s decision to boycott is a reminder that gladiatorial television debates merely masquerade as public service and are not necessary – and indeed are inimical – for democracy. Other political parties, particularly those whose agendas are not premised on divisiveness and misinformation, should also consider avoiding such debates. Boycotting the format into oblivion can create space for reinstating democratic solidarity among citizens.

To be sure, political parties should be subjected to intense public scrutiny in a democracy. One-on-one unscripted conversations with incisive journalists, panel discussions and old-fashioned press meets can serve democracy without the spectacle of individuals in responsible positions going for each other’s jugular night after night.

Prabhir Vishnu Poruthiyil is a faculty member at the Centre for Policy Studies, Indian Institute of Technology, Bombay.