Kamran Yousuf said he was thrashed by more than six members of security forces near the site of a gunfight at Marwal village in southern Pulwama district. 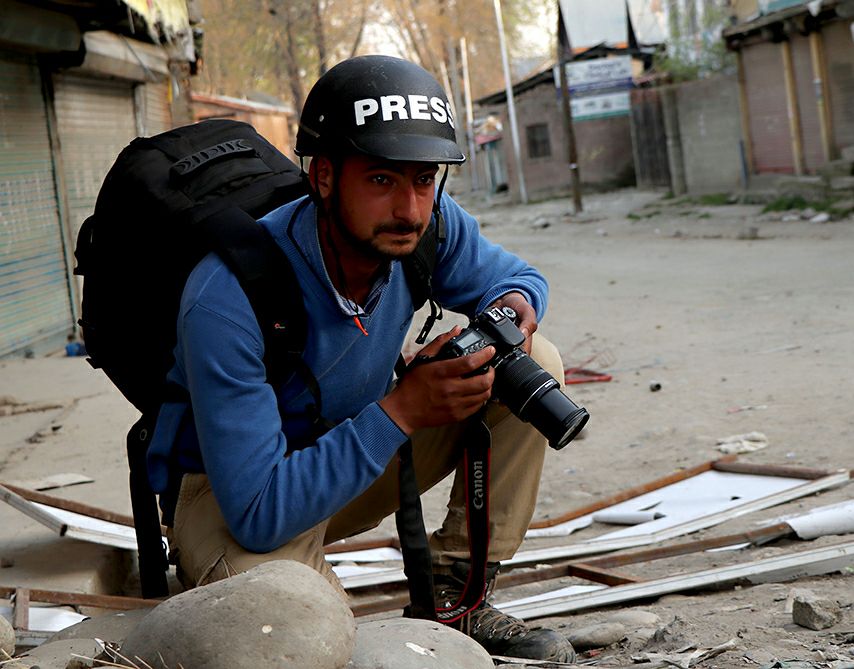 Srinagar: Police on Tuesday assaulted a photo journalist who had gone on site to cover an alleged gunfight between militants and security forces.

Kamran Yousuf who works with the Delhi-based website News Click said he was thrashed by more than six members of security forces near the site of a gunfight at Marwal village in southern Pulwama district.

Twenty-six-year-old Yousuf was hospitalised after the policemen, according to him, chased and thrashed him with bamboo sticks and butts of guns while he was beginning to take photographs of the area. With injuries on his right arm and leg, doctors Srinagar’s Shri Maharaja Hari Singh Hospital treated him for “assault and trauma” and discharged him in the afternoon.

The gunfight between suspected militants and security forces broke out in Marwal village of Pulwama early on Tuesday morning. Yousuf and a freelancer photojournalist, Faisal Bashir, were covering it and taking photographs along with other colleagues.

Speaking to The Wire, Yousuf said he was suddenly asked by CRPF personnel to leave the spot.

“Suddenly members of the security forces started pouncing on me,” said Yousuf. “I ran, they chased me and then began to beat me.”

“Luckily I ran away. It seemed as if they had come to kill me,” he said. “I wasn’t able to drive to the hospital on my own, my injuries were so bad. I had to call a colleague who took me for treatment.”

Yousuf said that he was over 200 metres away from the actual spot of the gunfight and outside the security perimeter. He had followed the proper security guidelines. “This is not the first time that I was covering an encounter,” he said.

Police while reacting to the incident, however, said that media personnel at the encounter were only “duly stopped by police.”

Pulwama police in a tweet said: “Today an exchange of fire took place at village Marwal between terrorists and SFs. Cordon was placed to prevent people from venturing inside as that would have endangered their security. However, some media persons tried to move close who were “duly stopped.”

Yousuf said police is lying about the incident and had targeted him deliberately. He told The Wire that the attack on him was without any provocation. “I was about to start clicking photos when police shouted at me and asked me to leave the site. I didn’t utter a word and tried to leave. But they stopped me and pounced on me,” he said.

The incident was condemned by the Kashmir Press Club (KPC), along with other journalists’ bodies and scribes based out of the valley.

In a statement, KPC urged J&K Lieutenant Governor, Manoj Sinha, to take a strong note of the incident.

The statement reads, “The club wants to make it clear that it is not the first incident where a journalist has been targeted by the forces and stopped from carrying their professional work. In the past, too many such incidents of harassment, thrashing and summons to media persons have been brought to the notice of the authorities at the highest level.”

It adds, “The club urges the authorities particularly the police to sanitise their ranks about respecting and upholding the press freedom in Kashmir.

In 2017, Yousuf was booked under the draconian Unlawful Activities Prevention Act (UAPA). He became the first journalist from the region to be booked under the controversial law. He was later released on bail after spending six months in Tihar Jail.

I was 22 years old when I was falsely implicated in 2017 and jailed for six months in Tihar. I was the first Kashmiri journalist, who was booked under draconian UAPA. My only fault was that I was doing my job professionally. pic.twitter.com/SwploOZyI0

In the charge sheet filed by the National Investigation Agency, Yousuf had been accused for “stone pelting and conspiracy as part of a larger Jammu and Kashmir terror funding case.” It had argued that he was not a bonafide journalist since he did not cover any developmental activities being carried out by the government forces. However, NIA failed to prove any evidence against him and he was released on bail.

The court, while detailing the reasons for granting him bail had said the prosecution had not “levelled any specific allegations against the accused/applicant that he has been a member of any particular banned organisation as per the First Schedule annexed to the UA(P)A.”

On Twitter, Yousuf wrote that he is still unaware as to why he was charged for the 2017 incident.

“I have never talked about my own suffering because I think my personal suffering and the cost that I have paid to be a professional photojournalist is very small when compared to what I bear witness every day of my life as a photojournalist,” he wrote.