Curtailing a major source of revenue for Kashmir newspapers seems to be the government's way of telling the media in the Valley: fall in line or be prepared to face the music. 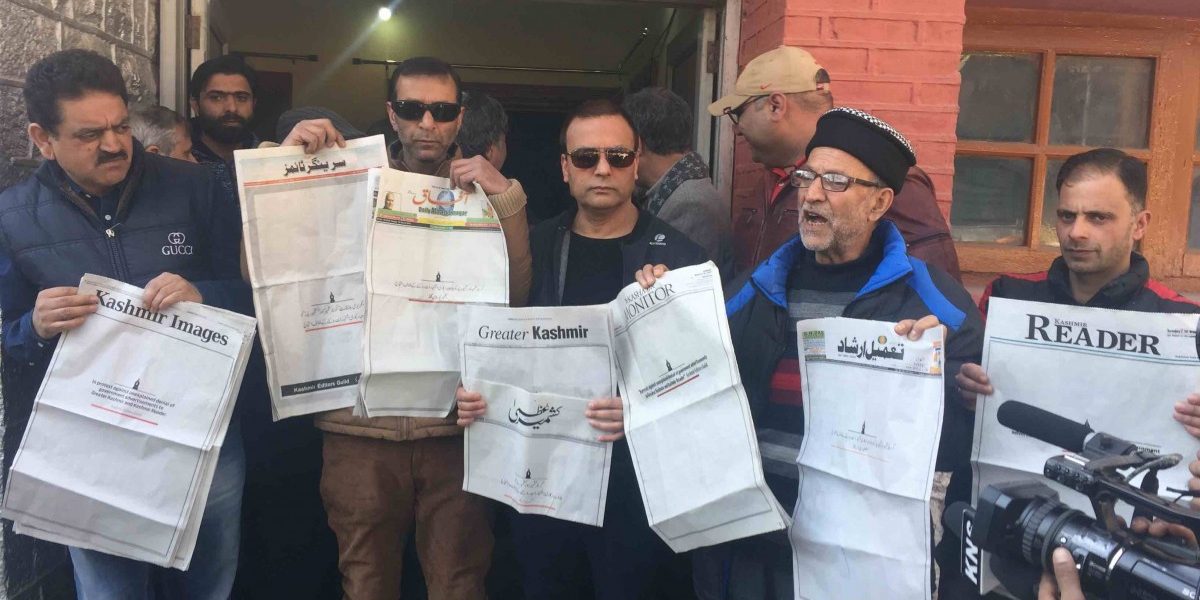 Srinagar: Kashmir newspapers – both English and Urdu ones – published blank front pages on Sunday with a clear message: “In protest against unexplained denial of government advertisements to Greater Kashmir and Kashmir Reader”.

Government action against the two dailies came on February 16, two days after the Pulwama attack that left over 40 CRPF personnel dead and several others injured.

The government, however, did not issue any formal order and the newspapers were on February 22 informed that the ban was imposed by “higher officials” without specifying anyone.

“The government did not send us a formal order. Whoever we contacted in the government said that it was an order from the “top”,” Haji Muhammad Hayat Bhat, founder and editor of Kashmir Reader said.

Due to the lack of a corporate sector in Kashmir, newspapers mostly rely on government advertisements ensuring a reasonable revenue to sustain the newspapers. The advertisements are released separately by the state government’s Department of Information and Public Relations (DIPR); and the Central government’s Directorate of Advertising and Visual Publicity (DAVP).

According to the DIPR, 368 newspapers and periodicals, including 201 in Jammu and 167 in Kashmir, are presently empanelled for the release of official advertisements. 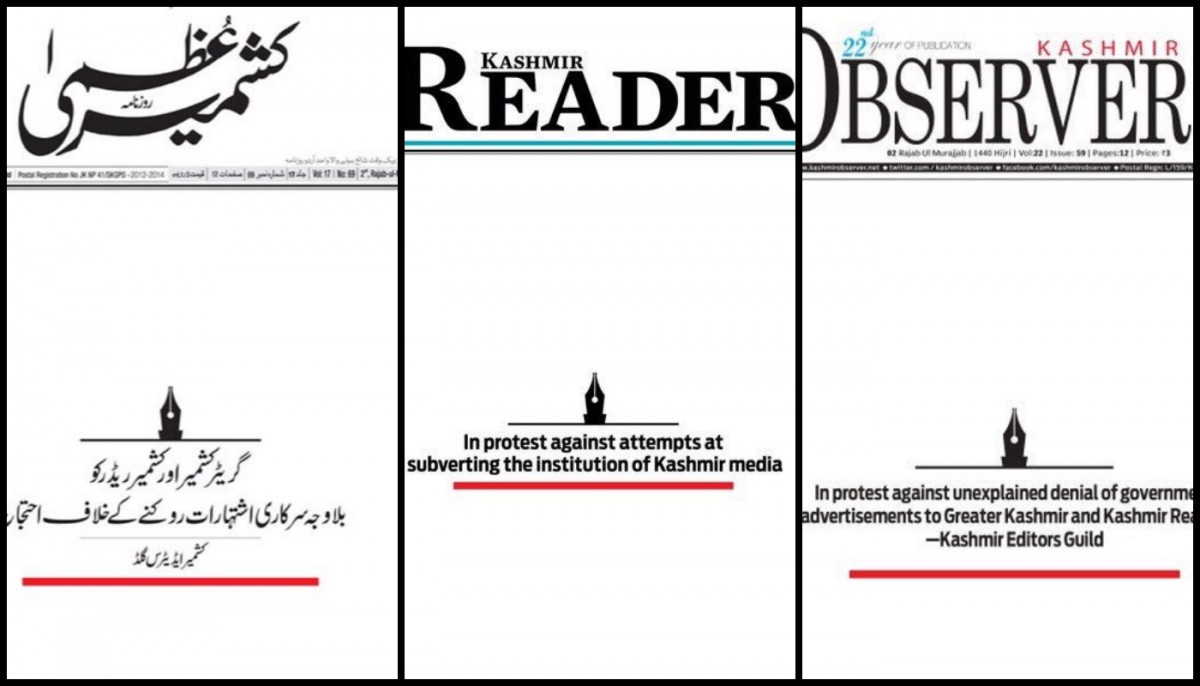 Owned by the Greater Kashmir Communications Private Limited, the former daily began publishing as a weekly newspaper in 1987 and moved to daily publishing in 1989. The newspaper has a circulation of over 1 lakh copies per day, Rashid Makhdoomi, printer and publisher of Greater Kashmir said.

Being the largest media house in Jammu and Kashmir, Greater Kashmir and its sister paper Daily Kashmir Uzma, that publishes in Urdu, employ around 500 people including editors, reporters, technical staff and other management.

Kashmir Reader is owned by businessman Haji Muhammad Hayat Bhat and it began publishing in May 2012.

The newspaper, Bhat said, has a staff strength of more than 100 people including reporters, technical staff and management. The circulation of the Reader varies between 8,000-10,000 copies per day.

Kashmiri Reader was banned post-Burhan Wani’s killing for around three months for being “critical of India” from October 2 to December 28.

Since the ban was lifted, Kashmir Reader has not received any advertisement from the Directorate of Advertising and Visual Publicity. The newspaper has been incurring a loss of around Rs 3-4 lakhs per month since.

Greater Kashmir, however, was briefly banned twice before 2016 from receiving DAVP ads. First in 2008 for around three months, then again in 2011 for little over a month, Makhdoomi said. All the three bans followed three bloody “summer unrests” in Kashmir – the 2008 Amarnath land row, the 2010 summer unrest and the 2016 summer unrest following militant commander Wani’s killing. The ad bans were imposed apparently over allegations of fanning “anti-India propaganda” in the Valley.

On February 27, 2017, The Indian Express reported an “assessment” report of Jammu and Kashmir by Central government on how to “manage Kashmir Valley narrative”.

As per the newspaper: “Control of the mosque, madrasa, print and TV media, changes in political atmosphere, strengthening of intelligence set-up and reaching out to the moderate faction of Hurriyat [Conference] were some of the suggestions in an assessment report prepared by the Centre.”

In December 2017, a report titled ‘Kashmir’s Media in Peril: A Situation Report’, prepared by the International Federation of Journalists, quoted the October 18, 2017 letter from the home ministry to senior officials of the state government and the Jammu and Kashmir police as saying:

“It is understood that some newspapers in J&K are publishing highly radicalised content ….. publishing of anti-national articles in the newspapers of the state should be strictly dealt with. Such newspapers should also not be given any patronage by way of advertisements by the state government.”

It added that at a meeting with the director of information, editors were told, “If you take government advertisements, we also expect something.”

Interestingly, the ban on advertisements to the two newspapers preceded a major crackdown on Kashmir’s largest socio-religous-political organisation Jama’at-e-Islami (JeI).

“In a classic case of shooting the messenger the state government is reported to have blocked Greater Kashmir newspaper group from any government advertisements. If true, I’m not sure what this move is meant to achieve other than to create a pliant, subservient media,” Abdullah said a day after the ban.

Other mainstream parties followed and sought an immediate release of advertisements to the two publications.

Journalist and political commentator, Gowhar Geelani said that curtailing advertisements or stopping them “is government’s way of telegraphing a message: ‘behave or face the music’.”

He said that the ban on the release of government advertisements is perceived as a “collective punishment” for the newspapers and the journalists for reporting from ground zero “impartially and fairly”.

Also read: How Free is the Media in the Kashmir Valley?

“It is perceived as punishment for reporting ground reality in a fair, impartial and balanced manner as journalistic ethics demand,” he said.

The noted commentator said that the state administration under “a very political” governor – Satya Pal Malik – is “stifling dissent and free speech”. “This is a brazen attack on the freedom of press,” Geelani said.

Observers believe the ban on ads is directly aimed at “scuttling” the press freedom in the conflict-ridden region and “choking” media institutions.

This is not the first time that the government has taken such an extreme step to “curtail press freedom in Kashmir”, journalists in the region said.

“The overall target is Kashmir story,” one senior journalist said. “There is already a different narrative being run from Delhi newsrooms and eventually [Kashmir] media becomes an easy target which we cannot see in isolation of the [2017] home ministry report,” he added.

Kashmir Editors Guild (KEG) – the body of Kashmiri editors formed after the 2016 ban on publication of newspapers – termed the advertisement ban “deliberate strangulation and subversion” of the institution of media in the state.

The Guild has sought the attention of the Press Council of India and the Editors Guild of India to exercise their legal, ethical and professional mandate to intervene in the issue and ensure that the media in one of the most sensitive states is not strangulated, a spokesperson of KEG said.

He said that the “attempts” at strangulating the media is in continuation of “what has happened” in last more than three decades.

On Sunday, the members of guild held a protest demonstration at Kashmir Press Club Srinagar. Bashir Manzar, the editor of the daily Kashmir Images said that the ban is against the principles of democracy. “For the last 15 days, the guild has been repeatedly asking the government to convey them the reasons for stopping the ads to the two dailies. However, the government, till date, has not bothered to revert.”

The ban will impose a monthly loss of around Rs 15 lakhs on Greater Kashmir, Makhdoomi said. “It is huge and will have telling consequences on the functioning of the organisation,” he said. Since the 2016 ban from DAVP, the paper has approximately incurred losses of more than Rs 10 lakhs per month.

The stopping of advertisements is not only an “intimidation” tactic but it will consequently affect operations of the news organisations.

“It will adversely impact newspaper revenue, which, in turn, will affect employees and staff members who make their ends meet with difficulty for media organisations in Kashmir are not good paymasters anyway,” Geelani observed.

Mir Hilal, the executive editor of Greater Kashmir, said that the ban on government advertisements will have two implications.

First, he said, the financial health of newspapers will be affected – which has the potential to hit other operations. Second, Mir believes, will be an impact “on press freedom because this ad gag is aimed at coercing media”.

Insiders in Greater Kashmir said that the organisation is now mulling slashing salaries of its staffers by 40%. “Some staff may also be asked to lay off,” they said.

Makhdoomi said although the ban on the state government advertisements will have a huge impact on Great Kashmir, he noted that the organisation is one of the largest commercial companies in the state and therefore, will “run the show” for some time. However, if the ban continues, “We will have to think of different options including laying off staff,” Makhdoomi said.

Bhat also echoed Makhdoomi’s statement. The loss of advertising revenue would have “immense financial implications”, however, “the newspaper with the help of private ads and other commercial activities would run for now”.

“We are always prepared for such unfortunate things to happen. As such we have our plans and will hopefully sustain the running of the newspaper till the ads are restored.”  Kashmir Reader pays salaries of around Rs 12 lakhs per month and the overall expenses are around Rs 18 lakhs per month.

Bhat said that if the ban continues, the organisation will have to weigh its options. “We will have to curtail the expenses and unfortunately we may be forced to take some extreme steps.”

The news organisations have written representation to the state government, asking it to explain the reasons why the advertisements were stopped. But it has not responded till date, Bhat said.

Another reporter working with Kashmir Reader said that the two newspapers employ around 600 people. The government should think about it and the impact it will have. The ban has deprived the two publications of revenue and will hurt the state and status of journalism in Kashmir, he said.