“I was put in lock up. They forced me to take off my clothes, and then they urinated on me.” 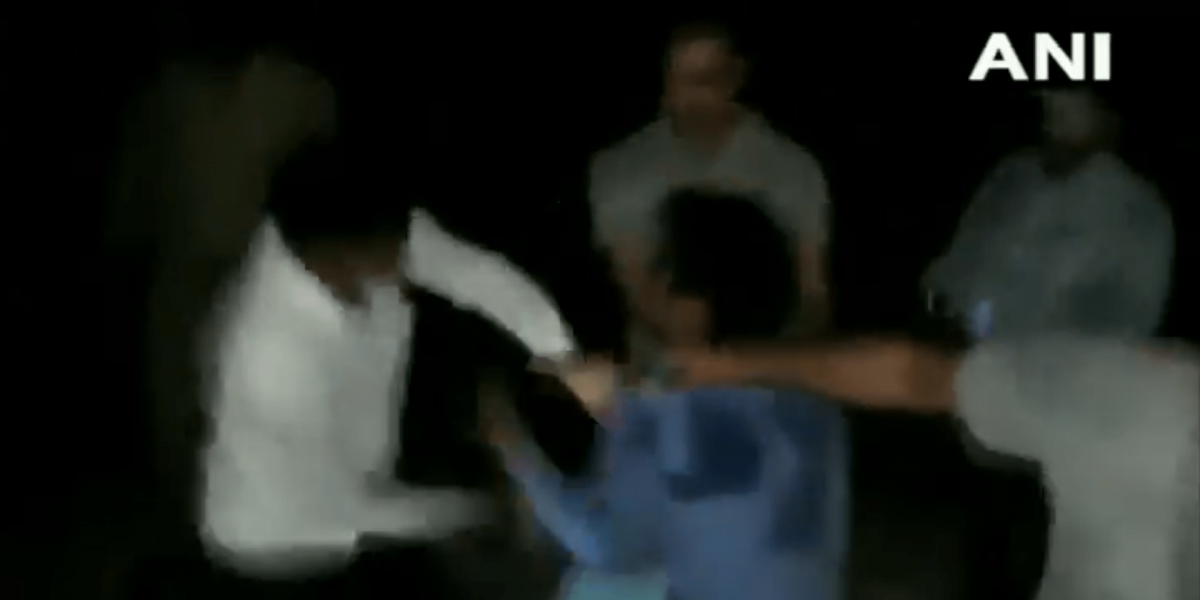 A grab of the video which went viral on social media. Photo: ANI/Twitter

New Delhi: In a continuation of a series of attacks on journalists, while Hindi television channel News24 journalist Amit Sharma was covering the derailment of a goods train near Shamli on Tuesday night, he was allegedly dragged to the GRP police station and stripped and harassed, reports said.

Two railway policemen – inspector Rakesh Kumar and constable Sanjay Pawar – have been suspended over the incident by GRP Superintendent of Police, Moradabad, Subhash Chandra Dubey . He has also sought a detailed report within 24 hours.

We have come across a video where a journalist has been beaten up & put up in a lock up. DGP UP OP Singh has ordered for immediate suspension of SHO GRP Shamli Rakesh Kumar & Const. Sanjay Pawar.
Strict punishment shall be accorded to policemen misbehaving with citizens.

In a video of the incident which went viral on social media late last night, the accused GRP personnel, dressed in plain clothes, can be seen repeatedly slapping and punching Sharma. Subsequently, the GRP personnel detained him.

Sharma later released a video, narrating the incident, PTI reported. “GRP and railway officials were at the spot when I had gone for the coverage. The GRP personnel along with other cops beat me up. The mobile phone, which I used for shooting the news clip is missing. They also hurled abuses at me,”he said.

“I was put in lock up. They forced me to take off my clothes, and then they urinated on me.”

#WATCH Shamli: GRP personnel thrash a journalist who was covering the goods train derailment near Dhimanpura tonight. He says, “They were in plain clothes. One hit my camera&it fell down. When I picked it up they hit&abused me. I was locked up, stripped&they urinated in my mouth” pic.twitter.com/nS4hiyFF1G

“The incident took place when the journalist had gone to cover the derailment of a few bogies of a goods trains in Shamli. There was a heated exchange of words among them and hurling of abuses,” said Ram Lakhan Mishra, the Circle Officer, GRP, Saharanpur. Mishra denied the allegations levelled by the journalist.

The News 24 journalist, locked up in the GRP station, can be heard narrating the ordeal. He dubbed the attack as a retaliation for a negative story. Accused inspector/SHO Rakesh Kumar sat on chair and kept confronting other journalists protesting against the incident. pic.twitter.com/dVSPrGKog7

The attack on Sharma comes exactly a day after the Supreme Court ordered the release of journalist Prashant Kanojia who was arrested for Twitter posts about UP chief minister Yogi Adityanath.

The train accident took place near Dhimanpura in Shamli when two wagons of a goods train derailed around Tuesday. There were no casualties.

Many took to social media to condemn the incident, including senior Congress leader Kapil Sibal.

Journalist Amit Sharma abused , then thrashed by railway cops and finally urinated in his mouth for covering the train derailment at Shamli (UP) .

Enforcers of the law are its biggest violators !