'Agencies do their own work, we don't interfere in their functioning,' newly placed I&B minister Anurag Thakur said.

A photograph tweeted by ANI from outside Dainik Bhaskar's Bhopal office. Photo: Twitter/@ANI

Separate searches are also on at premises owned by Lucknow-based Bharat Samachar television channel and its editor, Brajesh Misra.

Searches are being carried out at multiple locations by multiple teams, including the Dainik Bhaskar newspaper’s promoters’ residences and offices, news agency ANI has reported.

Thirty raid locations are spread across Madhya Pradesh (Bhopal and Indore), Rajasthan’s Jaipur and Gujarat’s Ahmedabad, according to a senior editor of the paper, who spoke to NDTV. At least 100 IT department officials were deployed.

“Agencies do their own work, we don’t interfere in their functioning. I would also like to say that facts need to be found before reporting about any incident. Sometimes lack of information is misleading,” Anurag Thakur, I&B and Youth Affairs and Sports, reportedly told the media at a cabinet briefing.

Later in the afternoon, Dainik Bhaskar reported that the IT team has raided the homes of many employees, confiscated mobiles of employees present in the offices and barred them from going out. “Night shift workers have also been barred from leaving the office,” the report in Hindi said.

Madhya Pradesh Congress leader Digvijaya Singh also tweeted that raids were on in “half a dozen” locations, including at Bhopal’s Press Complex.

The former chief minister also tweeted that this was a “vindictive” act and an example of Prime Minister Narendra Modi’s “Gujarat” governance model.

By indulging in such actions and gagging media, the Modi government wants to convey the message that if the media doesn’t become Godi-Media then it’s voice will be suppressed.

This is the second time in recent months that a news outlet has been raided over government claims of economic offences. In February, the Enforcement Directorate raided the residences of several officials and journalists associated with NewsClick.in, an independent media portal based in Delhi for several days. The Delhi high court in early July granted its editor-in-chief extension on protection from arrest.

Headquartered in Madhya Pradesh’s Bhopal, Dainik Bhaskar is among the most circulated Hindi dailies in the country.

In the last few months, Dainik Bhaskar‘s editions had focused on in-depth coverage of the pandemic, bringing the everyday issues that the second wave brought, out in the forefront.

A report on Dainik Bhaskar‘s coverage on Newslaundry points out that the paper had been indefatigable in highlighting aspects of COVID-19 mismanagement that the governments at the Union and in states did not want known.

Their coverage recently tackled the avowed cluelessness displayed by governments by publishing the number of the state BJP chief, C.R. Patil, who claimed to possess a stash of remdesivir when the injection was scarce. When Gujarat chief minister Vijay Rupani was asked about it, he had reportedly asked reporters to ask Patil, thus paving the way for the newspaper to run a headline with Patil’s number so people could do just that. 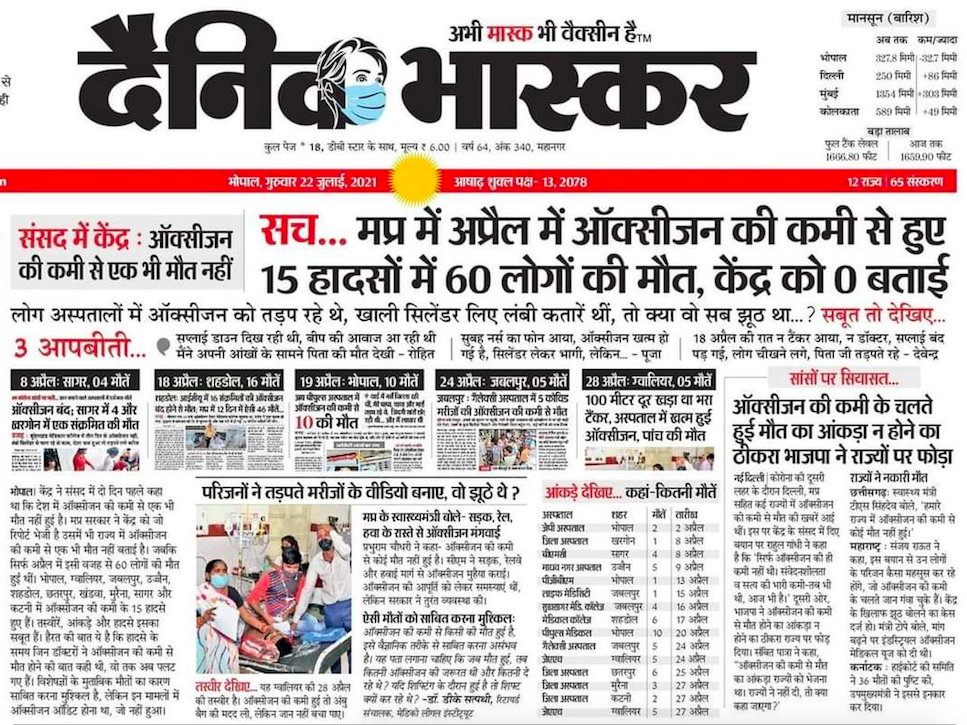 Today’s frontpage of the Dainik Bhaskar, focusing on lack of government acknowledgment on the true extent of the COVID-19 crisis.

Om Gaur, one of the editors of the paper, had also written an op-ed on the New York Times, headlined ‘The Ganges Is Returning the Dead. It Does Not Lie.’

The paper has also been one of the few Hindi dailies to maintain coverage as The Wire, along with 16 other media partners, releases reports of possible and successful surveillance on politicians, journalists, activists and others with the use of the Pegasus spyware which is sold to government clients by the Israeli NSO Group. A report by The Wire on coverage of the findings of the Pegasus project had noted that regional newspapers have been more enthusiastic about explaining the Pegasus software to their readers with the help of infographics, unlike some national and business dailies which preferred to put the story on the back pages.

Several participants on social media have drawn the parallel between Dainik Bhaskar‘s fearless coverage and the raids now.

These are the front pages of @DainikBhaskar for the past few days. They have asked tough questions on #PegasusSnoopgate and fact-checked deaths by #OxygenShortage. And today they are facing Income Tax raids.#DainikBhaskar #RAID #JournalismIsNotACrime pic.twitter.com/mV5mv9hXAF

the price of honest journalism can be a tax raid. a phone tap, jail or worse.
the price of sucking up is photo-ops. @DainikBhaskar – thank you for not forgetting the dead of India. 🙏

Income Tax raids @brajeshlive @bstvlive @Virendrauptv as well as @DainikBhaskar are shameful and vindictive ,this faceless intimidation has revealed the extent of harassment by the government to suppress the truth

Note: This is a breaking story and will be updated as more details come in.