The apology goes against the standard disclaimer issued by 'Indian Express' which impresses upon advertisers that the paper 'shall in no way be responsible for advertisement or its content.' 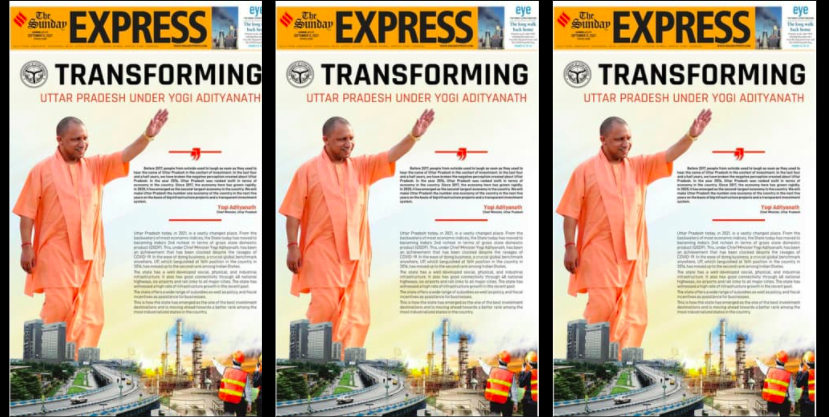 New Delhi: After participants on social media claimed that a front-page advertisement of the Adityanath government of Uttar Pradesh features as among its three key images, a flyover in Kolkata, the Indian Express – where the ad ran – has ended up apologising for the image selection.

Such an apology by a newspaper over an image in an ad is rare, as the contents of an advertisement are supplied by the advertiser.

A wrong image was inadvertently included in the cover collage of the advertorial on Uttar Pradesh produced by the marketing department of the newspaper. The error is deeply regretted and the image has been removed in all digital editions of the paper.

In fact, in its 2019 rate card (page 10) Indian Express impresses upon advertisers that “we [Express] shall in no way be responsible for advertisement or its content.” The whole disclaimer reads:

“Advertiser represents that the information in the advertisement is correct, current and complete and that nothing therein is false; and that any picture, logo, text, etc used in the advertisement does not infringe the intellectual property or privacy of a third party; contains nothing indecent or pornographic or defamatory. That we shall in no way be responsible for advertisement or its content.”

The highlighted portion of the Indian Express rate card reflects the relevant part on advertisement content.

The Adityanath government ran a three-page advertisement on the first pages of The Sunday Express, the weekend paper of the Indian Express on September 12. While the pages inside contained claims on the government’s various policies, the first page features a cut-out photograph of chief minister Adityanath, engineers at a factory and what appears to be the Maa Flyover in eastern Kolkata.

Hawk-eyed readers pointed out that the bridge had the iconic yellow taxi which is salient to Kolkata and was thus a giveaway.

Dear @IndianExpress, I think that iconic taxi along with some infrastructure belongs to Kolkata? 😁 pic.twitter.com/K0MgUNfajp

Claims have also been made on social media that the factory in the photograph is one in the US.

However, the Kolkata flyover goof-up has received most traction – largely because leaders of the Trinamool Congress, which is in power in West Bengal and is opposed to the Bharatiya Janata Party – have taken up the matter with gusto.

Thuggy Yogi in his UP ads with Kolkata’s MAA flyover, our JW Marriott & our iconic yellow taxis!

Change your soul or at least your ad agency Gudduji!

P.S. Looking forward to FIRs against me in Noida now 🙂 pic.twitter.com/I7TRUMvCjO

Amidst, TMC chief and Bengal chief minister Mamata Banerjee’s attempts to go national ahead of the 2024 general election, some have pointed out in jest how the BJP needs to look to Bengal to “transform” Uttar Pradesh.

Dear @myogiadityanath ji,whoever approved these images,please do tell them the flyover appears to be from Kolkata-the Maa Flyover.I can also spot a yellow taxi. And those tall buildings are the JW Marriot,also in Kolkata and by the same flyover if I am not mistaken😃 @manishndtv pic.twitter.com/POum6H7y4N

A respected former colleague has pointed out that this looks suspiciously like Kolkata’s Maa flyover! There is a yellow cab on the road. Can someone corroborate this ? pic.twitter.com/tJQxy7rTJh

Sanjay Singh who heads the Uttar Pradesh wing of the Aam Aadmi Party, which is also opposed to the BJP, took to Twitter as well.

A large section of Twitter saw in the incident the potential for a meme-fest.

My hometown in UP at night 😍 pic.twitter.com/hT2F9j5Zc3

Which UP city is this? pic.twitter.com/VdjtvijI45

Bridge over the river Gomti, developed by the transformational government of Yogi Adityanath in Uttar Pradesh. pic.twitter.com/xlqOcw7xZP