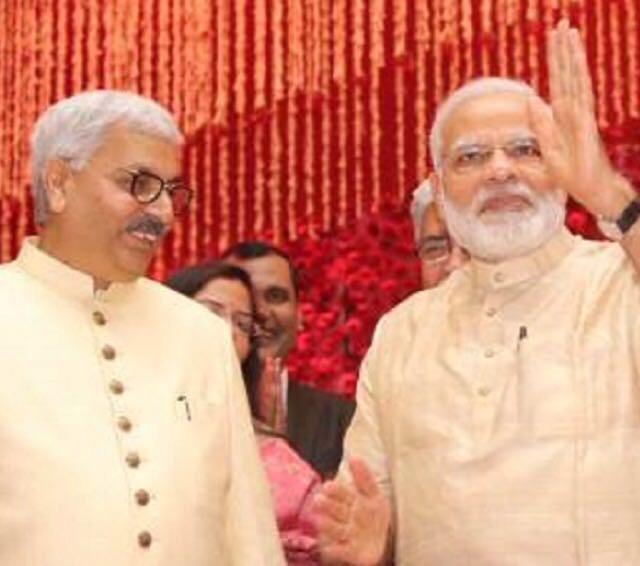 Hemant Sharma (left) with Narendra Modi at the wedding reception for Sharma's son in June 2017.

New Delhi: Admitting that the decision of a senior journalist to quit his job at India TV earlier this month was linked to a bribery scandal involving medical colleges and government officials, the channel’s promoter and editor-in-chief Rajat Sharma told The Wire that he had asked his colleague – India TV’s director of news, Hemant Sharma – to go because of the channel’s “zero tolerance towards allegations of corruption”.

The Wire had earlier reported how the CBI had stumbled upon the racket while tracking the calls of certain management officials of medical colleges that had been debarred by the Supreme Court from admitting any students because of sub-standard facilities. Investigations subsequently revealed that the colleges were “trying to obtain favourable orders from the government officials” through a network of middlemen who were in touch with “unknown public servants”. Earlier this month, four men were charged by the CBI for their involvement and three of them were formally arrested.

During the course of their investigation, the CBI’s officers are said to have been told by some of the accused that they were in touch with a senior journalist from a Hindi news channel who had close links with top health ministry functionaries.

Though the name of Hemant Sharma was not mentioned in the FIR, sources had stated that his name had figured in the questioning of the accused persons. When his employer, India TV, learnt of these developments, it asked him to make an honourable exit for the sake of channel with which he had been associated for a long time, Rajat Sharma said.

While Rajat Sharma and India TV are considered close to the current political establishment, Hemant Sharma too has been associated with top BJP leaders, including Prime Minister Narendra Modi and party president Amit Shah. Hemant Sharma is credited with helping Modi select Varanasi as the constituency in Uttar Pradesh from which to fight the 2014 election. He is also believed to be close to Samajawadi party leader Mulayam Singh Yadav.

Speaking to The Wire, Rajat Sharma said: “My stand is very clear. Everyone who works with me at India TV is aware of what are my principles and my stand on corruption. Also, everyone in this organisation knows that I have zero tolerance for any accusations of wrong doing against any member of my team. Hemant had a very long association with my organisation and he respected my stand.”

Incidentally, while announcing Hemant’s resignation from the organisation, India TV had stated that he had decided to take a sabbatical from his career. Rajat Sharma was quoted as saying: “Hemant has had a long journey with India TV and our best wishes are with him, always”.

Hemant Sharma, for his part, had claimed: “I have decided to take a sabbatical from my long career for my first love of writing, but I will always be available to India TV.”

The Wire has tried to reach Hemant Sharma for his response to Rajat Sharma’s comments, even delaying the story for a week in order to ensure his side of the story, but messages and phone calls to his number have gone unacknowledged and unanswered.

Though the CBI did not question anyone at India TV about Hemant Sharma’s connection with the case and has also not spoken publicly about this aspect of its investigations, it is not clear on what basis the channel decided to act against him.

A case was registered by the CBI on August 3, 2017 for criminal conspiracy and taking and offering illegal gratification by corrupt and illegal means to influence public servants.

According to the CBI, two of the accused, Narender Singh and Kunwar Nishant Singh, were managing the affairs of the World College of Medical Sciences in Jhajjar, Haryana – one of the colleges barred by the government from admitting medical students because they were providing “substandard facilities” or because there was “non-fulfilment of the required quota”.

The ministry had first barred 23 medical colleges for not abiding by the standards set by the Medical Council of India. Subsequently, it had in July this year banned 32 private medical colleges from admitting students for two years.

However, the CBI probe has shown that the action against the medical colleges probably provided a perfect way for some top functionaries and middlemen to make money on the sly, while the ministry gave the impression that it was out to clean and streamline the system.

Accused were in touch with ‘unknown public servants’

The CBI said the two had been pursuing the matter through regular meetings in New Delhi and that 23 colleges had also challenged the debarment in the Supreme Court. However, as the apex court had directed the government to consider afresh the materials on record, quoting sources the CBI information stated that “the above mentioned persons have been trying to get the orders of debarment overturned through the ministry and in this regard have been contacting various persons who have assured them of helping them in this regard in lieu of huge illegal gratification for the concerned unknown public servants”.

About the other persons, Vaibhav Sharma and V.K. Sharma, both residents of Sector 44, Noida and not directly linked to the medical colleges in question, who have also been named as accused in the FIR, the CBI stated that the Singhs were in touch with the Sharmas, “who further through their close contacts are claiming proximity with the senior functionaries of the Ministry of Health and Family Welfare and have given assurance to the college management for assistance in getting favourable orders.”

Noting that “however, huge illegal gratification has been demanded by them in this regard”, the CBI stated that the four accused were trying to obtain favourable orders from the government officials. The agency, quoting a “source”, also stated that “the illegal gratification was likely to be delivered to Vaibhav Sharma and V.K. Sharma for influencing and inducing senior functionaries of the Ministry of Health and Family Welfare by corrupt or illegal means through their contacts”.