The journalists condemned the communication clampdown, saying it was a deliberate attempt to stop the flow of information from Kashmir to the outside world and “suppress  freedom of media in Kashmir”.

Srinagar: Journalists from the Valley staged a silent demonstration in Srinagar on Thursday to protest the ongoing communication blockade in Kashmir.

Holding placards and wearing black bands, scores of journalist working with different media organisations assembled inside the premises of Kashmir Press Club, demanding an end to the restrictions on internet and mobile services in the Valley.

“Stop criminalising journalism, rescues us from sub-jail what you call MFC (media facilitation centre), allow journalists to work freely in Kashmir, we are journalists not mouthpieces,” read some of the placards.

The protest comes after several demands to restore the internet facility and mobile phones for journalists failed. The Kashmir Press Club, an elected body of journalists in Kashmir, had taken up the issue with the state government and asked that the internet gag on newspaper houses end and that mobile facilities be restored for journalists.

On Wednesday, several journalist associations met at the club and took the decision to hold the protest. 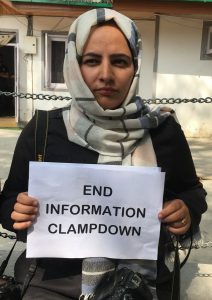 “We have assembled here to highlight our plight,” said senior journalist Naseer A. Ganai. “In the absence of internet and mobile facilities, these two months have been very difficult for us to report the situation in Kashmir.”

The journalists condemned the communication clampdown, saying it was a deliberate attempt to stop the flow of information from Kashmir to the outside world and “suppress  freedom of media in Kashmir”.

The gag has drastically affected media operations in the Valley. Most newspapers published from Srinagar have slashed their page numbers and none have been able to update their online editions since August 4. Journalists stationed in different districts across Kashmir have been rendered jobless since the imposition of the communication gag.

New Delhi scrapped Article 370 of the Indian constitution and bifurcated the state into two union territories on August 5. The move stripped J&K of its separate flag and constitution. Fearing reprisals, the authorities imposed strict restrictions and a communication blockade across the Valley. Though restrictions were eased last month, the communication blockade is still in force.

Facing criticism, the government set up a make-shift media communication centre at a private hotel in Srinagar for journalists.

The centre has one internet connection and nine terminals where journalists working with international, national and local media houses have to wait in a queue for their turn to send reports and check mails.

The information department managing the centre has allotted 15 minutes for each journalist to access the internet.

“This (communication gag) is a deliberate attempt to control flow of information from J&K. The setting up of media centre is aimed at censoring journalists because it takes more time to file a story while waiting in a queue than collects facts from the ground,” said senior journalist Peerzada Ashiq. “The time you can spend on the ground is wasted at the centre in long queues.”

On Thursday, Kashmir completed two months under communication blockade. But officials are tight-lipped over  the restoration of services in Kashmir.

In his last press conference on September 12, government spokesperson Rohit Kansal justified the ban, saying there were fears Pakistan might be exploiting the facilities to create disturbance in the Valley.

“This too shall pass,” he said, in response to a question about when the ban will be lifted.

“By enforcing the ban it seems the sole aim of the government is to not allow people outside know what is happening in Kashmir,” said senior journalist Muzaffar Raina. “In this situation, Kashmiri journalists have become as big a story as Kashmir itself.”

Anuradha Basin, the editor of reputed Jammu-based daily Kashmir Times, has already filed a petition in the Supreme Court seeking that media should be allowed to work freely in Kashmir and the authorities should lift all restrictions on their working.

Following the culmination of sit-in protest, journalists took out a peaceful march to city’s Press Enclave. 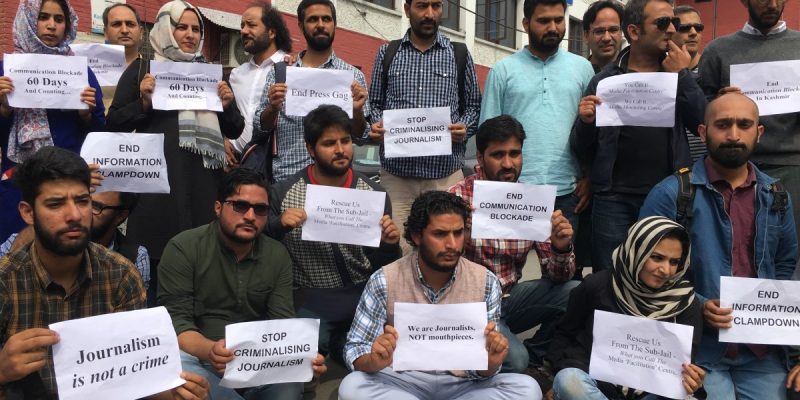 Hilal Mir, another senior journalist, said the fact that it took journalists 60 days to protest against the communication gag “shows the fear they are working in” and how they have been “scared into silence”.

A joint statement issued by 11 Kashmir-based journalists’ associations has demanded that the communication ban been lifted.

“There have been no clear answers from the government why it has barricaded Kashmiri journalist fraternity under a communication blockade,” the statement said. “The government must come up with up with an answer on how long the crackdown on news will continue.”