China's Foreign Ministry branch in Hong Kong said on Wednesday that the club should "immediately stop meddling with Hong Kong affairs on the pretext of press freedom". 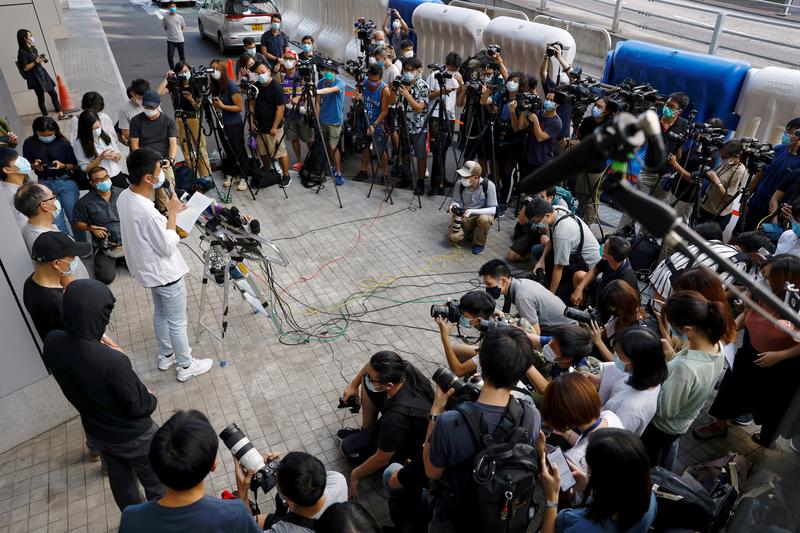 Pro-democracy activists Eddie Chu and Owen Chow with relatives of some of the 12 Hong Kong activists detained at sea, as they reportedly sailed to Taiwan for political asylum, speak to media before reporting to the police to seek help in Hong Kong, China September 20, 2020. Photo: Reuters/Tyrone Siu/File Photo

Hong Kong: The Hong Kong Journalists Association (HKJA) said on Thursday a move by police to narrow the definition of “media representatives” allowed at public events such as protests could limit scrutiny on law enforcers.

The guidelines, officially changed on Wednesday, now exclude recognition of press passes issued by local media associations such as HKJA and Hong Kong Press Photographers Association (HKPPA), while accepting journalists from 205 bodies registered with the government and international media.

News associations say the move could limit the work of and raise the risks of arrest for freelancers and student reporters, who have captured some of the most striking scenes of the pro-democracy protests that roiled the city last year, including a video of a police officer shooting a demonstrator in October.

Police are suspicious of student reporters, who fit the age group of the most ardent protesters, and say they have discovered fake media badges and been attacked by fake reporters.

“All the police want is to limit us,” said HKJA chairman Chris Yeung, appearing next to representatives of HKPPA and six other media unions.

“Journalism students are the future of our industry,” he said, speaking in front of a banner reading “Defend the truth, no government vetting.”

Some students who said they were reporting for their student union publications have been arrested at protests for suspected crimes including rioting.

Also read: It’s Time China Turned Its Back on Racism and Embraces Black Lives Matter Within

The change to internal guidelines meant that recognised reporters will be allowed in cordoned zones where media is not usually allowed and could also be offered interviews at the scene, which has also been rare, he said.

Lee said the guidelines do not attempt to change the definition of journalists who can conduct reporting outside cordoned areas.

The Foreign Correspondents Club (FCC) said on Wednesday the move was “another step in the erosion of Hong Kong‘s once cherished press freedom as it would give the police — rather than reporters and editors — the power to determine who covers the police“.

The FCC expressed concerns that journalists not recognised under the new guidelines risked being arrested for unlawful assembly and rioting.

China’s Foreign Ministry branch in Hong Kong said on Wednesday that the club should “immediately stop meddling with Hong Kongaffairs on the pretext of press freedom”.

“The truth is not to be distorted,” it said. “By anxiously whitewashing the fake journalists, FCC Hong Kong is attempting to endorse the rioters and condone their ‘burn with us’ violence, thus sowing more trouble in the city.”

Pro-democracy protests have been smaller and fewer this year due to coronavirus restrictions on gatherings and since the introduction of a national security law on June 30, 2020. There are calls for protests on October 1, 2020, China’s national day.