Sixty-six-year-old Tansen Tiwari has been booked under IPC sections covering obscene acts and defamation after a BJP leader filed a complaint.

Bhopal: Tansen Tiwari, a veteran journalist from Gwalior district in Madhya Pradesh, has been booked by the police for referring to Bharatiya Janata Party leaders as gappu (braggart) and tadipar (externed) in a social media post on Sunday.

The Gwalior police registered the case after a local BJP leader and advocate, Awdhesh Singh Bhadauria, reported the matter to the Gola Ka Mandir police station on his party’s letterhead.

In his compliant, the BJP leader said that on May 22, 66-year-old journalist Tansen Tiwari wrote a post on Facebook which indirectly describes Prime Minister Narendra Modi as ‘gappu’ and other party leaders as ‘tadipar’ and ‘balatkari‘ (rapist), which not only defames the party and its leaders but also hurt the sentiments of party leaders and “crores of members”. 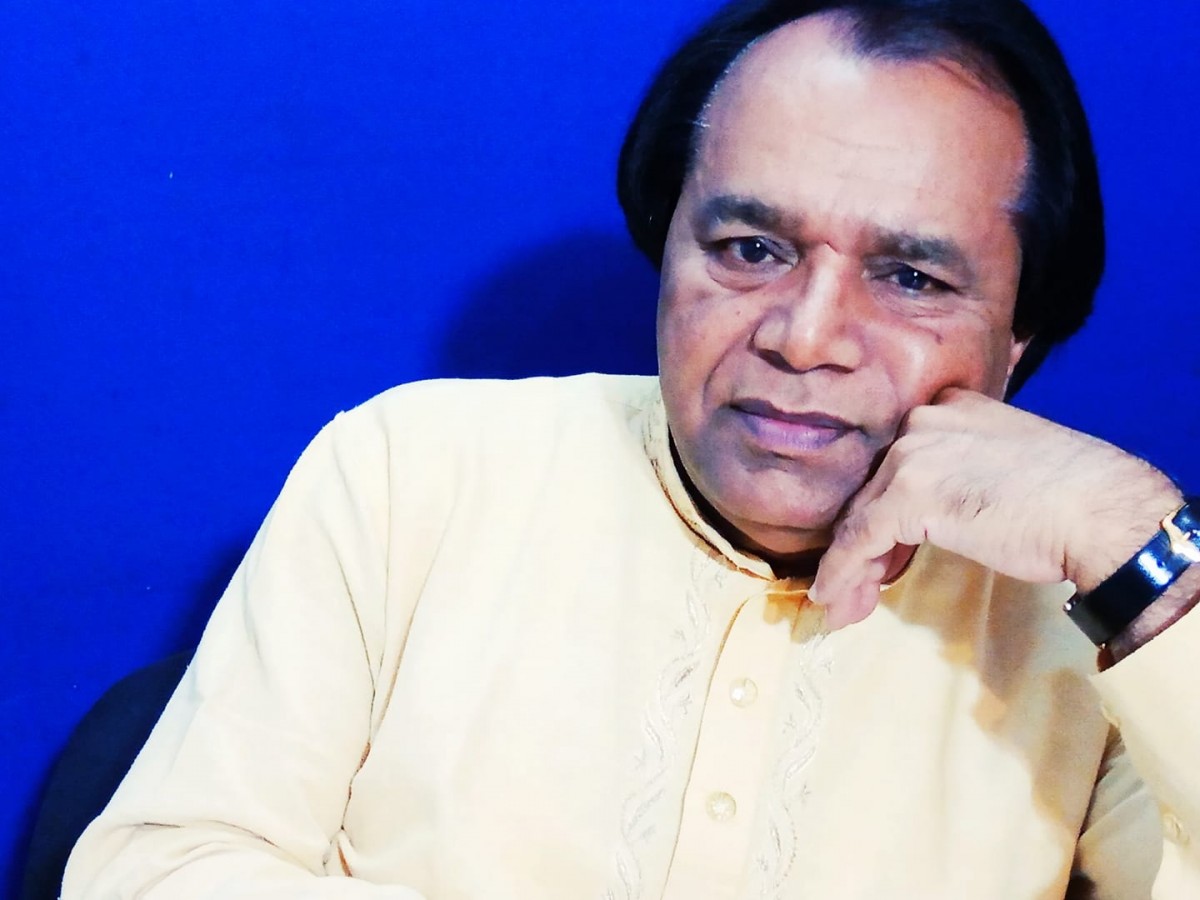 While Tiwari’s post did not name any leader, Modi is sometimes referred to by critics on social media as “gappu” and “feku” – a reference to his extravagant claims – while home minister Amit Shah is called “tadipar” for being externed by the high court from Gujarat as a condition for his bail in the Sohrabuddin-Kausar Bi custodial killing case.

Soon after the BJP leader’s written complaint was submitted, the Gwalior police booked Tiwari. Heera Singh Chouhan, town inspector of Gola Ka Mandir police station, told The Wire, “Based on the BJP leader’s complaint a case has been registered against Tansen Tiwari on Sunday under section 294, 500 of the IPC and section 67 of the IT Act for a Facebook post.”

Section 294 of the IPC pertains to public acts of obscenity (‘Whoever, sings, recites or utters any obscene song, ballad or words, in or near any public place’), 500 is (defamation) and Section 67 of IT Act relates to publishing or transmitting obscene material in electronic form).

The police say they are now probing the matter, and that no arrest has been made yet.

Tansen Tiwari, is a well-known journalist from Gwalior district, has worked for various print and electronic media houses in Madhya Pradesh. Currently, he writes for various media platforms and is an accredited journalist. 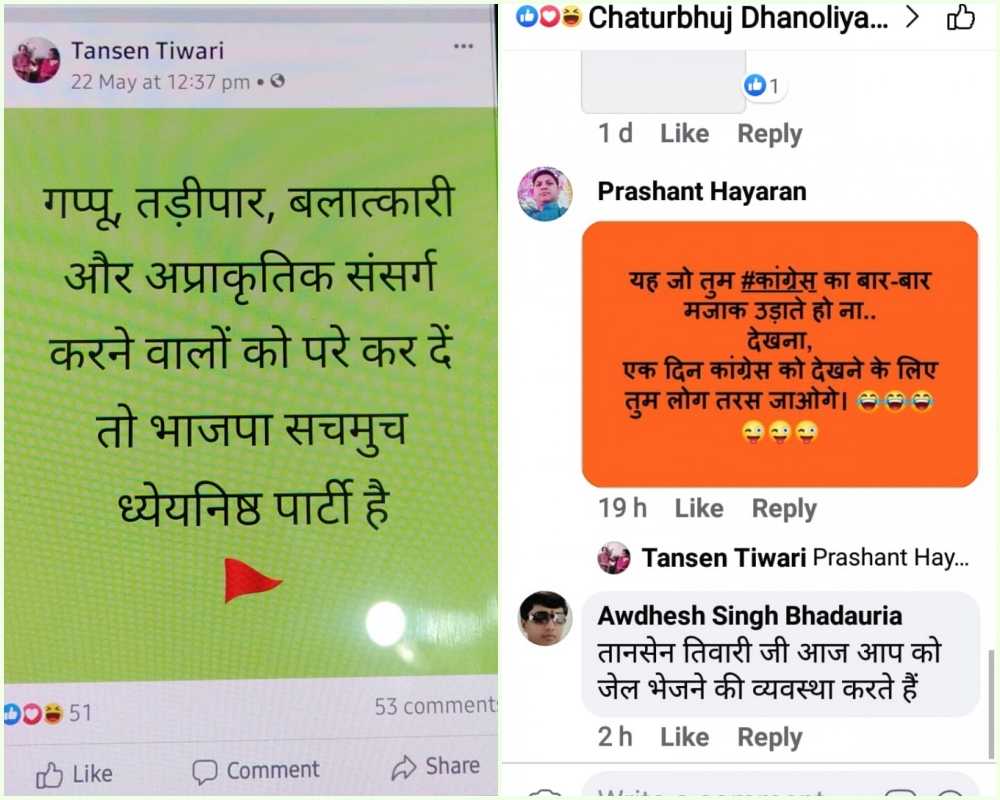 On May 22, Tiwari posted on his Facebook page in Hindi, “Gappu, Tadipar, Balatkari, aprakirtik sasanghat walo ko pare kar de to BJP suchmuch dheynisht party hai.” (Loose translation: If it gets rid of braggarts, the externed, rapists, and those who keep unnatural company, then the BJP is truly a party which focuses on its goals.)

The BJP’s Awdhesh Singh Bhadauria first commented on this post, “Tansen Tiwari ji, aaj aap ko jail bhejne ki vyavastha karte hai (Tansen Tiwari, be ready to go jail, we are making the arrangements).” And the following morning, he reported the matter to the police.

Bhadauria told The Wire, “The journalist Tiwari is always criticising the leaders of the government including PM Modi and finance minister Nirmala Sitharaman in his Facebook posts.” 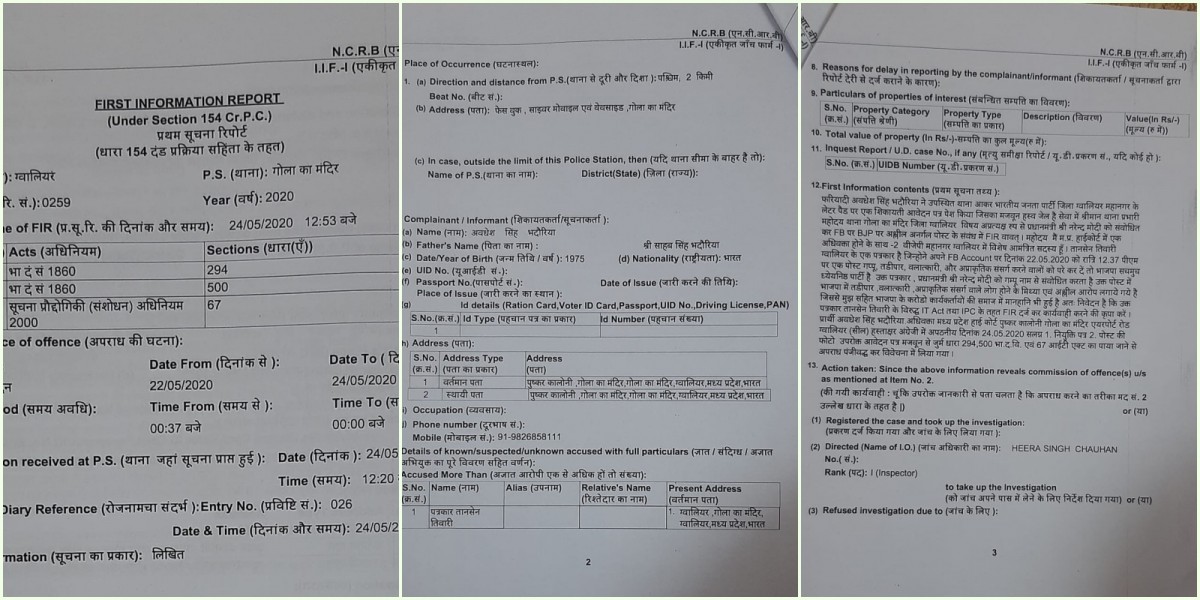 Sharing screenshots of Tiwari’s previous post, Bhadauria said this time he indirectly called Modi a gappu and other BJP leaders as tadipar and balatkari, which is “totally inappropriate”.

“Hence, I reported the matter in the nearest police station and now the police will do its part,” he said.

Hitting back at Bhadauria’s complaint, Tiwari said, “I have no personal enmity with any BJP leader. I have been a journalist for the last four decades and it’s my right to criticise or question the policies and functioning of the government’s leaders.”

Tiwari claimed that since he wrote against the Union government’s policies and it leaders, the BJP is targeting him and trying to quell his voice. “I demand immediate withdrawal of the case,” Tiwari said.

Backing Tiwari, members of the Gwalior Press Club met with the Madhya Pradesh Director General of Police and handed over a memorandum on Tuesday. They demanded that the FIR be withdrawn with immediate affect as it was an attack of press freedom. Member of the Gwalior Press Club, Rakesh Singh questioned the functioning of the Gwalior police. He said, “A high level enquiry should have been conduced before registering a case against the journalist. But, since the complainant is from the ruling party, the police did not take pains to conduct the preliminary enquiry and registered the FIR against Tiwari.”

“We have met with the DGP and demanded that press freedom should not be crushed by political leaders and the FIR should be quashed,” Singh said.