From 1907’s struggle against British land revenue rates, to 202-21’s agitation against the new farm laws, at least five newspapers were launched to provide platforms for those fighting for their rights. 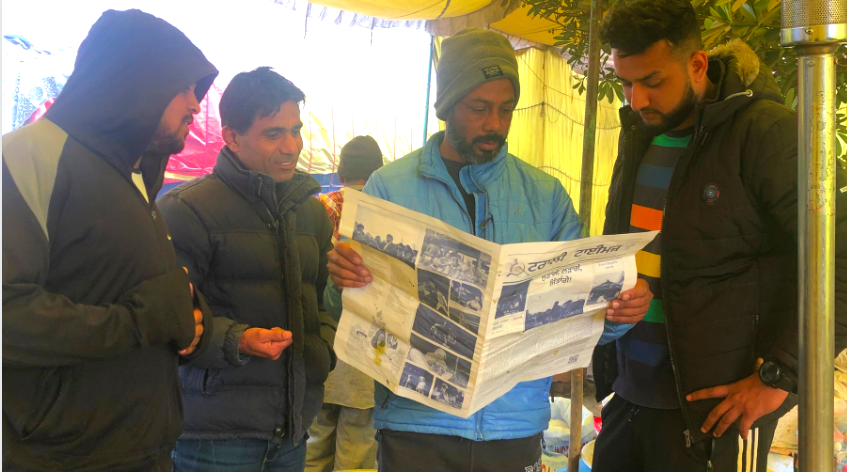 Jalandhar: Nearly a century ago, when desperate farmers and labourers in Punjab agitated for their rights in British-ruled India, they found a platform in a newspaper called Kirti (Labourer). This newspaper not only led to the formation of the Kirti Kisan Party but also caught the attention of the national and foreign press. In its February 11, 1928, edition, Pravda, a Russian newspaper then the official mouthpiece of the Communist Party of Soviet Union, wrote: “Good news from Punjab. They have a paper of their own to organise the peasantry”.

Today, Trolley Times, a bilingual newspaper for farmers that was launched on December 17, 2020, appears to be the new Kirti. With its first headline – ‘Unite, Fight and Win’ – and its name based on the tractor trolleys on which Punjab’s farmers arrived at the borders of Delhi to protest the new farm laws, it caught the imagination of the national and international media immediately.

Though not the farmers’ official mouthpiece, Trolley Times has so far printed six editions, launched a digital edition and is soon to launch an official website.

Do protests pave the way for newspapers? Do newspapers birth protest movements? Whatever the answer might be, history shows us that protests and newspapers often work in tandem.

From the latest to the first, The Wire tracks five historic protests in Punjab and the newspapers associated with them.

Ajay Paul Natt, one of the three co-founders of Trolley Times based at the Tikri border, said, “We reached the Delhi border on tractor trolleys, live in them here and decided to start a newspaper called Trolley Times from a trolley.” Ajay Paul Natt, one of the co-founders of the initiative, holds up a copy of ‘Trolley Times’. Photo: Kusum Arora

Every week, 5,000 copies of Trolley Times are printed, distributed free of cost and open to anyone for re-prints.

“None of us, including my co-founders Gurdeep Dhariwal and Surmeet Maavi, are from the field of journalism,” said Natt.

“The response of non-resident Indians from the US, Canada, the UK, Australia and Europe through our digital platform is enormous. One supporter printed 10,000 copies of Trolley Times and distributed it in Australia.”

The print edition of Trolley Times is mostly read by the older farmers, said Natt. “The youth read the digital edition, but older men and women still enjoy reading a newspaper,” he said.

People who visit the protest sites are always keen to acquire a copy of Trolley Times. When Jasdeep Bhogal from Rurka Kalan village in Jalandhar visited the protesting farmers at the Singhu border, he got himself a copy.

“Trolley Times is a big boost to the farmers’ protest,” Bhogal said.

“Though a campaign for the farmers’ protest called Kisan Ekta Morcha has been launched on social media, this is the first time that the farmers have a newspaper of their own. I will keep my copy as a prized possession.”

Trolley Times is very empowering, said Maninder Singh Sandhu, who accompanied Bhogal to the Singhu border. “I come from a farming family. I can’t recall seeing any newspaper on farmers’ issues in all these years. Trolley Times has renewed our identity and we are glad it has made its presence felt among the mainstream media,” he said.

The first issue of Kirti, a newspaper dedicated to farmers, labourers and the working class, was published in February 1926 in Amritsar. According to Hindustan Ghadar Party – A Short History by Sohan Singh Josh, the newspaper had a dedication on top of its front page: “Dedicated to those martyrs who came forward for service when sacrifice was costlier than it is today.” 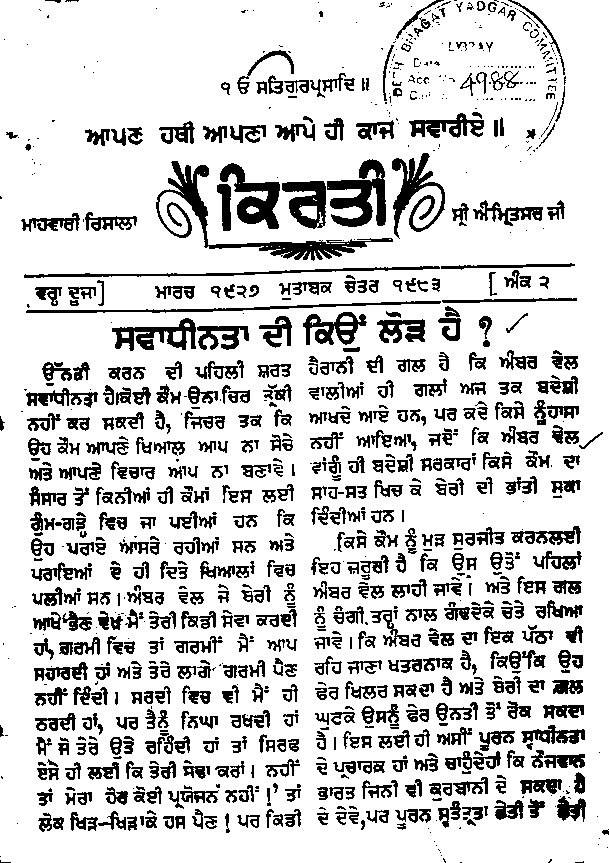 Bhai Hardit Singh was the editor of Kirti, with Bhai Bhag Singh from Canada and Bhai Santokh Singh from the US as his joint editors.

The Kirti Kisan Party, founded in 1928 by Sohan Singh Josh, was named after the newspaper. Josh wrote in his book: “The publication of Kirti was a big political event. It could not go unnoticed either in Moscow or in London or in India.”

London’s The Times reproduced Josh’s lines in its edition of May 15, 1928, and Calcutta’s The Statesman reproduced it from the Times. According to Josh’s book, the 1926-27 India Government Report said: “Soviet Russia has established relations with the turbulent Sikhs. As a result of this, a paper named ‘Kirti’ has come out from Amritsar.”

“The profound impact of Kirti can be gauged from the fact that the Kirti Kisan Party was named after it,” said Charanji Lal Kangniwal, resident writer at Desh Bhagat Yadgaar Memorial Hall, Jalandhar. “It was published in Urdu and Punjabi from Amritsar. Bhai Santokh Singh, who had some training in newspaper publishing in Russia, led the newspaper.” Kirti enjoyed cult status till the end of World War II. “The newspaper’s offices were often raided and the newspaper was sometimes banned, but its editors never bowed to the British,” said Kangniwal. “Later, Kirti Lehar was started from Meerut in Uttar Pradesh, but it soon discontinued. Another weekly newspaper, Mazdoor Kisan, was also launched in Punjabi in 1931.” The historic ‘Mazdoor Kisan’ published from Amritsar in 1931. Photo: From the archives of Desh Bhagat Yadgaar Memorial Hall, Jalandhar

Today’s farmers’ protests are getting a fillip from Trolley Times, said Kangniwal. “Many changes at the political, social and cultural levels are taking place, but one thing is clear: the farmers’ protest will leave a deep impact on the country,” he emphasised.

Launched in Punjabi and Urdu from Lahore in 1920, The Akali emerged as a platform for the Gurdwara Reform Movement in Punjab and to protest the massacre that had taken place in Amritsar’s Jallianwala Bagh in 1919. It continues to be published today from Jalandhar, but its name has been changed to Akali Patrika.

On November 1, 1913, in San Francisco, USA, an association of Indian immigrants in the USA and Canada decided to launch a weekly newspaper called Ghadar Weekly or simply Ghadar to highlight the economic exploitation and political suppression of their community in North America. 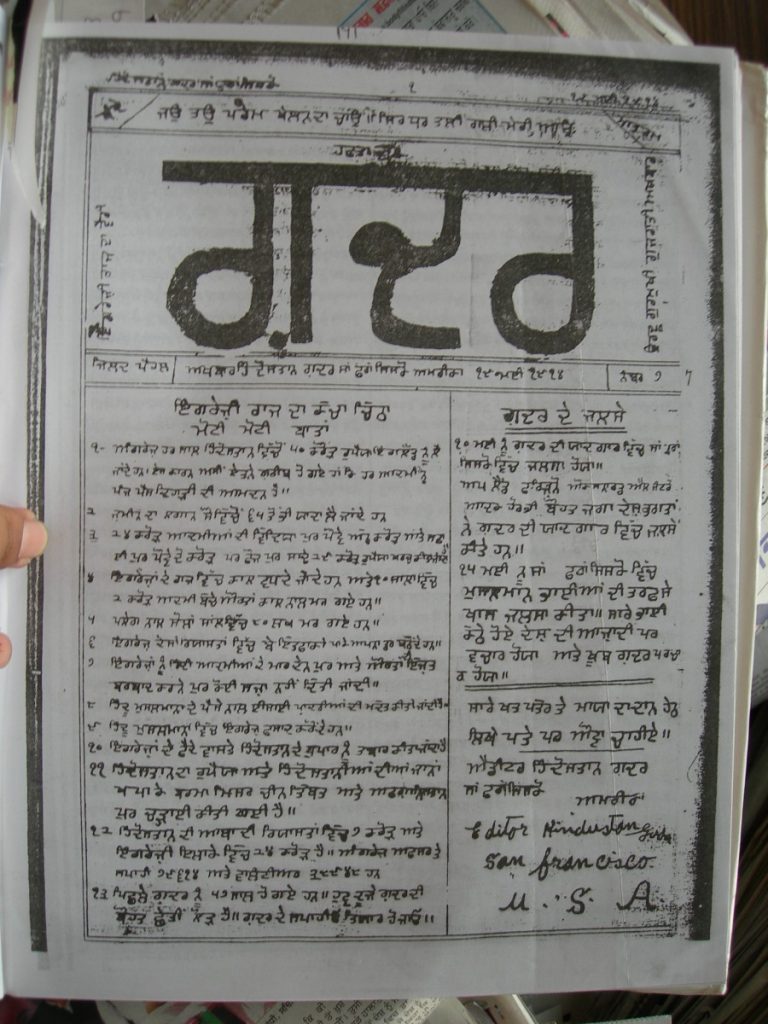 Though the first edition of Ghadar in Punjabi was published on December 9, 1913, the Desh Bhagat Yadgaar Hall, Jalandhar, organises its ‘Mela Ghadari Babeya Da’, a commemoration of Ghadar freedom fighters, on November 1 every year.

According to Kangniwal, Ghadar became so important that Indians in Canada, America, Hong Kong, Malaya, Singapore, China and other far-flung places waited impatiently for every fresh edition.

In his book Hindustan Ghadar Party – A Short History, Sohan Singh Josh wrote that the launch of Ghadar Weekly was a big event in the history of India’s freedom movement. The newspaper was edited by Lala Hardayal, one of the most outstanding intellectuals of that time.

The Ghadar Party, a movement for India’s independence by Indians who had emigrated abroad, was named after the newspaper, said Gurmeet Singh.

“Like Trolley Times today, handwritten copies of Ghadar were saved and passed on to other readers. And like Ghadar Weekly in the past, Trolley Times today is encapsulating the history of the farmers’ protests, which will let the protests be remembered for years to come,” Gurmeet added.

At a 1907 public meeting of farmers in Lyallpur (now Faislabad in Pakistan), a song called Pagdi Sambhal, O Jatta (Take Care of Your Turban, O Peasant) became a huge hit.

Like the farmers of 2020-21 at Delhi’s borders, the farmers at that 1907 meeting were protesting three farm laws introduced by the British – the Land Colonisation Bill, the Doab Bari Act and the Punjab Land Alienation Act.

Gurmeet Singh said that freedom fighter Bhagat Singh’s father, Kishan Singh, and paternal uncle, Ajit Singh, mobilised the people to not pay the land revenues and water rates imposed on them by the British government.

To motivate people to join the agitation, a newspaper called Jhang Sayal was launched. “Banke Dayal was the first editor of Jhang Sayal and he was the one who wrote the song Pagri Sambhal, O Jatta,” said Gurmeet Singh.