Many international and Indian news outlets fell for the hoax, but only a few corrected their error. A piece of news that made headlines on September 27 around the world claimed that the chancellor of Kabul University Mohammad Ashraf Ghairat said in a tweet, “As long as a real Islamic environment is not provided for all, women will not be allowed to come to universities or work. Islam first.”

The New York Times reported on the alleged tweet, based on which Pakistan-based The News also carried a report. 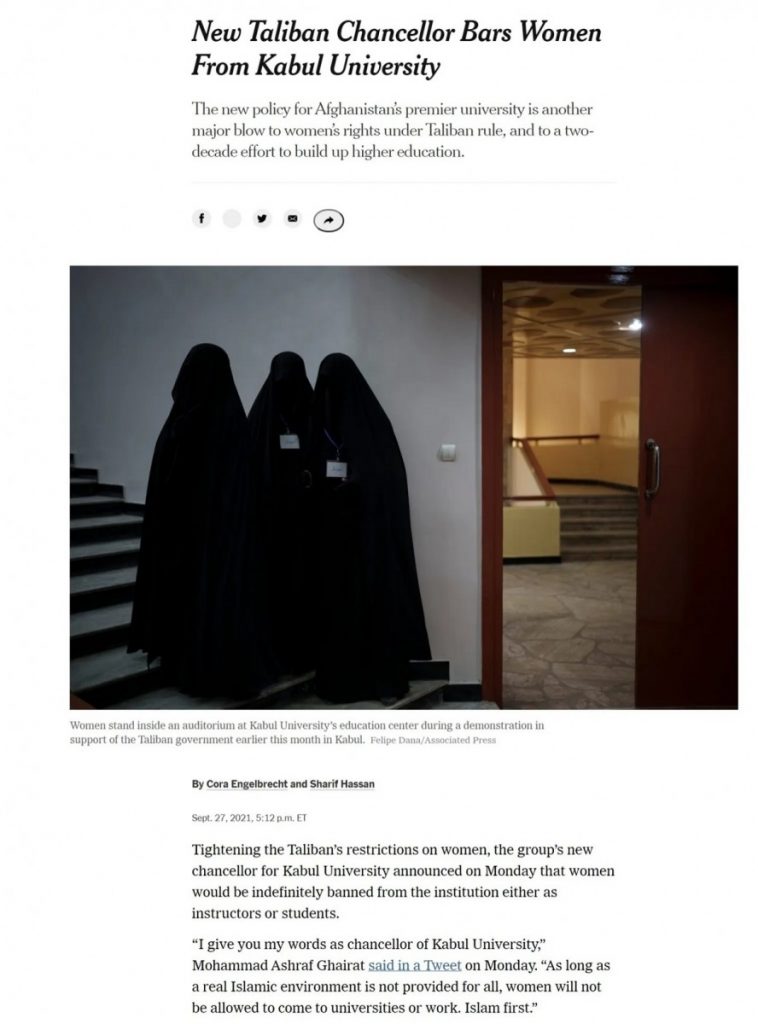 Folks!
I give you my words as the chancellor of Kabul University:

as long as real Islamic environment is not provided for all, women will not be allowed to come to universities or work. Islam first.

The tweet seemed to suggest that the Islamist extremist organisation has taken a reversal from its earlier stand on women’s education stated by the Taliban education minister Abdul Baqi Haqqani. He had said that women will be allowed to study in gender-segregated classrooms and Islamic dress.

ABC News and NPR furthered on the story claiming that Ghairat issued a second tweet, criticising the New York Times for what he described as a “bad misunderstanding” of his comments.

A bad misunderstanding of my words by the New York Times. I haven’t said that we will never allow women to attend universities or go to work, I meant that until we create an Islamic environment, women will have to stay at home. We work hard to creat safe Islamic environment soon. https://t.co/7Yrdtd3GKL

Other international publications that carried stories claiming Ghairat tweeted that women will not be allowed to come to universities or work if an Islamic environment is not provided were CNN International, CNN Philippines, UK-based The Independent and American publications The Hill and Bloomberg. The article by Bloomberg was republished by Business Standard in India. India Today also referred to Bloomberg’s story.

ANI and Hindustan Times referred to the CNN article while reporting on the development. NDTV and Lokmat republished ANI’s feed. Other Indian media outlets that based their reports on the alleged tweet were The Print, Yahoo News, Deccan Herald and The Week.

The person later tweeted that he is a 20-year-old student of law and political science at Kabul University. “All these days that I was tweeting pretending to be the new chancellor, no one doubted my words to be fake, & the reason is clear, what I was saying is literally both the ideology and actions of Taliban towards education, human and women rights in Afghanistan [sic],” he wrote.

students of KU, are disheartened and broken.

All these days that I was tweeting pretending to be the new chancellor, no one doubted my words to be fake, & the reason is clear, what I was saying is literally both the ideology and actions of Taliban towards education, human and

The alleged student told UAE-based the National News that he set up the account to highlight the undoing of Afghan education. The outlet also wrote that “while his decision to set up the fake account was driven in part by his frustration, it was also a desire to prove a point about the Taliban”. Nobody doubted what he was tweeting.

A few media outlets acknowledged the error, most did not

After it was brought to light that the account posting the tweets was not handled by Ashraf Ghirat, a few media organisations added clarifications to their stories. This included the New York Times, CNN International (it’s noteworthy that CNN Philippines has not issued any corrigendum) and The Quint. Republic and Deccan Herald took down their reports without acknowledging the error. Reports by all other outlets highlighted in this report have neither been corrected nor removed at the time of writing.