Editorials on 'The Tribune' and 'Indian Express' acknowledged the role of caste, class and religion when it comes to those who are more likely to receive death sentences. 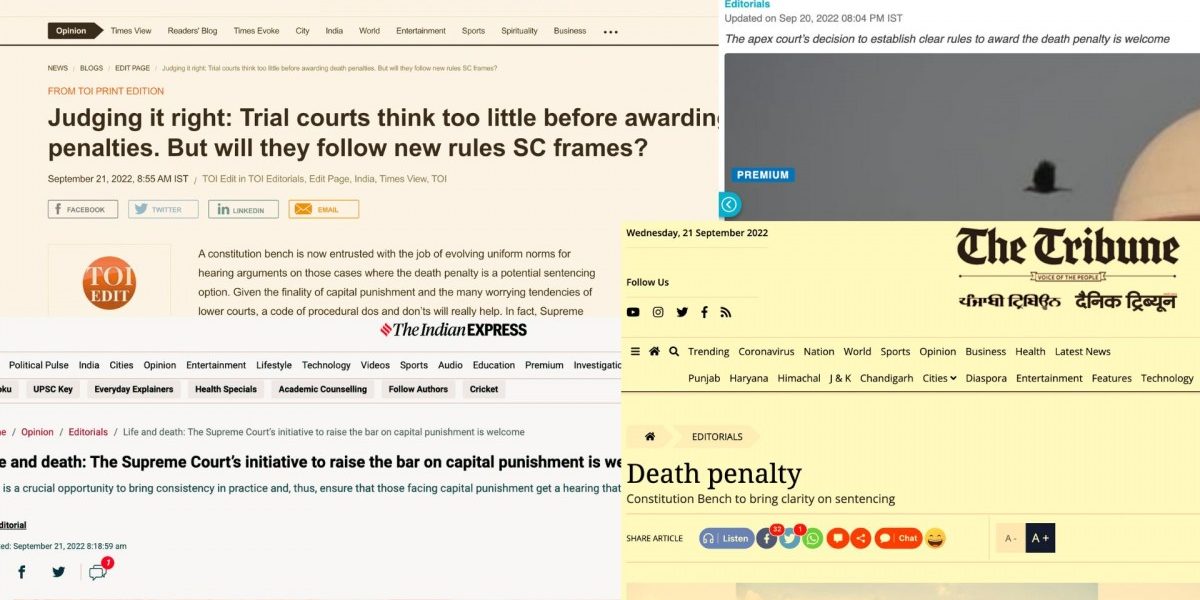 Illustration: Newspaper editorials on the move by the SC to refer to a five-judge constitution bench a suo motu plea on framing guidelines on how and when potential mitigating circumstances should be considered by courts during trial in cases which entail the death penalty.

New Delhi: The Supreme Court has referred to a five-judge constitution bench a suo motu plea on framing guidelines on how and when potential mitigating circumstances should be considered by courts during trial in cases which entail the death penalty as the maximum punishment.

English newspaper editorials largely welcomed the move, highlighting with the help of statistics how special groups have been at a disadvantage. More than one paper called on the lower courts to follow the guidelines which may come out of the process.

The Times of India said that a code of procedure could help, given the arbitrary tendencies displayed by lower courts.

“In fact, Supreme Court’s scrutiny, initially by a three-judge bench, was set off by a trial court giving death penalty to a convicted person on the same day the prosecution won the case,” it says, noting that good judicial practice demands judges consider mitigating circumstances – a traumatic past, mental health – before pronouncing a death sentence.

The Criminal Procedure Code is “sketchy” on this, says the TOI editorial.

It also observes that while executions itself are rare in India, dozens of death penalties are handed out every years.

“Laws that prescribe the death penalty range from IPC 302 (murder) to the anti-terror UAPA to the amended POCSO Act that deals with sexual offences against children. But trial judges interpret these statutes too liberally,” it says.

The editorial cites NLU Delhi’s Project 39A’s data – 144 death sentences were awarded in 2021 against 78 in 2020, and a total of 488 prisoners have been on death row till December 2021. The number of sentences commuted to life imprisonment and acquittal grow thin as the courts get higher. As always, it is the financially disadvantaged who suffer from the lack of quality legal assistance.

The editorial also calls on the Supreme Court to note that its guidelines are also often ignored by trial courts and gives the example of sedition and Section 66A of the IT Act.

“So, the constitution bench must not only settle the matter quickly but also ensure lower courts follow its rules,” it says.

‘Sentencing must be fair’

The Hindustan Times editorial highlighted that sentencing must follow the clarity that the Supreme Court’s move could bring.

Citing the 1980 Bachan Singh case, HT vouched for the “rarest of rare” doctrine, noting how it has been mired in “arbitrariness, confusion and the conviction-centred approach of the prosecution” in the days to come.

HT, too, cites Project 39A’s data, to note that death penalty cases between 2000 and 2015 in Delhi, Maharashtra and Madhya Pradesh found that trial courts largely relied on aggravating circumstances to fix sentencing, and in 51% of cases, mitigating circumstances were not considered.

The editorial calls the apex court’s move to lay down guidelines an important step. The variety of notions on this issue is reflected by disparity in even a three-judge bench, the paper noted.

Three aspects were highlighted by the editorial.

“The first is same-day sentencing. Unlike some other countries, same-day sentencing is an established norm in India, and so the bench will need to decide whether this provides enough time to consider all relevant mitigating factors,” it says.

The second will be on the collection of this information – including reports from jail authorities, reform committees, and external mental health experts and psychologists before sentencing.

And third, the bench will need to see whether a broader change in mindset can be effected.

Indian Express, in its editorial, pins the basic issue at the above words: life and death.

Calling the CJI Lalit-led move a “welcome intervention,” the editorial observes that this is a case the Supreme Court took up on its own. The editorial notes the court’s own observations in referring the case to a constitution bench – on how the current practice places the convict at a hopeless disadvantage.

Vouching for the Bachan Singh “rarest of rare” safeguard, the editorial also says, “The 2015 Law Commission Report on Death Penalty recommended abolition of death sentence except in terror-related cases. The report noted the global trend to be a continuous drop in “active retentionist” countries — over 144 countries have either in law or practice abolished the death sentence.”

The editorial calls for raising the procedural bar in imposing capital punishment so as to strike a crucial balance between total abolition and active advocacy of the death sentence.

Most importantly, the editorial bluntly acknowledges the role of caste, class and religion in the award of death sentences.

This editorial too cites Project 39A data: “In a 2016 study analysing profiles of 385 death row prisoners, Project 39A, a criminal reforms advocacy group, found that 76% of such prisoners belonged to scheduled castes and scheduled tribes, other backward classes or religious minorities and over three-fourths were from economically vulnerable and over 62 per cent did not complete secondary school.”

Additionally, in various cases where death penalty was given, “collective conscience of the society” has been an influencing factor – pointing to what the editorial calls is a flag-waving approach of trial courts in awarding capital punishment.

Also read: Death Penalty is State-Sponsored Murder, the Indian Judiciary Must Put a Stop to Executions

“There is no denying that the scales are tilted against the convicts as most get to speak of the mitigating circumstances only after their conviction,” The Tribune brazenly notes in its editorial.

The editorial also observes that while judgments by three-judge Benches in the past have reflected unanimity on granting a meaningful and effective hearing to the accused, difference of opinion has been on the consideration of mitigating circumstances – factors that lessen the severity or culpability of a criminal act – and the time required to be given for bringing these on record.

The editorial calls the setting down of guidelines “crucial.”

This editorial also notes that the “scales are tilted against the convicts” as most get to speak of the mitigating circumstances only after their conviction.

It also highlights the role of factors related to the upbringing, education and socio-economic conditions.