A total of three sedition cases have been filed across three BJP-ruled states against journalists Rajdeep Sardesai, Mrinal Pande and others. 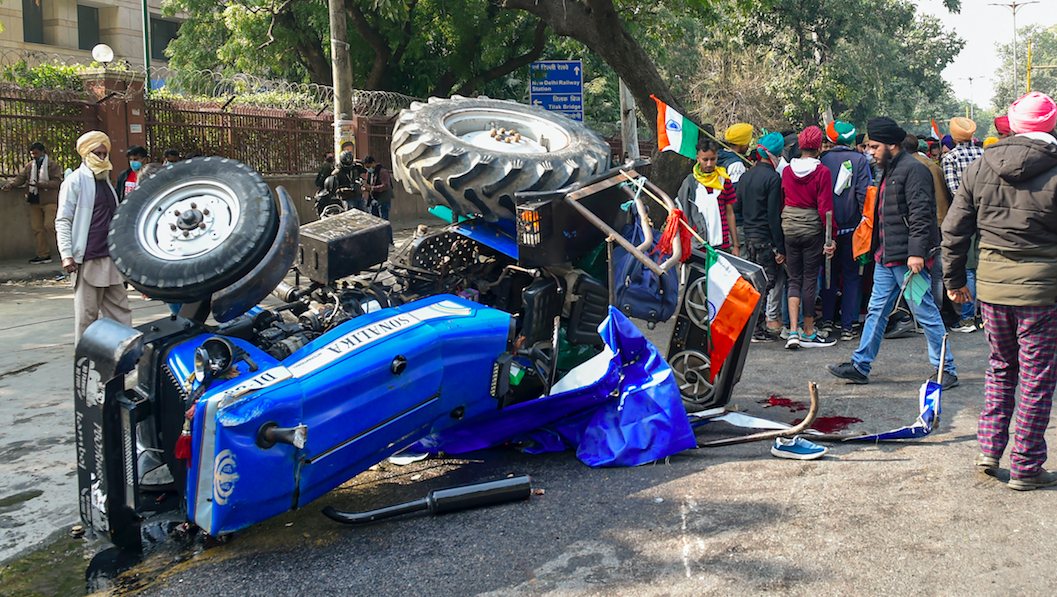 Farmers stand next to an overturned tractor at ITO during their Kisan Gantantra Parade to protest against Centres farm reform laws in New Delhi, January 26, 2021. Photo: PTI

New Delhi: Several media bodies on Friday strongly condemned the sedition FIRs against senior editors and journalists for their reporting on the farmers’ tractor rally and the ensuing violence in the capital on Republic Day, saying it was an attempt to “browbeat” and “intimidate” the media.

The journalist bodies have released statements condemning that these editors have been “specifically targeted” for reporting the accounts pertaining to the death of one of the protesters on their personal social media handles as well as those of the publications they lead and represent.

The Press Club of India condemned the stringent moves by the respective state governments, and said “it is criminal to ascribe this as motivated reporting”.

“The editors from vary varied journalist enterprises have been accused of entering into a “conspiracy” to bring about discord between communities, defame the Sikh community and bring about confusion in a border state (Punjab) and, in effect, aid the country’s enemies. This would be laughable if it were not pointing to malignant motives on the part of a section of the political establishment and the police force under its authority. In short, the attempt is to vilify the journalists in question as anti-national,” the Press Club of India said in a statement.

Also read: After a Republic Day to Remember, Will the Prime Minister Finally Read the Signs?

Terming it as a move to muzzle the media, the journalists’ body has urged the authorities in Lucknow and Bhopal to withdraw the FIRs against the journalists. It also called upon the Union home ministry to reassess the situation and caution to the Uttar Pradesh and the Madhya Pradesh governments.

In a statement, the Editors Guild of India demanded that such FIRs be withdrawn immediately and the media be allowed to report without fear and with freedom.

“It must be noted that on the day of the protest and high action, several reports were emerging from eyewitnesses on the ground as well as from police, and therefore it was only natural for journalists to report all the details as they emerged. This is in line with established norms of journalistic practice,” the Guild said.

The Guild added it “strongly condemns the intimidating manner in the way in which the Uttar Pradesh and Madhya Pradesh Police” have registered FIRs against senior editors and journalists (including current and former office-bearers of EGI) for reporting on the farmers’ protest rallies and the ensuing violence that took place in the national capital on January 26.

“On a day thick with information, the EGI finds these FIRs, filed in different states, as an attempt to intimidate, harass, browbeat, and stifle the media,” the Guild said.

The Editors Guild of India condemns the intimidating manner in which UP and MP police have registered FIRs against senior journalists, for reporting on farmers’ protests in Delhi on Jan 26. EGI finds these FIRs as an attempt to intimidate, harass, and stifle free media. pic.twitter.com/Mf3albnYvs

That the FIRs have been booked under a total of 10 different provisions, including sedition laws, promoting communal disharmony, and insulting religious beliefs, is further disturbing, it said.

The Guild also reiterated its earlier demand that the higher judiciary takes serious cognisance of the fact that several laws such as a sedition are often used to impede freedom of speech, and issue guidelines to ensure that “wanton use of such laws does not serve as a deterrent to a free press”.

The Indian Women’s Press Corps (IWPC) also “unequivocally” condemned the UP Police’s decision to file an FIR for sedition against Mrinal Pande, founder president of the IWPC, along with several leading journalists, allegedly because they shared “unverified” news during the farmers’ tractor rally in Delhi on Republic Day.

In a statement, the IWPC said it believes that the charges against Pande, who has been the editor of several leading news publications in the country, is a “smack of a deliberate attempt to misrepresent the situation”.

“It is an attempt to browbeat the media and push it to fall in line,” the IWPC said.

The Delhi Union of Journalists has demanded that the cases against the journalists be withdrawn immediately. “We reiterate our demand for a special law to protect media persons from arbitrary charges, arrests and prosecution for doing their job. We urge the repeal of draconian laws including the law on sedition,” it said.

The Union also expressed concerns about the attempted break-in at journalist Neha Dixit’s home, demanding the prosecution of the guilty.