What Role Did the Media Play During the Delhi Riots?

Independent media work is needed for greater clarity and greater credibility, especially since no prominent non-Muslims are presumed to be under investigation so far.

Note: This is a report from the Press Council of India.

How did the media in the nation’s capital acquit itself in its presentation of the horrific communal violence in the northeast corner of Delhi which, officially, has already claimed more than 50 lives (and the count of the dead could rise as bodies are fished out of a stinking sewerage canal that covers a large part of the affected area)?

At the first level, the answer is straightforward – our photographers and our reporters, from both television and print, showed exemplary courage in discharging their professional responsibility.

In the line of duty, on February 25, a large number were admitted to hospital. One of them, a television journalist, had a gunshot injury. Many had been hit by stones hurled by rival mobs. Another television reporter had been hit and punched in the face by communal fanatics and had teeth missing.

A joint statement of the Press Club of India (PCI) and the Indian Women’s Press Corps (IWPC) on February 25 had noted that the “police were either absent or have not come to help”. This was a noteworthy feature, made noteworthy by the fact of overt police inaction, especially on February 24 and 25, when the violence had turned full-blown and was at its peak.

In fact, media accounts have hinted at police personnel aiding a section of the producers of communal violence. This aspect needs to be examined in depth by an impartial probe, whose terms of reference ought to go beyond capturing specific events and delve into underlying – and surrounding – social and political causes if basic truths are to be unearthed for future guidance on police administration, policing responsibilities and state orientation.

The PCI-IWPC joint statement had noted, “Shockingly, mobs were checking religious credentials of journalists.” The published account of a Times of India photographer, Anindyo Chattopadhyay, speaks of male journalists being made to lower their trousers to check religious identity. This again was a new feature. Mr. Chattopadhyay is a member of the PCI Managing Committee and his insights were useful in the preparation of this report, besides those of a clutch of reporters and photographers who helpfully gave us a sense of the atmosphere and the time-line as the trouble spread across a corner of Delhi.

In the 1984 riots in which innocent Sikhs had been targeted, the police had been found wanting. Police personnel had encouraged rampaging mobs in some instances. The senior police leadership had remained quiescent, as in February 2020. However, reporters and photographers had not been threatened and no particular bravery was called for on their part.

Was this in part due to the fact that the mobs in 1984 were amorphous in nature, though local figures linked to the then ruling party directed mob actions in their areas, while in contrast, the communal violence of 2020 appeared to be triggered – as widely reported and commented on – in the wake of provocative public comments of an influential ruling party personality who, just weeks earlier, had created an ‘India-Pakistan’ binary – a deplorable construct aimed a demeaning India’s largest religious minority – in the context of the Delhi Assembly election?

More, the ruling national party of today is able to intervene to further its political and ideological ends through a host of civil society outfits and networks that frontload the religious factor and frequently engage in uncivil conduct? Some of these, it is widely alleged, were acting upfront in the ‘India-Pakistan’ battle zones with devastating effect.

These appeared to be ideologically oriented mobs, not sundry mobs. Some loot and carry was apparently involved in both instances. But in 2020, it appears that one of the mob objectives was to economically cripple minority locations that were hit. Shops, godowns, and small manufactories were particularly targeted.

The violence commenced on February 23, raged on through February 24 and 25, and simmered and eventually petered out by February 26, although there was tension and anxiety in the air even on March 7 when the PCI president, Anand K. Sahay, visited some of the worst affected area with colleagues to get a feel of the geography and social make-up of the communal battleground areas, and a sense of the public mood. 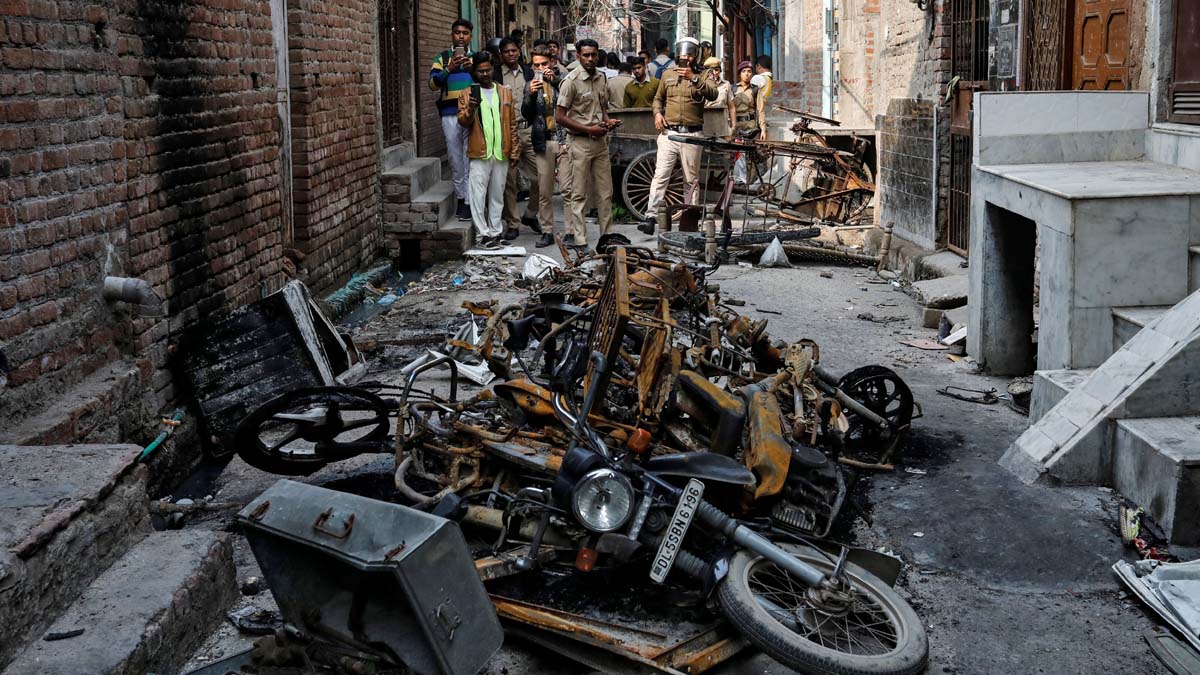 It became evident that while there were numerous examples of ordinary Hindus and Muslims protecting one another and each other’s religious places during the troubles, and some large-hearted Sikhs rescuing tens of Muslims from difficult areas as the flames of communal passion leapt, a sense of mistrust and disquiet remains, arising from fear of the State.

Sandeep, a Hindu resident of Janata Colony, a predominantly Muslim locality by the Peeli Mitti Road (near the Jaffrabad Metro Station), informed us that there were five temples in the by-lanes of this area and all were safe. Some of his Muslim friends said their area was untouched by violence but a palpable sense of fear of the future remains.

In Mahalaxmi Enclave, right next to Shiv Vihar where Muslim residents suffered incalculable harm, Rajpal Singh Sain, who is a non-Brahmin keeper and priest of the Jwalaji temple, informed us that the temple also drew Muslim devotees. They are from among the 20-odd Muslim houses of the locality. He said a Muslim mosque nearby and the Hindu temples of the area were quite safe.

On the main road just outside these by-lanes, at the Shiv Vihar ‘tiraha’ or tri-junction, stand two large-sized parking spaces full of charred vehicles, a reminder of dangerous gangs at work unhindered by the forces of the state, underlining the unquiet times the nation’s capital is passing through.

One of Britain’s most famous foreign correspondents renowned for his professional integrity, James Cameron, who was active in the years after the second world war and had reported out of New Delhi, once famously said, “I don’t let facts come in the way of the truth!”

This important journalist was known to peel through layers of facts to arrive at “the truth”. It is in this respect that the shortcomings of the media as an institution are visible in dealing with the turbulent times since December 2019, including the recent communal violence which caught international attention since the picture that came through was that a particular religious minority had been consciously targeted.

Intrepid reporters and photographers and videographers went out in the midst of violence, risking their life and limb. They brought back telling stories and visuals. And yet, our understanding of the troubled times Delhi has passed through appears seriously grossly inadequate. There are too many unexplained or under-explained aspects of the big story, too many gaps, which needed to be filled or looked into. Some can be enumerated as follows:

In a tense communal situation, this should have been easy enough to effectively patrol and control by a purposeful police force with a no-nonsense leadership. And this is exactly what happened once National Security Advisor was made to intervene. The trouble petered out as shoot-at-sight orders were passed.

Could this not have been done on the very first day, February 23, or latest by the following morning before the matter escalated and northeast Delhi came in the grip of communal violence of such magnitude that would bring shame to the country?

The mystery is why this was not done. To uncover the facts was beyond the experience and competence of the city reporters who were despatched on assignment to northeast Delhi. If journalists who routinely cover national affairs – in this case, the ruling party and the Union home ministry – had been pressed into service, a fuller picture is likely to have emerged.

A police DCP stood next to Mishra as this provocation was being uttered. An alert officer might have thought to place the politician under restraint for threatening trouble and threatening not to heed the police. This could have been interrogated by the media at the national political level.

Further, the violence kicked off shortly after the BJP leader’s speech, rendering Mishra’s so-called ‘grace period’ of 72 hours as a smokescreen to lull all concerned. Was the police really fooled? Or, did it pretend to be fooled? At any rate, the force deployment on the ground was extremely thin, going by eye-witness accounts as well as accounts of journalists- reporters and photographers- present at the spot.

The media has not sought to go into the reasons why the organised communalists got into action almost straight away instead of waiting for the time supposedly given to the police to clear the place of anti-CAA women protesters. It has also not sought to try and understand what gave Mishra the confidence or sense of authority to issue an ultimatum to the police?

Delhi has been in a tinderbox situation since the passing of the CAA last December, the erupting of protests against this law, the police inaction in JNU, police hyper-action in the case of Jamia, and the volatile communal speeches made by top leaders of the ruling party in the course of the Delhi Assembly election campaign. Given such a backdrop, the police was expected to keep a sharp eye out for any signs of potential communal trouble. The stocking of bricks and stones falls in this category. Media questioning is called for on the pre-violence preparation by Delhi Police.

For a day and a half, television stations friendly to the government showed a young man, purportedly a Muslim now in custody, running about with a pistol in hand but not doing very much with it. Details of his profile and his links are yet to emerge. Is he a gangster, a political worker of some kind, or a supposed agent of a foreign or Indian Islamist outfit? This is the direction in which the media have been sent by the police and some sections of the media are happy to give full play to police versions without any investigation on their part.

A man carrying a child walks past security forces in a riot-affected area in New Delhi, February 27, 2020. Photo: Reuters/Adnan Abidi

Similar is the case of the deceased Ankit Sharma, variously described as a driver employed by the Intelligence Bureau and an IB “officer” in some initial media reports. So, who was he? Was he killed by those who knew him for reasons of personal enmity? Was he targeted because he worked for the IB? This narrative is being sought to be developed in government-friendly media sections to suggest that the killing of a minor IB employee in the slums was a threat to national security. An impartial probe also needs to look into the allegation that this individual was also involved in stone-throwing. So little is known of his background and actions on those fateful days. A fuller media investigation can help us understand the situation better.

Surprisingly enough, the death of a policeman on duty- whether in stone-pelting or on account of a bullet fired is still not clear – is also sought to be given a national security colour, and is being linked with the IB employee’s murder to build a narrative of ‘national security under assault’. How valid is this approach? Media can contribute to our understanding of the terrible events by exploring the foundations or such a narrative and its foundational basis.

An AAP councillor – a Muslim individual – has been picked up by the police. His name is being bandied about in a section of the media as the riot-maker in- chief? This individual may have well played a negative role, but so far there is only the police version to go by. Independent media work is needed for greater clarity and greater credibility, especially since no prominent non-Muslims are presumed to be under investigation so far.