The Guild said it was deeply shocked at the police's action against journalists and said this was an attempt by the Tripura government to deflect attention away from its own failure to control majoritarian violence. 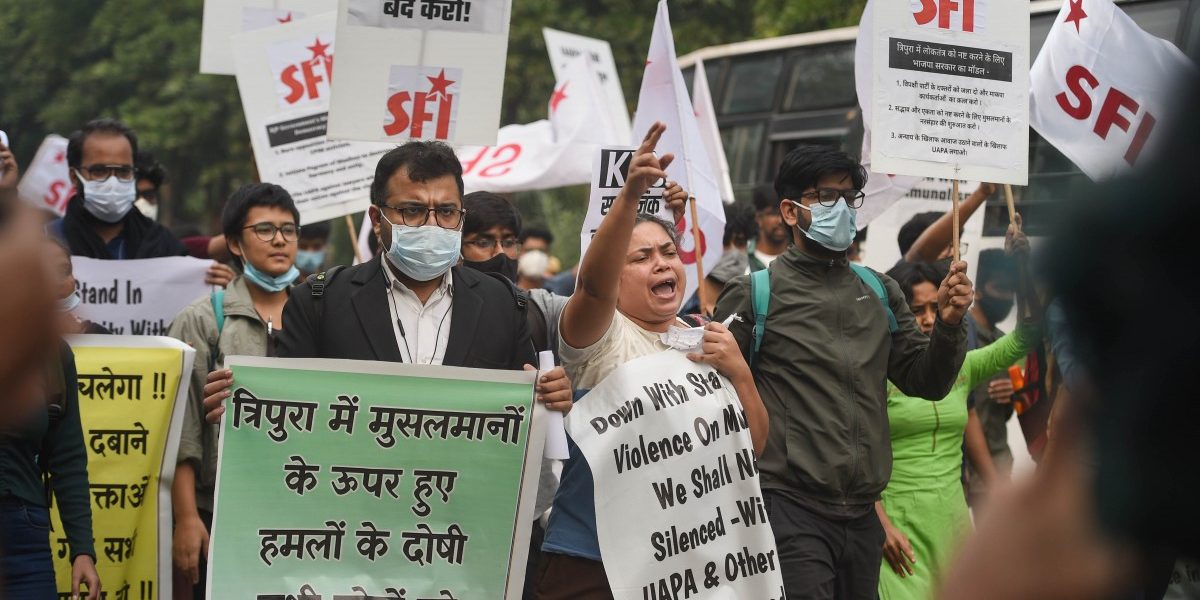 New Delhi: The Editors Guild of India (EGI) and the Indian Women’s Press Corps (IWPC) have condemned Tripura police’s action of booking 102 people, including journalists, under the Unlawful Activities (Prevention) Act, and said that the government cannot use such stringent laws to suppress reporting on communal violence incidents.

The Guild, in a statement, said it was deeply shocked at the police’s action against journalists and that it was an attempt by the Tripura government to deflect attention away from its own failure to control majoritarian violence.

Tripura police on Saturday booked 102 social media account holders under the Unlawful Activities Prevention Act (UAPA), criminal conspiracy and forgery charges, and served notices to the authorities of Twitter, Facebook and YouTube to freeze their accounts and inform all particulars of those persons to it.

This action came after Tripura police registered a case against four Supreme Court lawyers under the stringent act and various sections of the Indian Penal Code for allegedly promoting communal disharmony with their social media posts on the recent violence in the state targeting Muslims.

The EGI said, “The Editors Guild of India is deeply shocked by the Tripura Police’s action of booking 102 people, including journalists, under the coercive Unlawful Activities (Prevention) Act, for reporting and writing on the recent communal violence in the state.”

The Guild said one of the journalists, Shyam Meera Singh, has alleged that he has been booked under the UAPA for merely tweeting ‘Tripura is burning’.

The Indian Women’s Press Corps has also taken up Singh’s case and registered its shock and dismay at the fact that the journalist along with others was booked by Tripura police.

“Shyam Meera Singh has alleged that he has been booked for tweeting “Tripura is burning.” It is a journalist’s job to inform, to highlight and present true the picture of events. It is not the journalist’s job to please people in power,” the IWPC has noted.

“The charge of UAPA on Shyam Meera Singh is a clear attempt to silence journalists by misusing laws to intimidate them,” the Corps has said in a statement, demanding that all such charges be withdrawn immediately and media be allowed to do its work freely.

“This is an extremely disturbing trend where such a harsh law, wherein the process of investigation and bail applications are extremely rigorous and overbearing, is being used for merely reporting on and protesting against communal violence,” the Editors Guild also noted.

The Guild is of the opinion that this is an attempt by the state government to deflect attention away from its own failure to control majoritarian violence, as well as to take action against the perpetrators of this. Governments cannot use stringent laws like UAPA to suppress reporting on such incidents, it said.

The EGI demanded that the state government conduct an objective and fair investigation into the circumstances of the rights instead of penalising journalists and civil society activists.

Further, the Guild reiterates its earlier demand to the Supreme Court of India to take cognisance of the manner in which such laws are unjustifiably used against freedom of speech, and to issue stringent guidelines on charging journalists under them, so that these laws don’t become an easy tool for suppressing press freedom, it said.

A mosque was vandalised and two shops were set ablaze at Chamtilla in Tripura during a rally by Vishva Hindu Parishad on October 26, called to protest against the communal violence in neighbouring Bangladesh.

Three houses and a few shops, reportedly owned by Muslims, were also ransacked in nearby Rowa Bazar, according to police.

The state government had, on October 29, alleged that a group from outside with vested interests had hatched a conspiracy against the administration to create unrest in Tripura and malign its image by uploading fake photographs of a burning mosque on social media after the October 26 incident.

Note: This article has been updated since publication with details on the IWPC’s statement.