Bharti Jain, a journalist with the The Times of India, made serious allegations of financial misconduct against Amartya Sen, based on a viral WhatsApp forward. 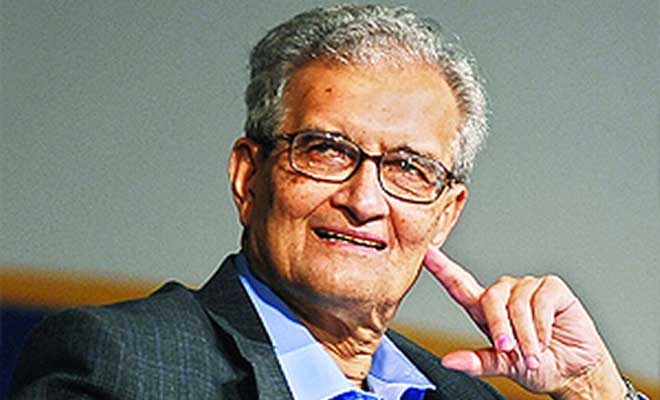 In a series of tweets, Bharti Jain, a journalist with Times of India, made serious allegations of financial misconduct and nepotism against Nobel laureate Amartya Sen and the management of Bihar’s Nalanda University. Her tweets claimed that after Narendra Modi’s election in 2014, the purported “fraud was stopped and Amartya Sen was thrown out of Nalanda University”. Jain ascribed this as a motive behind Sen’s criticism of the prime minister’s economic policies.

After a social media uproar regarding a lack of evidence to support her allegations, Jain clarified that her tweets were based on “sources” and not authored independently.

I am not the source of this tweet. Sorry but I should have mentioned ‘sources’ while tweeting

On being pressed about the alleged “sources”, Jain responded that these were government sources.

A short while later, the journalist deleted her tweets.

Incidentally, the allegations raised by Jain, ascribed to “government sources”, had been circulating on WhatsApp in recent time. They were given little credence until a journalist of a national newspaper decided to share the information, identical to the WhatsApp messages, on social media.

Jain is Editor, Internal Security at Times of India and as per her Twitter bio, she reports on the home ministry, security affairs, personnel ministry, Election Commission and the Parliament.

In this report, Alt News attempts to fact-check the barrage of allegations tweeted by Jain against Professor Sen and the Nalanda University. While doing so, apart from its own research, Alt News also reached out to Nobel laureate Amartya Sen.

“The Economist Amartya Sen was appointed as chairman of Nalanda Mentor Group in 2007 & made first Chancellor of famous Nalanda University(NU) in Bihar by Congress govt in 2012. He enjoyed a salary of Rs 5 Lakh per month, tax-free benefits, unaccounted foreign travels, meeting in luxury hotels, power to direct appointments, etc.”

The issue of Dr Sen’s emoluments was first raised by BJP MP Subramanian Swamy in 2015 when he claimed that Professor Sen drew an annual salary of Rs 50 lakh from Nalanda University. Various media outlets had published details of the University statement in 2015.

Nalanda University further clarified that the free travel pass was a gift to Dr Sen from the Government of India. Former Prime Minister Vajpayee had presented the pass to celebrate his Nobel Prize.

In an email response to Alt News, Dr Sen labelled journalist Bharti Jain’s allegations as “amazingly false”. He elaborated – “First of all, I received from Nalanda no salary whatsoever, and worked for zero remuneration. Second, I had ‘no tax-free benefits’ and there were no ‘unaccounted foreign travels’. Third, I was placed in hotels where the Board meetings were held and where other members of the Board (including representatives of the Ministry of External Affairs – when meeting outside Delhi) typically stayed.”

A Chancellor does not “run” a university. Unlike a Vice-Chancellor, a Chancellor is an honorary non-resident position. For instance, Venkaiah Naidu is the Chancellor of Delhi University. Section 14 of the Nalanda University Act (2010) passed by the Indian Parliament lays out the responsibilities of a Chancellor.

Section 15 states that it is the Vice-Chancellor who is the principal academic and executive officer and exercises control over the affairs of the Nalanda University and gives effect to the decisions of all authorities of the University.

“Regarding my presence at Nalanda, I attended all meetings of the Board and regularly visited the campus and the offices of Nalanda University in Rajgir and New Delhi, and had frequent meetings with the faculty and the students at Nalanda University. In common with Chancellors of other universities, the Nalanda Chancellor is not required to live in the campus (in fact, there is no allocated residence for the Chancellor in the Nalanda campus),” informed Professor Sen.

Regarding the appointments made by him, he stated, “it was part of my duty to help in the choice and recruitment of distinguished faculty members, and I tried to discharge my responsibilities as well as I could.”

While making this claim, Jain seemed to have confused the total budget set aside by the Government of India for establishing and running the Nalanda University with the actual expenditure made during Professor Sen’s tenure.

A question on the Nalanda University’s budget and expenditure was raised in Lok Sabha in April 2015. Minister of State for External Affairs Gen. V.K. Singh’s response to it was as follows –“An amount of Rs. 2727.10 crore has been approved by the Government for the establishment of Nalanda University, of which Rs. 47.28 crore has been released till date.”

Professor Sen’s response to Alt News was also on similar lines – “The planning, preparation and initiation of the new campus of Nalanda, being built on more than 500 acres of vacant land, started when I was Chancellor. Ms Jain has to distinguish between current expenditure and long-term investment.”

Alt News’s fact-check found that Sabharwal was the Vice-Chancellor of the Nalanda University and Sharma was the Dean of Academic Planning, however, no reference could be found in the annual reports of the University regarding Lahiri and Singh.

Alt News reached out to Professor Nayanjyot Lahiri who categorically denied any association with the University. In an email response to Alt News, she stated, “Actually, during the time that Professor Sen was the Chancellor, I served at the University of Delhi as Professor of History and for, a few years, as Dean of Colleges. At no point did I happen to be part of the faculty at Nalanda and nor have I earned even a rupee from that University in any capacity whatsoever. After leaving the University of Delhi, I joined Ashoka University in 2016.”

Alt News also reached out to Professor Upinder Singh, daughter of former Prime Minister Manmohan Singh. In a conversation with Alt News, she confirmed that she was never a faculty with Nalanda University, and neither did she receive any remuneration from the University.

In his email to Alt News, Professor Sen reiterated this point saying, “Neither Upinder Singh (Manmohan Singh’s eldest daughter), nor her friend Nayanjyot Lahiri, was a member of the Nalanda faculty at any time (though given their distinction, they could easily have been appointed at Nalanda, as they had been at Delhi University – they did not seek appointment in Nalanda).”

Interestingly, while the rest of the tweet thread is now deleted by Jain, this tweet can still be seen on her timeline.

In this tweet, she makes a serious allegation of fraud and the complicity of former Prime Minister Manmohan Singh by saying that his daughters were drawing a salary from the University as faculty members while staying in the US.

Jain was called out by several people, including senior journalist at The Hindu Suhasini Haider who claimed to have checked the allegation and found that both the daughter’s of Singh were never faculty members at the University at any point in time and one of them did not live in the US.

Bharti, please do check on your sources on this claim. Since it was coming from you, I made an effort to check, and neither people you named have been faculty at the University, and one of them doesn’t live in the USA at all. I urge you to revise the information.

Alt News reached out to Daman Singh, daughter of former Prime Minister Manmohan Singh. In a conversation with Alt News, Daman Singh stated, “I can confirm that neither I nor my sister Amrit has any connection to Nalanda University.”

Professor Sen responded to this claim stating, “This is also totally untrue. The two mentioned were never appointed faculty members of Nalanda University (they did not seek such appointment either). The question of their drawing a salary while staying in the USA does not arise (“drawing salary” for “honorary” appointments raises further questions of truth and falsehood).”

“After 2014, when Modi arrived, all these frauds were stopped and Amartya Sen was thrown out of Nalanda University. Since that day Amartya Sen began his trenchant criticism of Modi’s economic agenda. However, at the world level, he failed to impress any other economist against Modi.”

In response to a question regarding the factors that contributed to the exit of Dr Amartya Sen from the Nalanda University, Minister of State for External Affairs, Gen V.K. Singh’s response was as follows – “Prof. Amartya Sen was appointed as the First Chancellor of Nalanda University w.e.f. 18th July, 2012 for a period of three years. As his tenure of three years was nearing completion, Prof. Sen had publically declared that he wanted to exclude himself from being considered for continuing as Chancellor of Nalanda University beyond July 2015.”

Professor Sen responded to the allegation of being terminated from the University by stating, “In fact, I did not seek to continue as Chancellor of Nalanda University (even though the Governing Body had re-elected me to remain Chancellor). I was deterred not only by the Modi-government’s hostility to me but also by observing how terribly badly the Modi-government was treating this ancient (Buddhist-origin) university.”

Alt News checked for Dr Amartya Sen’s criticism of Narendra Modi before his term as the Prime Minister and found several examples.

The above fact-check proves from various sources that the viral WhatsApp forward quoted by Bharti Jain was completely baseless. In his email to Alt News, Professor Sen remarked,“Finally, I must say that I am quite impressed to see Ms Jain’s ability to pack in so many big and gross mistakes in so few words.”

While Jain’s tweet thread now stands deleted, the text has been picked up by the fake news ecosystem. Right-wing propaganda website, OpIndia has published an article on the ‘unholy nexus’ between Sen and Manmohan Singh, quoting Jain’s tweet about the latter’s daughters in the US. The website made no effort to fact-check the claim before making a serious allegation of fraud against a former Prime Minister and a Nobel laureate. The tweet thread has also been copy-pasted by several BJP supporters on Facebook to explain “the reason why Sen is a vocal critic of Modi.”

The misinformation continues to circulate on WhatsApp as well, and what were earlier nameless allegations, are now credited to Bharti Jain of Times of India as the source.