The report offers a look at the editorial management aspect of the photojournalist's fatal deployment and appears to admit shortcomings in risk assessments.

The circumstances that led to the Indian photographer’s death are still shrouded in uncertainty, but the special report contains hard-hitting footage (much of which was taken by Siddiqui himself) and satellite communication to draw a picture of his movements amidst conflict, until his final moments. Siddiqui was embedded with the Afghan Special Forces as it attempted to thwart the Taliban unsuccessfully.

The report makes the key revelation that Siddiqui was left behind along with two commandos who were with him as the Special Operations Corps withdrew from Spin Boldak, the Afghan forces “mistakenly thinking they had joined the retreating convoy.” A commander of the Corps and four witnesses of the attack all told Reuters the same.

The Reuters report attributes the abandonment to the confusion of a hasty retreat just before which Siddiqui, who had been injured by a shrapnel earlier, had been taken to a mosque for treatment.

But an examination of Siddiqui’s communications with Reuters and accounts from an Afghan Special Forces commander show that Siddiqui was first injured by shrapnel from a rocket. He was evacuated to a local mosque for treatment. And he was killed, according to the top Afghan officer, after being abandoned with two soldiers in the confusion of a retreat.

“They were left there,” Major-General Haibatullah Alizai told the news agency.

There have earlier been reports which claimed that the photojournalist had been executed by the Taliban and that his body had been mutilated in Taliban custody after his death. Reuters notes that the same has been told to the news agency by Afghan security officials and Indian government officials, but that the Taliban denied this, instead saying that Taliban fighters discovered his body with the injuries already there.

A British ballistics expert, meanwhile, told Reuters that it was evident upon analysis “that he was shot multiple further times after he was killed.” 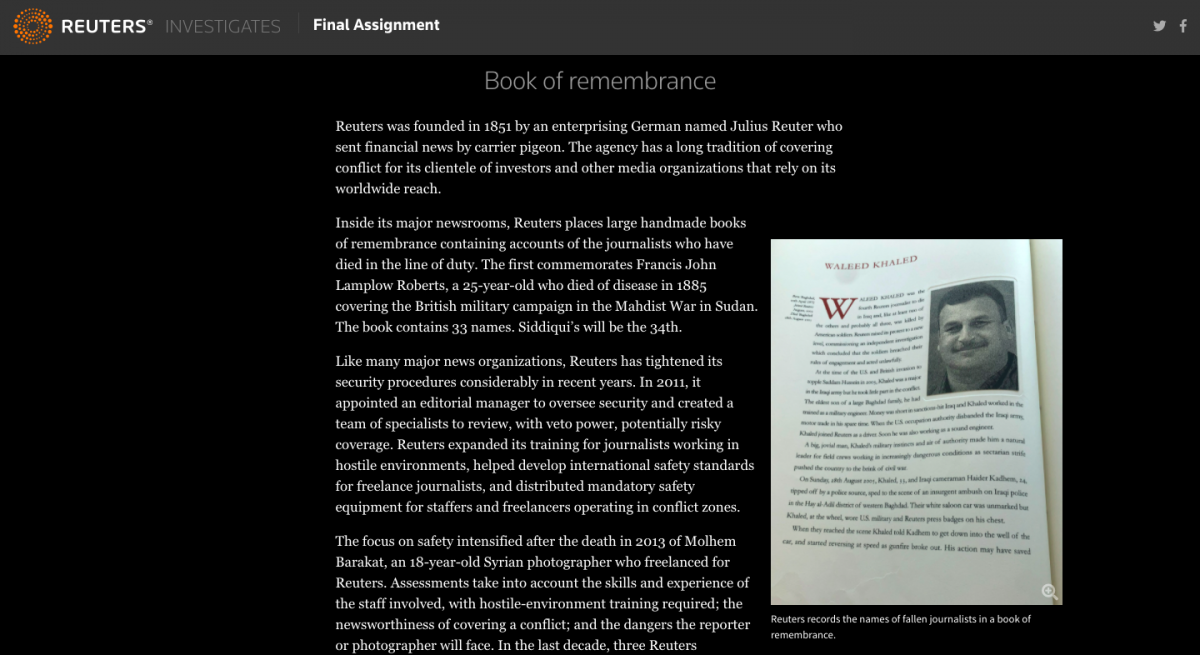 A screenshot of a section of Reuters’ report on Danish Siddique.

The report notes the gaps in Reuters‘ own assessment of the risks involved in Siddiqui carrying out his assignment and the reaction within the company, amongst Siddiqui’s colleagues and other employees, to the role their employer has played and its perceived inability to guarantee safety for him.

The piece, co-authored by Stephen Grey, Charlotte Greenfield, Devjyot Ghoshal, Alasdair Pal and Reade Levinson, notes that none of these authors had a role to play in the decision-making process that led to Siddiqui joining the Afghan forces at Spin Boldak.

The report offers a look at the editorial management aspect of such a deployment and appears to admit shortcomings in risk assessments – noting, for instance, that there was absence of an authoritative eye since the agency’s full-time global security adviser retired in 2020 and his position remained vacant.

The report also notes that interviews with Reuters managers and staff, and a review of email communications, indicated to the piece’s authors that editors in South Asia were not “part of the decision to embed Siddiqui with Afghan commandos and also had no advance notice of the Spin Boldak mission.”

The piece narrates messages Siddiqui sent to friends and colleagues during his time with the Afghan Forces, conversations he had where he assured dear ones that he would not venture into anything other than situations involving calculated risks and speaks of evidence that the Taliban took his phone after taking him in custody.

It also notes Siddiqui’s own body of work, the political impact his photographs have had on India and his own, quite enormous, courage.