A resident of Tatapatti Bakhal said residents were suspicious of health workers after fake videos started doing the rounds. 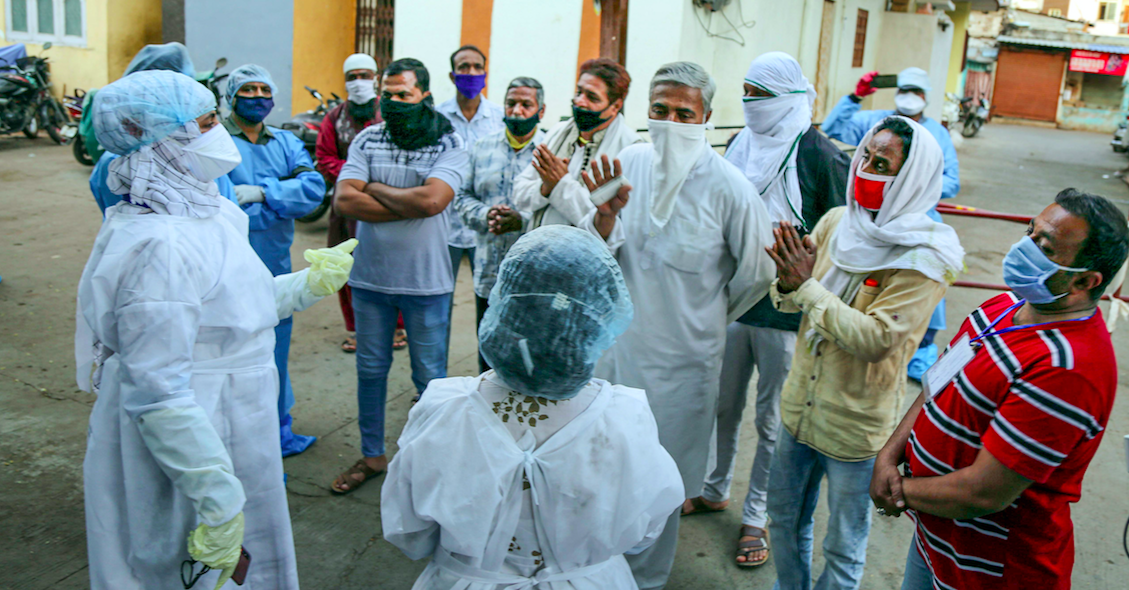 Representative image. Residents of Tatpatti Bakhal apologise to a team of doctors adayafter health workers were attacked by some locals who went there to screen residents in wake of COVID 19 pandemic, in Indore, Thursday, April 2, 2020. Photo: PTI

New Delhi: Fake videos that claimed that Muslims were being injected with coronavirus had been circulating through WhatsApp in Indore, where residents of a particular neighbourhood attacked a team of health workers on Wednesday.

An Indian Express report dated April 3 stated that that the fake videos may have been behind the attack, for which four people have been booked under National Security Act.

“Fake WhatsApp videos claiming that healthy Muslims are being taken away and injected with the virus have been doing the rounds of Tatpatti Bakhal and adjoining localities,” said the article.

The team of doctors, ASHA workers and revenue officials had gone to identify the family members of a 65-year-old man who died after having been infected with the coronavirus.

“They were cooperating in the beginning and answered a few questions before suddenly attacking us,” a member of the help team recounted to the Express.

A resident of Tatpatti Bakhal stated that the residents were suspicious of health workers after fake videos started doing the rounds.

With more than 75 COVID-19 cases reported in the city between March 24 and April 2, Indore in Madhya Pradesh has become the latest cause of worry for authorities.

Till now, police have arrested four people for the attack on the team and charged them under NSA. Earlier, the chief minister Shivraj Singh Chauhan had stated that those stopping doctors from their duty “will be strictly dealt with”.

More than 75 positive cases have been reported in Indore between March 24 and April 10 – most of them from 10 localities identified as Ranipura, Nayapura, Khajrana, Tatpatti Bakhal, Daulatganj and Silawatpura.

The surge in new cases were mostly in families whose members had reported positive. “In that sense the threat is limited to few localities,” said divisional commissioner Akash Tripathi.

He stated that the source of the infection was probably someone who had travelled to Dubai. The only international flight taking off from Madhya Pradesh flies between Indore and Dubai, as per the report.