If CNN Can Stand up to Trump, Why Can't Indian Media Question the Powers That Be?

Most Indian journalists are not truly independent but are under the thumb of the proprietor – the same proprietor who kowtows before political leaders. 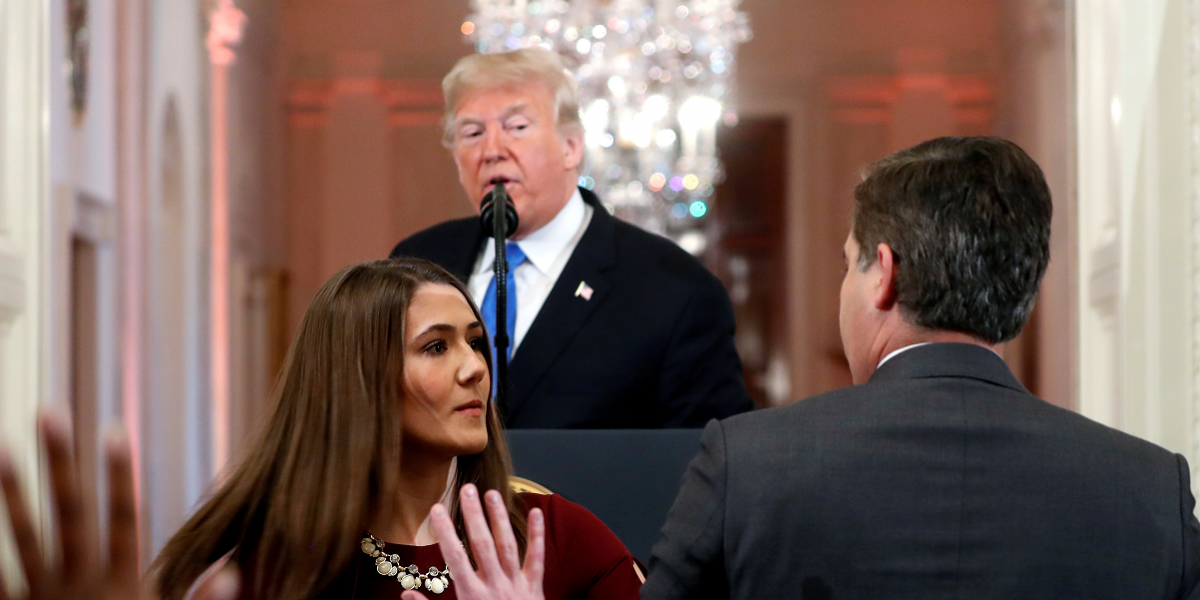 A White House staff member steps in to try to take the microphone away from CNN's Jim Acosta as he questions US President Donald Trump during a news conference. Credit: Reuters/Kevin Lamarque

CNN’s decision to file a lawsuit against the White House for suspending the press credentials of senior correspondent Jim Acosta has created an uproar in the US – and most Americans have come out in support of the broadcaster.

How likely would something of that sort be in India? During the Emergency of 1975-77, when freedom of speech and of the press were suspended by Indira Gandhi, the nation’s media crawled when it was only asked to bend, as L.K. Advani famously put it.

In 2014, senior journalists Rajdeep Sardesai and Sagarika Ghose left CNN-IBN (now CNN News18) when Mukesh Ambani – who has the ear of Prime Minister Narendra Modi – took over the channel. Modi was reportedly unhappy with Sardesai for asking embarrassing questions about the Gujarat riots of 2002. There was not even a whimper from the press.

Karan Thapar’s show on India Today TV was not renewed by the channel’s management, and it is well known that Thapar had annoyed Modi while interviewing him.

Cartoonist Satish Acharya was told that he was no longer needed by Mail Today after multiple disagreements over cartoons that questioned the government. Again, pin drop silence.

Punya Prasun Bajpai and Milind Khandekar were dismissed by ABP due to political pressure, and after a brief outcry there was acceptance of the fait accompli.

Many people have asked why the Indian media does not act bravely, the way CNN has done, and I would like to hazard my opinion.

1. Indian public opinion is not as strong as in the US or other developed countries. Here, most people would not like to cross swords with the authorities.

To give an example, when Indira Gandhi imposed the Emergency in 1975 (to save her chair, not because there was any real emergency in India), and suspended all fundamental rights and imposed strict censorship on the media, there was hardly any mass opposition. Most people quietly their fate, the only exception being the brave Ramnath Goenka and his Indian Express Group, who had to pay a price.

Had such a thing happened in the US or Europe, there would likely have been widespread agitations and resistance

Also read: Slow News Day? Invent a Fatwa. Here’s How ANI Did It.

2. While both the Western and Indian media are owned by businessmen, Western businessmen do not kowtow before political leaders as often. Rather, in the West, it is politicians who often bow before businessmen.

There are many reasons for this.

First, in India, if a businessman annoys those in power, leaders often unleash the Central Bureau of Investigation, income tax and customs authorities or Enforcement Directorate him or her. It is well known that these officials are “caged parrots” (as the Supreme Court has called them) and will do the bidding of their political masters, often even to the extent of manufacturing fake evidence.

In Western countries, on the other hand, bureaucrats are much more professional. For instance, if Donald Trump orders the Federal Bureau of Investigation or the Internal Revenue Service to hound CNN, it is unlikely they will do his bidding.

Third, most Indian journalists still have a colonial mindset, though India became independent in 1947. They often have an inferiority complex before a minister or an IAS officer  unless he is in their pocket). So they rarely have the courage to oppose him, as CNN has done.

Also read: For Democracy to Survive, Attacks on Journalists Must End

3. In the US and Europe, most journalists like Anderson Cooper, Bob Woodward, Barbara Walters, Christiane Amanpour, Farid Zakaria and others, though employees, would not blindly accept the bidding of the media house owners, and the owners have to treat them with respect. Such journalists are strong personalities, and have their own ethics and professional standards which they insist on maintaining.

Thus, in the case of CNN, my guess is that the owner, Ted Turner, must have consulted renowned journalists who would have told him that the whole organisation must stand behind Jim Acosta, and fight to uphold First Amendment (freedom of the press) rights.

In India, no media owner, not even the biggest, would dare to do something like that. Here, most journalists are not truly independent but are under the thumb of the proprietor – the same proprietor who kowtows before political leaders.