Ahan Penkar was reporting on the alleged rape and murder of a Dalit girl and protests against police inaction. 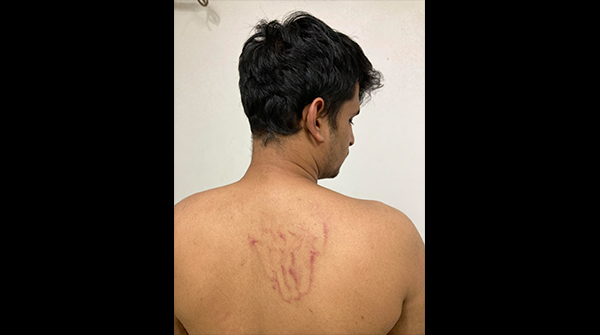 New Delhi: A reporter working with the Caravan magazine, Ahan Penkar, was allegedly assaulted by a police officer and then detained while covering a story in north Delhi on Friday. Penkar was working on a story on the alleged rape and murder of a 14-year-old Dalit girl in the area.

Caravan tweeted about the incident, including an image of injuries on 23-year-old Penkar’s back. “Today afternoon, Delhi Police assaulted @thecaravanindia’s staffer Ahan Penkar while he was reporting. ACP Ajay Kumar kicked & slapped Penkar inside the Model Town station premises. Penkar repeatedly told the police that he was a journalist and prominently displayed his press ID,” the magazine said.

Penkar was reporting on a protest concerning the alleged rape and murder of a teenaged girl in North Delhi. Students and activists had gathered outside the Model Town police station to demand the registration of an FIR in the case.

The journalist was attacked by Additional Commissioner of Police, Model Town, Ajay Kumar, despite him saying that he was a journalist doing his job. “The ACP kicked me in the chest. I’m shaken. He threatened to beat us with a steel rod,” Newslaundry quoted Penkar as saying. “They lifted me by my trousers and took me inside the station. I was forced to delete the videos and photos from my phone.”

A group of citizens was protesting in Model Town against alleged police inaction in the case. “…no FIR has been lodged so far because, according to Penkar, the police claim the girl’s death was a suicide, not a murder,” Newslaundry reported. Penkar was covering the protest when the police officer allegedly assaulted and then detained him.

According to Penkar, he wasn’t the only person to be beaten up by Kumar at the site. Two other persons were also attacked, while a constable and and two inspectors watched. “One of them was a Sikh. The ACP took off his turban and beat him. He stepped on the neck of the second man,” he told Newslaundry.

Penkar has detailed the violence in a complaint filed to Delhi’s commissioner of police, S.N. Shrivastava. “I have injury marks on my nose, my neck and my back from the brutal assault by the Delhi Police upon us,” his complaint reads, while detailing how Singh allegedly pushed him to the ground, hit him repeatedly on the back and stamped on his ankle.

Penkar has filed a complaint to SN Shrivastava, Delhi’s commissioner of police. pic.twitter.com/ywR05QuAQc

ACP Kumar had made the news for the wrong reasons before too, in December 2019. A video of him allegedly asking students to vacate their PG rooms in Mukherjee Nagar went viral, after which the police claimed the video was doctored.

About two months ago, three other Caravan journalists had also been attacked while doing their job and reporting in North-East Delhi, on the aftermath of the communal violence in the area.

This is the fourth journalist of Caravan getting attacked in three months in Indian capital. And a Delhi Police officer in uniform assaults the journalist inside the station for following up on a 14-year girl’s death which the family says was rape&murder? https://t.co/U4444W07Su