Journalists in various parts of the country have been detained for various durations for covering the protests. 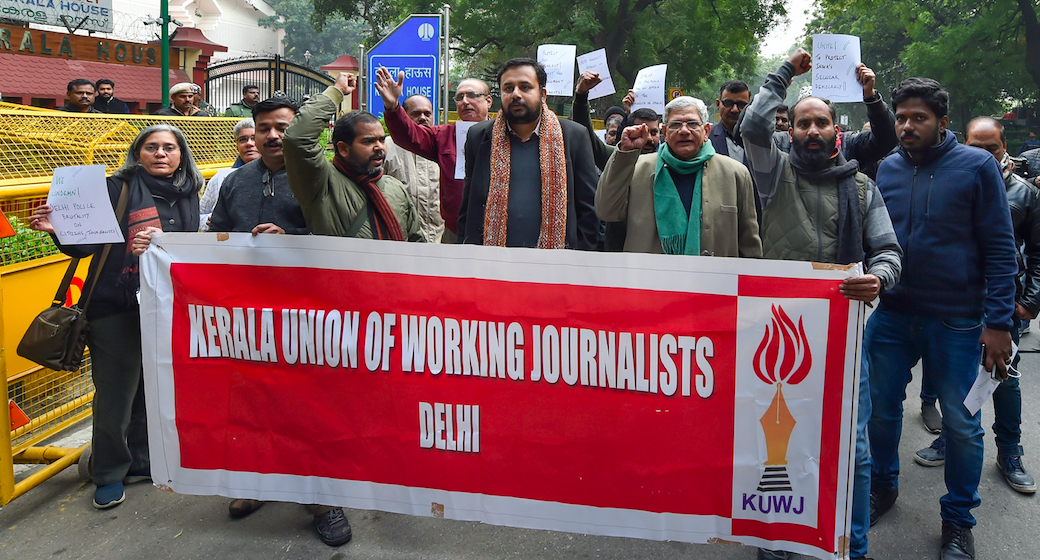 Members of the Kerala Union of Working Journalists with Sitaram Yechury, on December 20. Photo: PTI

New Delhi: Journalists in Delhi, under the aegis of Kerala Union of Working Journalists (KUWJ), on Saturday staged a protest against alleged police brutality on reporters and video journalists covering anti-Citizenship Amendment Act protests across the country, particularly in states such as Delhi, Karnataka and Uttar Pradesh.

“The reports of violence have all been coming from BJP-ruled states. In non-BJP ruled states it has been by and large peaceful. Today [Saturday, December 21] there was a very big bandh is happening in Bihar. Not one report of violence has come so far. So it is very clear who is encouraging violence. The truth has to be told to the people,” Yechury said.

Mangalore police have detained two journalists for not having accreditation cards.
However, they were from a reputed media house in Kerala.
Kerala Union of Working Journalists will hold a protest March in Thiruvananthapuram against this police action. #Mangaluru pic.twitter.com/j3mt3tzD0I

They protested the attacks by Delhi Police against two journalists in Mathrubhumi News, detention of eight journalists in Mangaluru and the harassment met by senior journalist Omar Rashid in Lucknow among other incidents of attacks on press freedom.

In Uttar Pradesh, The Hindu reporter Omar Rashid was taken in for questioning in a process he called deeply humiliating.

Meanwhile, scribes from Kerala who interviewed relatives of those killed in the December 19 police firing in Mangaluru during protests against the CAA were detained by the law enforcers on Friday, leading to protests in Kerala.

The issue echoed at the highest level in the two states, with Kerala chief minister Pinarayi Vijayan taking up the matter with his Karnataka counterpart B.S. Yediyurappa.

Eight journalists and camera crew of Kerala-based TV channels, who had interviewed relatives of those killed in the December 19 police firing during protests against CAA were released seven hours after being detained by police in front of the Government Wenlock hospital in Mangaluru on Friday, sources told PTI.